A Beacon Of Hope

On a chilly, overcast day last November, a group of drag racers started their cars, and in two rows, solemnly and slowly inched their down the drag strip at Beacon Dragway just outside Paducah. The loudspeakers overhead rang out with Lynyrd Skynyrd’s “Free Bird.” If I leave here tomorrow, would you still remember me? For I must be traveling on now, ‘cause there's too many places I've got to see.

Spectators lined the chainlink fence next to the track, many shedding tears. The cars rolled by in pairs with the exception of the lead car, an orange Camaro Z-28. In the lane next to it was no car. “You notice in this missing man formation that the orange Z-28 Camaro has no car next to it,” a voice rang out through the loudspeakers. “That is the missing man in tribute to Mark.”

Mark Lynn had been a fixture at Beacon for years. “There’s a guy out here called G-Daddy,” says Mark’s wife, Tammie. “G-Daddy was racing, and we came to watch him and were spectators.” Mark and Tammie rooted for their friend and got to know others who raced regularly. By the fall of 2013, Mark and Tammie were Beacon regulars. Mark also noticed a change in his health. That September, doctors discovered brain tumors, and he was diagnosed with cancer. It was estimated that he had eighteen months to live.

“He’d always wanted to race,” says Tammie. “So we bought a car for him.” Mark and Tammie worked on the Camaro together, spending as much time as possible with one another, racing it on the weekends. Mark started chemotherapy, and when his strength wasn’t enough to drive, Tammie filled in. She also raced her own car in the street/trophy division. “So I picked it up, too,” she says.

“It was a little scary the first time,” laughs Tammie. “I don’t let a lot people intimidate me, but it is a man’s world out here, and there are a lot of younger people. So when you get a forty-seven year old woman out here, they may think they can beat me! But I’ve always liked cars and loud cars, too. So I was going to do it. I love it all, even the smells and the burning rubber. I guess it’s all the things that women aren’t supposed to like! And Mark loved it. And I loved seeing him happy. Every Saturday gave him something to look forward to. Even when he didn’t feel good, he wanted to be here. It makes a huge difference to have something like that when you have a terminal illness.”

“Mark would get treatments on Friday and be out here on Saturday,” says a fellow racer who wishes to remain anonymous. “He was something else. There is nowhere else he wanted to be. He wanted to be around this family.”

And with Mark’s passing nearly three years after his diagnosis, the drag racing community surrounded Tammie, propped her up, and helped her continue to race in Mark’s honor. “Before Mark passed on October 30th,” adds the friend, “he’d been talking about taking the motor out of his car and making it a little bit quicker. So in December, we pulled out the engine and transmission. They were just old and tired. It was going to take more to fix what she had than if we’d just done something different. Then, people in the racing community started offering up stuff. One racer just gave Tammie an engine block. So we’ve been working on this build for her. Bless her heart. She’s going to wind up with a pretty good car with a great motor and transmission. And this is very much a tribute for Mark, too. I’m so glad she stuck with it.”

“We’re a family here, and I don’t take that for granted,” says Tammie. “They mean the world to me. And they loved Mark. And I know he’d want me out here doing this.” 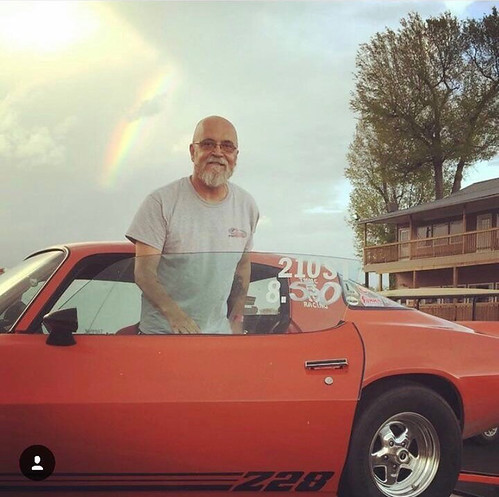