A Dickens of a Dessert

After hearing about the popularity of Christmas Pudding (a dense, holiday cake dessert) in Britain, we quickly rushed off to the the Paducah Life test kitchen to create one of our own. The result was a tasty dish that will no doubt become one of our favorite holiday traditions!

The pudding preparation begins on stir-up Sunday (the last Sunday before the Advent season). It is then stored until it is steamed one last time on Christmas Day. A key ingredient is suet, which can be found at most butchers. We procured ours for less than a dollar at Hughes Meat Market in West Paducah.

Didn't get started on stir-up Sunday? No worries. Several British chefs claim that the waiting period is probably unnecessary. Others state that the time is needed to allow flavors to meld and the brandy to infuse all the ingredients. Even so, a couple of weeks before Christmas would probably be sufficient.

For this recipe, we used a 2qt Mason Cash pudding basin, although any comparable bowl which can be used for cooking would be suitable.

Place the dried fruits, candied peel, apple, orange and lemon juice into a large mixing bowl. Add the brandy and stir well. Cover the bowl with a clean tea towel and leave to marinate for a couple of hours, preferably overnight.

Stir together the flour, mixed spice and cinnamon in a very large mixing bowl. Add the suet, sugar, lemon and orange zest, bread crumbs, nuts and stir again until all the ingredients are well mixed. Finally add the marinaded dried fruits and stir again.

Beat the eggs lightly in a small bowl then stir quickly into the dry ingredients. The mixture should have a fairly soft consistency. Now is the time to gather the family for Christmas Pudding tradition of taking turns in stirring, making a wish and adding a few coins. Spoon the mixture in to the greased pudding basin, gently pressing the mixture down with the back of a spoon. Cover with a double layer of greaseproof paper or baking parchment, then a layer of aluminum foil and tie securely with string. 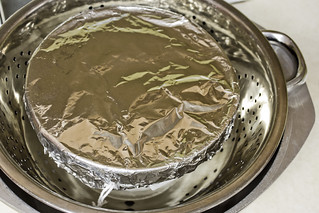 Place the pudding in a steamer set over a saucepan of simmering water and steam the pudding for 7 hours. We placed a colander in a cast iron pot, suspended from the rim. Make sure you check the water level frequently so it never boils dry. The pudding should be a deep brown color when cooked. The pudding is not a light cake but instead is a dark, sticky and dense sponge.

Remove the pudding from the steamer, cool completely. Remove the paper, prick the pudding with a skewer and pour in a little extra brandy. Cover with fresh greaseproof paper and retie with string. Store in a cool dry place until Christmas day. Note: The pudding cannot be eaten immediately, it really does need to be stored and rested then reheated on Christmas Day. Eating the pudding immediately after cooking will cause it to collapse and the flavors will not have had time to mature.

On Christmas day reheat the pudding by steaming again for about an hour. Serve with brandy sauce, if desired. Tradition calls for a holly sprig to adorn the pudding. Pour extra brandy over the pudding, light it, and present it in a dark room.

Left over Christmas pudding can be reheated by wrapping tightly in aluminum foil and heating through in a hot oven. 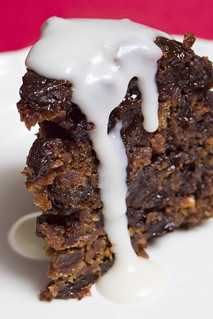