Allison and Greg Kelly created a winter wonderland for their holiday celebration.

In late December, most would expect to hear sleigh bells amid the flagrantly magical holiday season. But on December 28, 2013, Allison Wilson and Greg Kelly were hearing wedding bells instead. Choosing to incorporate the enchanting spirit of the season with their wedding theme, the couple tied the knot it their own creation of a winter wonderland.

A backdrop of Christmas trees adorned with sparkling white lights and snow glittered pinecones offered a remarkable backdrop for the ceremony. Not wanting to be too “Christmasy,” the bride traded the typical red and green color scheme for shades of brown, champagne, gold and silver. “The church’s decorating committee had used several of the metallic colors to decorate the church for Christmas a few years ago and I just loved the way they looked together,” Allison explained. 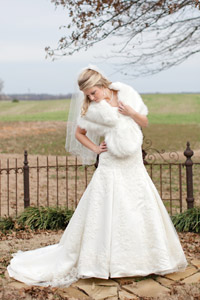 The ceremony music also reflected the special time of year, including “Silver Bells Instrumental” for the seating of the family and “Jesu, Joy of Man’s Desiring” for the bridal party. The bride walked down the aisle to the tune of “Christmas Cannon” wearing an ivory Oleg Cassini gown with a sparkly belt and scalloped, beaded veil. She also wore two strands of pearls; one had belonged to her late great-aunt and was given to her by her grandfather, and the other was a gift for her 16th birthday from her grandmother.

The bridesmaids wore one-shoulder, chocolate dresses with champagne sashes embellished with sparkling broaches, and carried bouquets of white carnations and winter greenery. Adding to the elegance, the groomsmen wore black tuxedos with ivory shirts and brown vests and ties.

After the ceremony, the reception commenced in the Columbus-Belmont State Park Activities Building, where the bride showed off her second dress of the night—a short, gold-sequined party dress that was perfect for dancing and celebrating. A four-layer, ivory wedding cake decorated with glittering white poinsettias was also on display, and was accompanied by a collaboration of homemade pies at the groom’s request.

Greenery, glitter, and metallic touches provided glamorous elements while assortments of candles added warmth to the night. “Greg loves the outdoors and I love all things sparkly, so the woodsy winter wonderland was a good combination,” said Allison.