A Passion For Pizza

Passion is a member of the household of destiny. It is an inescapable love that drives, defines, and molds a life into work of art. For Terry Anderson, it comes topped with cheese and pepperoni.

Terry's passion is pizza. And his life's work, his destiny, has fed Paducahans some of tastiest pies around for 25 years.

"I started making pizzas when I was fourteen," Terry recalls. "I got the basics of it down, and then I made them my own."

Terry gravitated to deep dish and rolling the edges of dough to create a thick and chewy breadstick at the end of each slice. He worked for a time in pizza parlors but never really considered it to be a career.

"I've had other jobs," he says, "and even owned a fireplace store here in town for a while. But no matter what I've done, I always come back to pizza."

Terry leased the Twinkling Star building, crafting his pies under the name Twinkling Star Pizza. But another location began to garner his attention. "I drove by the place everyday," he recalls, "and I really felt like I had a vision of what it could be. So one day, I stopped by, and I was told it was for sale. So I bought it!

"The building was 50 years old. It was an Avondale grocery store originally, but it had been all kinds of things since then, mostly bars. Some were pretty rough. It was the Fisherman's Wharf when I came along."

Terry went to work on what he describes as a broken, shoe-string budget. Before long, Pizza by the Pound took shape at the corner of North 32nd and Trimble Streets.

"I wheeled and dealed everywhere I could," he says. "I traded an old Volkswagen for prep tables and did everything myself. I cooked and cleaned and did whatever I could to make it work. I bought a television that I had to make payments on and put it in the corner."

The hard work quickly paid off. New patrons quickly discovered Pizza by the Pound and fell in love with Terry's handiwork. Terry hired more staff, created a new atmosphere for the restaurant, and paid off the television that still works and hangs in the corner to this day. 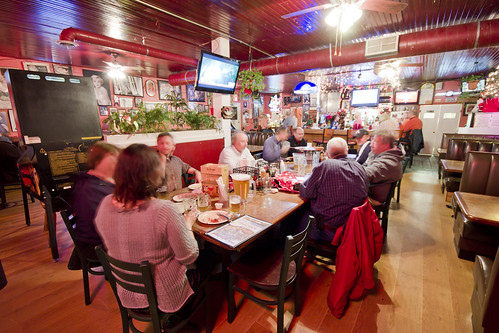 The name Pizza by the Pound sprang from Terry's preferred pizza-making style, which is loaded deep with toppings. His signature house pizza turned out rather weighty, and, when placed on the scale, clocked in at eight pounds. Terry even turned it into a contest.

"The eight pound pizza really feeds about five people," he says, "but we do offer a prize of $100 to any one person who can finish it in a one hour sitting. I've had a ton of challengers, but only a few have been successful!"

The few have all been competitive eaters, some professional. One finished the eight pound challenge in about ten minutes. Sonya Thomas, professional competitive eater, stopped in at Pizza by the Pound to give it a shot. "She finished in about twenty-two minutes," laughs Terry. "I'm not surprised. She has a bunch of world records. But still, that's a lot of pizza. Just one slice is a pound!"

Most patrons don't tackle the challenge, however. They just want another slice of the pizza Terry made famous. 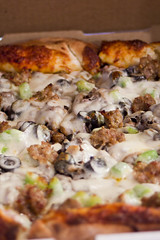 "It is an art," he says. "You can't just put it together. I have some great employees here who understand that. Most of them have been here ten, fifteen years or more, so they get it. We don't reinvent the wheel here.

"And I still enjoy it. A lot of our regulars have become friends. I'm still around everyday, doing a little bit of everything, even washing dishes. I just know that no matter where my life goes, it always comes back to pizza!"