A Stitch In Baseball History

As Dennis Biddle traveled the country with former Negro League baseball players, he started to realize the preciousness of the time they had together. Dennis, who was the youngest player to ever enter the Negro League, played for the Chicago American Giants at the very end of the league's era in the early 1950s. In 1996, he formed the organization Yesterday's Negro League Baseball Players in order to represent and band together surviving players.

"I was watching them all get older," says Dennis. "So as I traveled and saw them across the country, I wanted to make sure I got their autographs. I carried fabric with me and had them sign it. I didn't know if it would be a quilt or a wall hanging or what, but I wanted to get those preserved."

Dennis, now 81, has since seen many of the players pass away. "There are fifty-six left," he says, "and thirty-one of those are over 90 years old." Dennis took the fabric and had them made into three, wall-hangings. His thoughts were to perhaps auction one or two of them off at some point. Then, he met Betty Dobson with the Hotel Metropolitan.

"Betty called about the hotel in Paducah," he says. "She was looking for information on any Negro League players who had stayed in Paducah. And of course, some of them had. It was the only place they could stay overnight if they had to stay in Paducah."

Betty recalls her connection with Dennis. "Reverend Donna Hawkins had been in Florida and met former player Arthur Hamilton who said he had stayed at the hotel. I tracked Mr. Hamilton down, and he said he'd be willing to come visit Paducah, and he thought I should talk to Mr. Biddle. After the hotel was up and running, Mr. Biddle called and said, 'I'm going to send you something.' And here the quilt is!"

Some of the players who have signed, like Arthur Hamilton and Sherman Brewer, have been to Paducah and visited the Hotel Metropolitan after its renovation. "Mr. Brewer was also a Harlem Globetrotter," adds Betty. "Some of the players did both so they could be employed all year round. It's an honor to bring this piece to the hotel and recognize their place history and these player's connections to Paducah."

Most of the players who signed the quilt are now gone, but their memory is not. Through the efforts of Mr. Biddle, their legacy lives on, and a bit of baseball history is now housed in Paducah at the Hotel Metropolitan. 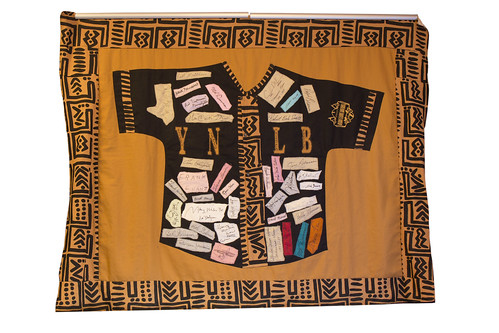