Valerie Rowe Megson drifts somberly among her herd of foals in west Marshall County. Memories flood her mind as she surveys the solemn faces of these young, rare horses.

She pauses for a moment, lifting a hand to the soft cheek of one her babies as she calls them. Her eyes grow damp. They've always meant the world to her, but she never imagined how much they'd help in these difficult moments.

Valerie's love affair with horses began with her dad, Paul Megson, a thoroughbred trainer. "He took me to a Keenland sale when I was twelve," recalls Valerie, "and I absolutely fell in love with this white horse that was up for auction."

Berva Megson, Valerie's mother, spoke quickly to temper her daughter's enthusiasm. "We told her it probably wasn't a white horse," she says, "and that is was more than likely just a gray one."

Valerie learned that while a horse's hair may be white, a true white horse will have unpigmented skin. The majority of white-haired horses have dark skin, which places them into the gray category. White horses are very rare.

"She insisted and drug us over there," laughs Berva. "Sure enough, it was a white horse."

Paul looked into the gleaming eyes of his little girl. As a glorious smile burst across her face, he made up his mind. This horse would be hers.

"This was the first horse my dad bid on where he got really competitive," says Valerie. "And the price just kept going up. I got nervous! He got it for me, however. It turned out to be the top sale of the day."

"The president of Keeneland came out," adds Berva, "and he said it was a Shirley Temple moment."

"It was a fairly tale moment for sure!" exclaims Valerie. 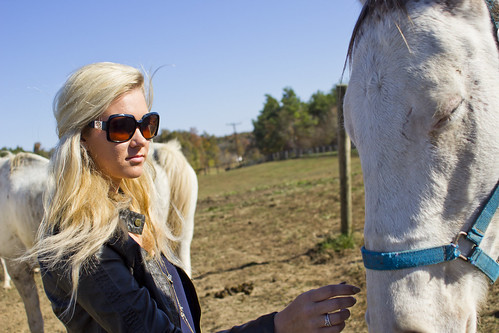 While the family was well-accustomed to raising and training thoroughbreds, they entered a whole new realm with one of the most rare breeds in the world. "Of 2.2 million registered thoroughbreds in the world, only 149 have been registered as white," explains Bertha. "Only three lines produce white. Two of them have been figured out, genetically. This one hasn't been cracked yet. We've been working with U.C. Berkeley on the genetic research. They aren't sure why this line will throw this color."

A few of the herd actually have dark hair with some being nearly all black or brown. Yet they carry the right gene to produce white horses.

Valerie's new horse came from a line that was raised by Kentucky Governor Brereton Jones. Others from the same line were living on a farm in Oregon, and the Megson family decided to add more to the herd by bringing them to to Marshall County when their owner decided to retire. One of those horses was Arctic Bright View.

"We had one of our horses at a racetrack," says Berva, "and the Disney folks were there working on Secretariat. Not long afterward, we got a call, and they wanted to come out and look at our white horses. They were very secretive and wouldn't tell us what for. Finally, they told us it was for the Lone Ranger movie and that Johnny Depp was going to be in it. They liked Arctic Bright for the role of Silver because he was all white, and they wanted to buy him. But we just couldn't sell him. They really wanted him for the movie, so we agreed to lease."

"The Disney wranglers trained him," adds Valerie. "He learned how to take your hat off and put it back on your head. He danced around. And he can do the whole Hi-Yo Silver thing!"

"He became a celebrity," laughs Berva. "He traveled, and a lot of people wanted to see him. He made appearances to help raise money for riding therapy programs and wounded veteran programs." 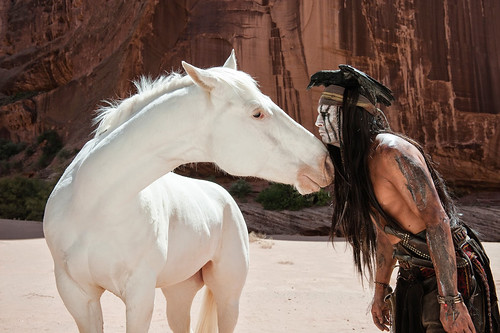 In no time, Megson Farms had a celebrity on their hands. Arctic Bright View had been transformed into SIlver, one of the most famous white horses in modern history.

While Arctic Bright was filming in the southwest and making appearances all over North America, the Megsons set to growing their herd through their first breeding season. "This is something that pulled us even closer together," says Bertha. "We did this as a family. It was an adventure for us."

Then, at the dawning of a new day for the family and this rare breed of horses, tragedy occurred. On the afternoon of August 28, 2014, in a downpour of rain, a tractor-trailer struck the Megson's truck, killing Paul and severely injuring Berva and son Donald.

Valerie, who had just left for UK to begin studies in the equine program, rushed home. "It was devastating," she said. "We just didn't know what to do. We were at the beginning of growing the herd, and then the accident happened. I was overwhelmed."

In the midst of immense suffering, however, Valerie discovered radiant beams of light. "Right away, the community rallied around us," she recalls. "They came together to take care of the horses. People bush-hogged, fixed fences, and even donated grain.

"And I was comforted so much by the horses. We had used them to promote equine therapy. I didn't really know how much that would mean to me personally. We have these new babies, and they are all absolute sweethearts. They mean so much to me, and they have helped me through this in a way I could have never imagined."

Berva and Donald, both facing long recoveries, were able to eventually come home and join the rest of the family. And yet the whole time, the future of the herd was never in doubt.

"We are just getting started," says Valerie. "We want to expand and make it bigger. And I don't take it for granted. It is an exciting life with these horses!" With the first crop of babies, Megson Farms grew into what is probably the largest herd of white horses in the world.

Valerie's first step on the journey had indeed been a fairy tale moment when she spied the noble white thoroughbred gleaming in the sun at Keeneland. It was a magic moment between a little girl and her horse. Now, the owner of a whole herd of white horses, Valerie knows they stand in honor of her father and an allurement that cannot be fully explained.

"The white horse is simply magic," she says. "The good guy always has one. They are always paired with the princess. From Biblical days all the way to Disney, the white horse takes the lead and stands for the pure and the good. It is amazing to look out and see twenty of them galloping across the field. They mean the world to me!" 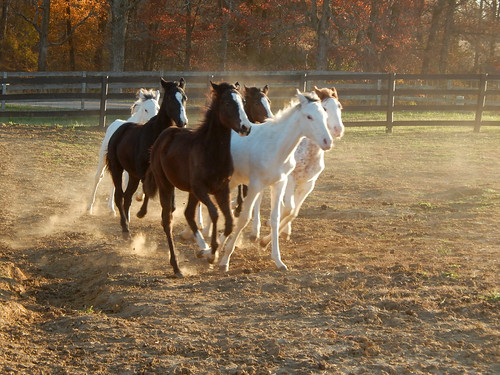