When Kerie Crawford turned 40, she didn't give the number much thought. An active cyclist, a lover of travel, and always young at heart, she anticipated no major changes to her lifestyle just because of age.

Her doctor reminded her of the importance of mammogram tests, however, especially considering that the rate of diagnoses of breast cancer in women increases with age. She immediately followed the doctor's advice and scheduled an appointment.

"I got that done, and his nurse called me and said I needed to do another mammogram," says Kerie. "I had the second mammogram and an ultrasound. Immediately following the ultrasound, a nurse came in. She was so sweet and soft and tender as she said, 'I have some bad news.' She would lean in and put her hand on me as she talked. I had a pretty good idea then that I had cancer."

Kerie contacted Dr. Daniel Howard through Lourdes for a biopsy. "I got the official diagnosis on April 1st. That's just how the universe works in my life. It was April Fool's Day! It was invasive lobular cancer in stage two. It doesn't make lumps, so there's no way I would have found it with self exams until it was pretty far progressed. So I wouldn't have known without the mammogram."

With no family history of cancer and no experience with cancer with anyone close, Kerie was starting from scratch. "I didn't know much. I didn't know that language. It was a matter of doing what I had to do. What's the next step? What do I have to do to get through this? I'd have a bad emotional day from time to time, but my friend would remind me that I was doing what needed to be done to survive for myself and my family. And I'd then think, 'Oh yeah. This can kill me!'"

She found most of her experiences rather impersonal and coped by remaining task-oriented. "The whole diagnosis, the procedures, they are just steps. I'm calling, making appointments, getting things scheduled and done. But for the people in my life, it's been very emotional. And that's made it more emotional for me."

Within six weeks, Kerie underwent four surgeries including a double mastectomy. It halted her work as a physical therapist assistant, any physical labor to include the most routine of household chores, and she was forced to stop one of her favorite activities, cycling. She is now in the process of twenty weeks of chemotherapy.

In the midst of the surgeries, procedures, and doctor's appointments, Kerie was introduced to a program called Beads of Courage. "I was shown the bead room at Dr. Howard's office. I thought, 'Well, ok, that's kind of cute.' They were pretty, but it was beads. I didn't think much more about it."

The Beads of Courage program came to life in Arizona as an arts-in-medicine care program for children coping with serious illness.

"The nurse who started the program explains that when kids go through things, they like to have a souvenir or some badge of courage," says Kerie. "The nurses would give them stickers, but stickers don't last. Some of the kids had so many procedures, and if they'd had all their stickers, they would have been able to better tell their story. So the founder came up with a way for them to keep something tangible and tell their story." 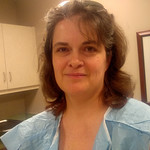 Beads of Courage quickly spread with some children amassing strands of beads that were often too heavy for them to even carry. For many years, it remained a children's program. When it was decided to expand the beads to adults, the Lourdes Women's Center in Paducah took on the task of piloting the program for women being treated for breast cancer.

Kerie scheduled an appointment to get started, taking her support team along with her. "Different beads represent different things, and I have a special bead for each of my closest supporters. Every blue bead represents a doctor's visit. The black ones are pokes and sticks. There are lots of black ones. The beige ones are biopsies. The aqua ones are drains. The rainbow beads are for therapy. There's a bead for everything. I even have a special bead that was commissioned by Dr. Howard's office. That represents him. And I got one to show I got my diagnosis on April Fool's Day. But my favorites are the ones that represent the people in my life."

In no time, Kerie had amassed a long string of beads, each with a different story that she easily recalls. She keeps them in chronological order with month dividers. Kerie also has special beads that represent particularly difficult days.

"The bumpy beads are beads of courage," she says. "Each represents an act of courage. I have one for the day I was really hit hard with the fact that I wasn't going to have nipples any more. I realized how life-altering this cancer is. I spent all day on the couch crying."

Kerie tears up as she reaches one of her earliest courage beads. "That one is from when I told my girls I have cancer. That was a hard day. Seeing my non-emotional fifteen year old break down in tears was hard."

Other beads represent major life events. One of her favorites is a baseball bead that signifies the very first baseball game she ever attended. "I still had the compression bra on with all the dressings from the double mastectomy, and I was sitting in the sun with sweat just dripping. But I had so much fun!"

The beads remain a way to tell the story of her journey to others as well as herself. They put into sight and feel how much a person facing breast cancer deals with and how life-altering the diagnosis and treatment are. "When people ask me what I've been through, I pull out my beads. It shows the story, and sometimes I even forget all that has happened until the beads remind me. It really is a tangible way to show that. And when I go to the office to get my beads, I can share and vent with the nurse navigator. That helps a lot." 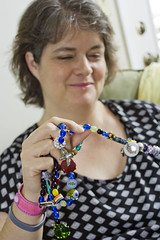 Her strand of beads is far from complete, but she looks forward to the day she puts on one very special bead. "When it's over I'll get a completion bead. Then, after that, I get a bead for every year that I'm cancer free. It will continue for the rest of my life.

"For me, it's more than just memories. Each bead of courage represents a milestone in my breast cancer treatment. It's therapeutic for me to be able to look at each bead and see how far I've come in my journey to beat cancer."