Big Times at the Big E 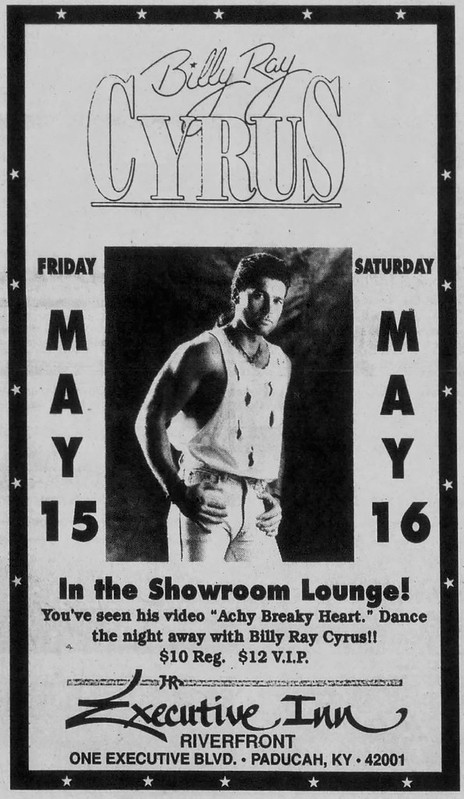 When Yvonne Holsapple took over as manager of Executive Inn Paducah, she also assumed the role of booking musicians to play the Showroom Lounge. The performance venue, which held about 1300, had been patterned after the showrooms in Las Vegas.

From the beginning, the Showroom was an integral part of the business model. The opening weekend featured Jim Nabors. “Shows were there to help fill up the hotel,” says Yvonne. “On weekends that there no conventions, we’d have shows. And we’d have packages with tickets and rooms. It was interesting. I didn’t get a lot of instruction on what to do. The previous owners went through a middleman in Nashville. I don’t think they even told him who they wanted to have here. He just booked who he thought he could get. When we took over, I would tell him who we wanted. Eventually, I started booking directly with the talent agencies.”

For someone with no experience, Yvonne quickly became a pro, learning what worked in Paducah, identifying up and coming stars, and getting accustomed to fulfilling riders (a list of an artist’s requirements during their visit). “We had all kinds of requests,” she says. “The first month I was there, a big artist came in, and he was used to being furnished with ladies after the show. I was stunned. I thought if all entertainers are going to be like that, I couldn’t do it. But he was the only one who ever asked. I just told him we couldn’t provide that.”

Yvonne discovered immediately that country music was the biggest draw. Once a year, she would attend a conference in Nashville that showcased up-and-coming artists. “I’d book artists from there. And I listened to people and the radio. So you could get musicians as they were rising up. That’s how I got Reba McEntire. She was just the absolute sweetest lady. She was here after she was a big hit, but I had booked her before. I would also get acts who were passing through and could use another night somewhere. That’s what happened with The Judds. It was on a Sunday night. I filled up the hotel and made money on the show.”

The most unique story to come out of the Executive Inn Showroom is that of Billy Ray Cyrus. “He was a miracle,” says Yvonne. “His father was a state representative in Frankfort. Every fall, there was a labor conference at Kentucky Dam Village. He was friends with a girl who worked for me. He called her and said, ‘My son is in a band. If you can put him in the Silver Saddle (the bar adjacent to the Showroom), I’ll make sure all the representatives come down one night and give you a bunch of business. I’ll never forget the first time I saw Billy Ray. We booked him into the Time Out Lounge at the Silver Saddle, and he really did well. We would then book him every month for two or three weeks per month. He even lived in one of the suites off and on when he was there. That went for about 8 to 9 months. And people loved him. It would be standing room only, and he pretty much became the house band. He got a record deal during that time and came out with Achy Breaky Heart. We had him booked in the Silver Saddle, and he got so big that I had put him in the Showroom. He was so excited. He was such a good kid. When he was in the Silver Saddle, he’d told me that his goal was to one day play in the Showroom.”

In addition to up-and-comers, the Showroom booked established stars—artists such Little Richard, Tanya Tucker, Willie Nelson, Vince Gill, Fats Domino, Chubby Checker, George Jones, The Temptations, Wayne Newton, Commodores, Hank Willams, Jr., and even Bob Hope. Frankie Valli and The Four Seasons practiced in the Showroom for a week before starting a Las Vegas residency. Yvonne booked an outdoor show with The Beach Boys, which, she says, is one of her favorite concert memories from the Executive Inn. “And Willie Nelson was just a great guy,” says Yvonne. “I always had friends who wanted to meet some of the artists, and he’d say, ‘Yeah, just come on back the to bus.’ Everyone loved that. I just really liked him.”

Yvonne loves to hear about the cherished memories many have of attending shows. The long list of celebrities who performed at the Executive Inn represents a catalog of happy remembrances. “It was a true Showroom,” she says. “There were tables and booths. It was a different kind of experience. You took take your best friends, watch the show and drink, and interact with one another. It was exciting, and it was a good time.”

Finding a Home in History