The landscape around Fountain Avenue was largely undeveloped countryside in 1908. The Paducah trolley made its last stop nearby before heading back into town. A scant number of new homes dotted the area. And on an early spring day, the cornerstone was set for a new church building. Despite it's location, nearly 3,000 people witnessed the event.

During the years following, Fountain Avenue United Methodist became a cornerstone of its own. Many residents found a commonality there as the Fountain Avenue neighborhood grew, and the once country area was transformed into part of the city.

Nearly a century later, the church, while still a part of the neighborhood landscape, felt itself increasingly disconnected. "The neighborhood had really started to disintegrate," says Gregory Waldrop, the church's current pastor. "Residents were increasingly transient, and some of the long-time homeowners were aging in place, unable to take care of their properties. There was also a growing level of distrust and suspicion of one another as those who lived here truly didn't know their neighbors." 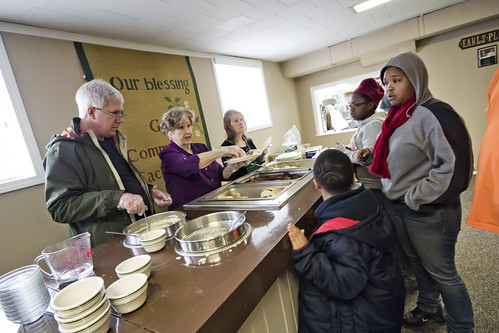 Fountain Avenue UMC found itself at the heart of a growing problem. "The church looked at the gifts that they had and decided to get out there and get to know our neighbors," Waldrop added.

Twelve years ago, the church hosted the first neighborhood fair. "It was a successful way to reconnect," adds Waldrop, "and the church quickly learned that this is exactly where its gifts are. Instead of coming away tired, it energized this church."

Two years later, Fountain Avenue UMC hosted its first community breakfast. "What an amazing way to connect to neighbors. There's nothing like gathering around the breakfast table. And the first few times, all we could focus on was getting the food out there and having enough to go around. We quickly discovered, however, that our most important work was sitting around the table with these folks. It is a wonderfully diverse group that comes here. Some come for nourishment, some for company, some for warmth, both physically and emotionally, and to be connected. They know they have a place here."

Ten years later, the church hosts eight breakfasts a year with around 300 coming through the line to enjoy eggs, bacon and biscuits. Every fifteen minutes or so, Waldrop offers a few words to the crowd and reminds them to be aware of the important people around them, which is everyone who is gathered at the table of fellowship.

"We've had our firemen, policemen, and local representatives come join us at times. A reservoir of goodwill starts to build, and community is strengthened. In that, we feel like we are doing something that matters eternally," Waldrop said. 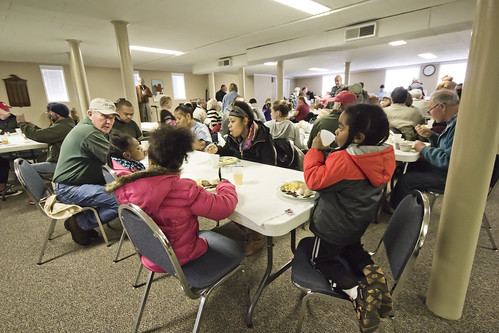 During a recent breakfast, Waldrop was pleasantly surprised to see Diamond and Sky, two twenty-year-old girls who came to the first breakfast when they were ten. "These kinds of connections are so important," he added. "In a world where neighbors can often generate suspicion and hostility, a place of hospitality in the neighborhood where you know you are welcome is needed. It is also a pretty holy undertaking.

"We like to think of it as a religious version of Cheers… a place where we know your name."