Brothers of a Feather Flock Together

It’s easy to tell I am at the right house. At the end of the driveway, leaning against the garage, is a row of freshly cut Fraser firs. They stand like a succession of toy soldiers, guardians of the holiday season. As I exit my car and approach, I hear a radio in the garage relaying the beginning of a familiar Christmas tune. Then comes the booming voice of Corey Williams—“It’s beginning to look a lot like Christmas, everywhere you goooo!”

From inside, Corey looks up to one of the garage door windows, setting his eyes to a small space between two of the trees. He spies me coming down the driveway. He runs up and knocks on the window to get my attention. “Dude, you’re here!” he says. “Come around to the side door.” He turns from the window and continues singing. “But the prettiest sight to see, is the holly that will be on your own front door.”

I throw open the door to the garage, and there’s Corey, ankle deep in evergreen. The scent is exhilarating. “Merry Christmas!” he booms. “Man, you got here just in time. I’m finishing up a couple of wreaths. After I’m done, we’ll take those trees to be flocked, and tonight, we’ll make some deliveries. You’re not going to believe what a blast this day is going to be!”

It’s late November. The holiday season is still in its infancy with Thanksgiving being less than a week behind. And if anyone has the right to be sick of the season already with all of its holly jollys and one-horse-open sleighs, it would be Corey. He’s been bombarded with Christmas since August, and ever since the week of Thanksgiving, he’s been in a whirlwind of greenery and lights, hardly finding even a few moments at a time to sleep. Yet here he stands, an embodiment of the Christmas spirit, beaming with all the joys and electricity of the season.

Corey finishes crafting the wreaths, loads the trees into the back of his pickup, and we head to see his brother Len who will cover them in lights, flock them, and get them ready for delivery. 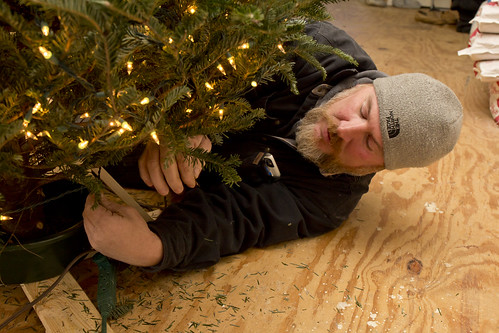 “My dad started this in the 80s,” says Corey as we glide down the interstate. “It was at his nursery in Reidland—Bob Williams Nursery. Len and I were helping early on. We were cheap labor, I suppose, being his sons. Some of the folks would come out to the nursery to get a Christmas tree, and all they’d be in was a car. They would pick a big tree and really have no way to get it home. So dad would say, ‘Well, take my truck.’ Then, they’d need help getting it in the house. So that’s where Len and I came in. Before long, it turned into a delivery service.”

Getting a Williams tree delivered to one’s home became such a tradition for so many families that the brothers continued the Christmas tree business beyond the death of their father and the closing of the nursery. Each May, the brothers head to the mountains of North Carolina to make a selection of Fraser firs, the Cadillac of Christmas they say. Corey and Len select and tag the trees that will eventually stand in a place of honor in their customers’ homes.

“We get quality trees and are picky about our work,” says Corey. “When I was five, I remember watching dad flocking trees and listening to him talk about what he looked for. We learned quality from our father. No matter what he did, even if he wasn’t making much money off it, was complete quality. If it wasn’t, he wouldn’t do it. We’re absolute perfectionists.”

As we head to see Len, Corey’s phone continuously dings as people from across the area send him messages. “Those are orders coming in and folks confirming delivery times,” he says. “I started to hear from people back in the summer; but once you reach this time of the year, it’s nearly nonstop.”

We eventually make our way to southern Livingston County. After some winding country roads and a trip down a gravel lane, we arrive at “the farm.” We step out of the truck, and from a nearby barn, I hear a voice harmonizing with Frank Sinatra. The sweeping orchestral arrangement glides across the chilly air. “Have yourself a merry little Christmas, let your heart be light. From now on, our troubles will be out of sight.” We enter the rustic wood building to find Corey’s brother Len singing and meticulously placing strands of lights around a tree.

“You’re just in time to see some of the magic!” says Len. “We put lights on 90% of the trees. And then we flock them. When we do that, it covers the cords and makes the lights subtle. It looks very natural. They just glow.” 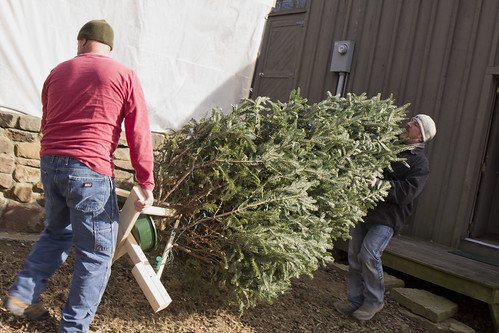 Len and Corey finish off the lights and take the tree out to a tented spot just outside the building. Len steps into a jumpsuit, dons a facemask, and sets to flocking the tree as it spins on a mechanized platform. Once complete, they carry the tree to a sunny spot where it dries. After a group of trees are complete, Corey checks his calendar to see who will be expecting a delivery. Many of the days are so full, it would be impossible to squeeze in another name to the calendar’s squares. They divide the names, and I take off with Len and his son to make the first delivery.

We make our way to Patricia Shekell’s house. By now, it’s dark. Her porch glows from the strands of lights strung around the perimeter of her home. She’s been a customer for many years and couldn’t imagine a holiday season without a Williams tree. Len and his son bring the tree in, unwrap it, and Len gets down on the floor to find the plug-in for the lights. Standing nearby are Patricia’s two grandchildren. They stare at the tree in anticipation. Len plugs the tree in, and instantly, the room alights with a warming glow. The children take a sharp intake of breath as, for a moment, they are held motionless. Smiles spread across their faces.

Len’s eyes grow a bit damp. As we leave, he explains his emotion. “It’s the one time of year when we feel like Santa Claus,” he says. “When you take that tree in where the family is gathered, set it up right where they want it, and plug it in, you get those oohs and ahhs. It’s an amazing feeling. I often say that if there was anything I’d choose to do without the concern of money, it’d be this. If we won the lottery, we’d spend our holiday seasons giving away Christmas trees.”

About ten minutes after leaving Patricia’s home, my phone rings. It’s Corey. “That was pretty magical, wasn’t it?” he asks. “The tree is just so important. Christmas traditions in the home center around the tree. When the tree comes into the house and it’s on, it starts that Christmas season into motion. And the first place a kid runs on Christmas morning is to that tree. That’s where the family takes all the pictures and all the memories happen. And those memories last a lifetime. We realize that, and it is important to us.” 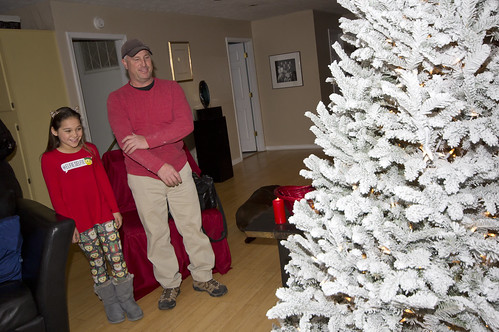 Corey and Len will continue delivering trees for the rest of the night. Tomorrow, they will do it all over again until, as the big day approaches, the orders are fulfilled and the busyness of the season begins to wane. The longest of days can bring upwards of twenty hours of work. After those days pass, they will help the few stragglers and latecomers. Corey’s even been known to give up his own personal tree just because he doesn’t want to see someone else go without. The duo will no doubt be more than tired by the time Christmas Eve rolls around. But in spite of all the hustle and bustle their business brings, you’ll never meet two people with more holiday spirit. It is that special zeal for the season that propels them day in and day out.

“This means the world to us,” says Corey. “We become a part of a family’s Christmas in their home. Not everyone gets to do that. And we’ve watched kids in these families grow up. I remember being under a tree at a family’s house. As I was plugging it in, their little boy who was just a couple of years old climbed up and sat on my back. Now he’s 18! We’ve been a part of many families lives for nearly all of our lives. That’s what Christmas is all about, after all. Family and friends. Because of the trees, we have a huge extended family. That’s something that never goes away.” 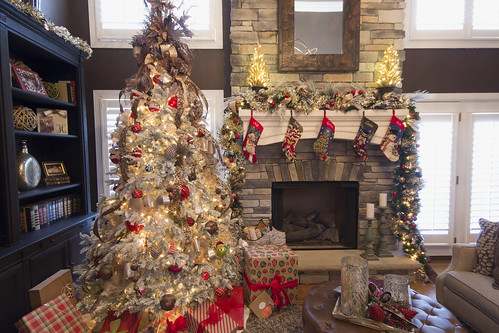 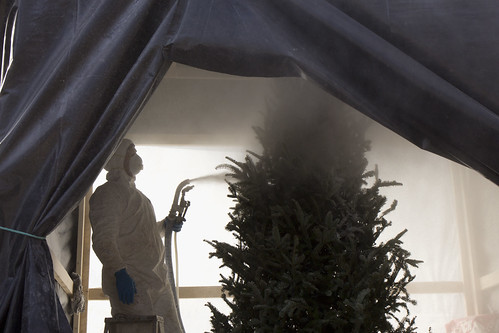 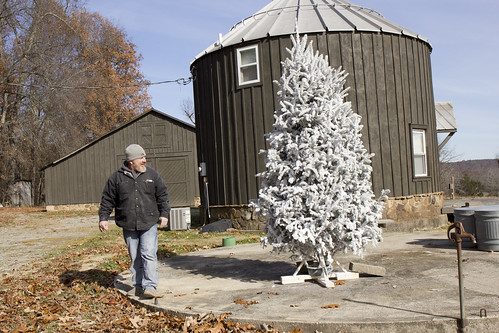 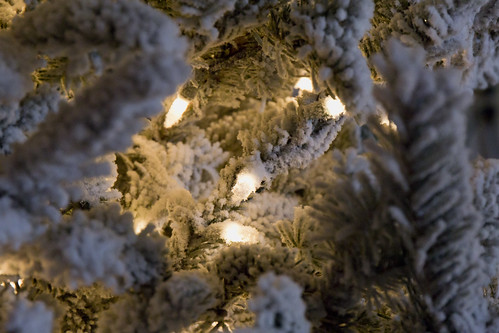