Terri and Chris Myskowski's hearts flowed over with newfound love when they were blessed with the birth of their first child, a daughter. The contented little trio did not know what the future held, nor did it seem to matter.

With the birth of their second daughter, Chris received some good-natured ribbing from friends and family. Chris remembers the often repeated question: "Don't you know how to have a boy?"

Terri and Chris did not know if they'd ever have a boy, let alone any more children. "We never had a number in mind when it came to how many kids we'd have," recalls Chris. "We simply decided to see how many God would bless us with."

The Myskowskis watched God's blessings unfold over the next thirteen years with the successive births of six sons. "Do I know how to have boys?" laughs Chris. "Well, I guess I got it figured out!"

With their first daughter now married and the second engaged, Terri and Chris are now left with a home full of growing boys. Ranging in ages from five to eighteen, they, along with youngest sister Asia, coalesce as a team, forming a large-family relationship that is not as common as it used to be.

There's Isaac (18); Will (16); the twins, Jacob and Jedidiah (14); Nick (11); and little Jackson (5) who goes by Jack and much prefers to talk to dad about pumping up his bicycle tire over being interviewed for a magazine article.

"I don't know that there's much difference after you have the first three," jokes Chris. "Well, except for the groceries. They eat all the time. We go through four gallons of milk every couple of days! I think they try to outdo one another!"

While the boys may not really be competitive eaters, competition is a defining characteristic of the Myskowski boys. "We are all that way," says oldest son Isaac. "And it doesn't matter who it is. I get into competition with all of them, even with Nick who is younger. It can be anything—football, video games, ping pong, who's growing taller—we show no mercy when we try to one-up one another! And dad gets competitive just like us. I like to dunk on him when we play basketball."

"What?" Chris retorts, a confused look spread across his face. "When does that happen? That doesn't happen, really."

"It feels good to beat him," laughs Isaac.

The natural competitiveness becomes an asset when the Myskowskis band together as a team. The older boys have played together as part of the West Kentucky Warriors, our regions homeschool football team with dad Chris as a coach.

"It's easy to coach them," he says. "I know how they will react, what will motivate them, and what situations they'll succeed in. And they have a unique connection and understanding of one another."

The connection on the field is simply a reflection of the way the family approaches life. Chris, who came to Paducah with the Coast Guard before going to work at Marquette Transportation, had to move his family often across the country. Early on, he instilled the need for a strong bong among his children which served them well as they adjusted to life in various cities and towns.

"You have the normal bickering and fighting from time to time," says Chris, "but they have good relationships. I teach them that what they develop now will go on into adulthood. We have to keep short accounts with one another and avoid bitterness. There are lots of apologies, and we realize that we are all human beings."

"You always have someone around, and you never get lonely," adds Isaac. "If someone doesn't want to do something with you, you just move on down the line until you find someone who will. The twins are a package deal. If you get one, you get the other. You won't get just one of them! But we all have a good bond. We can trust one another, and we go to one another for advice." 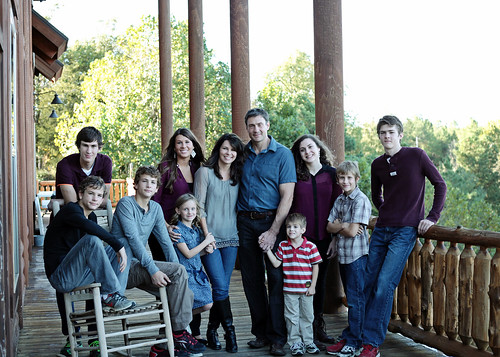 The boys do many of their activities together. It is rare to see one alone, and when it does occur, someone will invariably say, "Wow! Just one Myskowski!"

They help one another with homeschool lessons, and the elder Myskowskis teach the younger ones everything from math to how to accomplish some of life's most basic necessities.

"Everybody helps teach everyone one else," adds Will. "We work together when we do chores. Like when we do the lawn, each of us takes a section, and we get it done as a team."

"It is a great privilege to lead these boys," says Chris, "and it is an incredible responsibility. I'm lucky to have them. And what fathers do is an amazing generational thing. What you do or don't do impacts your children and your children's children. I want to instill important truths in their lives; like a strong work ethic, for example. I teach them that whatever they do, they need to do it with all they can and to be their best. Be reliable and responsible."

Even though finding the time do so with each son can be a challenge, Chris manages to forge a unique relationship with each of his boys. He spends time in the evening imparting the truths of Scripture, and he takes advantage of special opportunities to spend time with each son.

"When we (the twins) turned ten, he took us floating down the Mississippi River for a couple of days," says Jacob.

The boys look to Chris as the leader of the Myskowski ship, and they are already realizing the value of a life infused with the caring love and teaching of a father.

"And he's always there for you," adds Isaac. "In some ways, he's also like my brother. I trust him, and he trusts me. And for him to be there for me when I fall is a blessing. That kind of love motivates and guides us. I can go to him knowing he's been there."

Brother Will agrees. "I can tell him anything. I know he's not going to hold it against me or judge me."

Chris now sees the maturing fruit of being a father as his oldest daughters start life on their own, and his oldest son Isaac looks to the future after completing school. And Chris knows there's still more work to do with those left at home. He sits on the porch, little Jack perched on this lap. There's a bicycle leaning against the garage with a tire in need of some air.