WORLD BOOK NIGHT is April 23. But don’t limit yourself to one night. READ every day and every night! Just READ!

Naturally all of us at PADUCAH LIFE Magazine are avid READERS, and we do everything we can to promote this vital exercise of the mind. In many issues of our bi-monthly publication we feature local authors who are making a contribution to this noble effort.

In our March edition we introduced Gwen Lentz, a late-in-life author who has chronicled her early life in Pollard, KY in her memoir, A Long Way From Pollard. At the insistence of her daughter, Gwen began writing stories of her childhood and, after filling three loose-leaf notebooks, bought a computer and wrote a book. It’s available at lulu.com and amazon.com.

In our January edition we featured the science fiction novel of Stephen Poirier, Calliope 7. The book is part of a trilogy of novels that Poirier plans to write and self publish. Read an excerpt from Calliope 7 below. The novel is available at amazon.com.

Berry Craig, noted local historian and journalist, has a new book coming out this fall entitled Kentucky Confederates: Secession, Civil War, and the Jackson Purchase. This will be Craig’s fifth book. It will be published by University Press of Kentucky. Craig taught history at WKCTC for 24 years before retiring last May.

Retta Folsom, beloved behind-the-scenes persona of the McCracken County Library’s Bob Dog, has authored yet another wonderful book for children about the composer Ludwig van Beethoven. It is literally an “ode to joy” and is a wonderful introduction for young readers to both the joy of reading and the joy of classical music. It is available at the Paducah Symphony Office at 2101 Broadway.

Rick Algood, the author of The Christmas Angel (the fourth book in his angel series) continues his inspirational stories about an unusual Mississippi family and its descendants. His latest book was inspired by a former foster child who now advocates for children and young adults. Rick’s books are available at BeBe’s Artisan Market and through Algood Publishing, Inc., P.O. Box 322, West Paducah, KY 42086.

Look for these authors and many others contributing to our local literary scene! 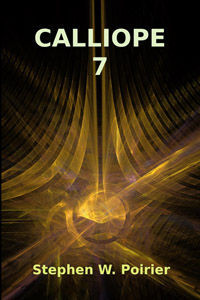 Stephen Poirier provides readers a glimpse into his futuristic novel

Calliope stepped away from the display, wrapped his cloak around himself and dropped into the pilot chair. There had to be a way to make this work, he thought, there always is. It simply eludes me. I just need to clear my head and wait for inspiration. After all, the spirits that protected this world would surely want to help avert the deaths of millions of people. He shook the thought away. “I can't think here. Turbine status.”

The voice of the ship, smooth and feminine, answered him. "Turbines one through three are online, lightly loaded."

“Fine, I need some space between me and Earth for a bit. Spin turbine four.”

“Yes, I'm fine, just seriously tired. Well, more like mind fried I suppose. I need a cup of tea and some rest in a very quiet place. Go ahead and take us there.” Moments later, the status lamp turned a pleasant blue. It seemed to nicely match the upper atmosphere of the earth just visible at the edge of the panoramic window in front of him. Turbine three reports that four is online within nominal parameters. Leaving orbit for deep space. Calliope didn't hear this last report, he was already asleep. Behind him, a small figure stirred and slowly approached. The girl, in all appearances a child, stared at the sleeping man. Her eyes scanned over him analytically. Ultimately, she wrinkled her nose and sighed. “I don't get the dream thing. Sure, the human brain needs to wind down and deal with stray noise gathered from daily thoughts. But that only goes so far. It would seem that some dreams actually involve things that have nothing to do with the day.”

“So that means the brain is creating more thoughts during this time. That seems rather counter-productive doesn't it?” There are several possibilities here. First, the brain might come up with interesting things as an inducement to sleep long enough. Sort of a survival technique. Second, the actual interaction of the brain's thoughts of the day with historical memories might trigger patterns that are interpreted as something new. Think of it as wave interference patterns. Lastly, of course, these dreams might be stimulated by something external to the brain.