It was a simple act of kindness—one moment of outreach that changed Paducah Police Officer Gretchen Morgan's life forever.

"When I was four, I was bit by a dog," she says. "I had to go to the hospital and get stitches. There was a police officer there who played peekaboo with me from behind a curtain. From that point on, I had an interest in law enforcement. "

Now, thirteen years after joining the Paducah Police Department, she's dedicated to reaching out to the community she serves, always on the lookout for a person whose life could be changed by the simple act of a local law enforcement officer.

Two years ago, the department created the position of Community Resource Officer in an effort to better connect with the city they serve. Gretchen stepped up to be the first to fill the role.

"I spent eleven years on patrol," she says. "As my career evolved, I did more with the community. I was at community events, I was at the schools, and I became a D.A.R.E. instructor. But we didn't have a specific person to call and ask to come talk to a group or come to a community event. Chief Barnhill realized we needed that liaison between us and the community."

The department also saw the opportunity to join together with communities to be proactive about potential issues. "We have to educate about problems we are seeing, things that are going on," says Gretchen. "I just did a presentation in the Ballard County Schools, for example, on the dangers of social media. Kids can get in trouble over behaviors on social media, so now we're pushing out to educate."

With Gretchen in place as community liaison, the department always has an open ear. And Gretchen is listening to meet needs. "I had a senior citizens group who wanted to learn about general safety tips. I hadn't really thought about that. So I developed a program. I have a bullying a program and a distracted driver program. If someone in the community calls and has identified a problem or need, and I don't have something developed, I'll sit down with people in the department, and we'll develop something to meet that need. It's our job to educate, not just police from the patrol car." 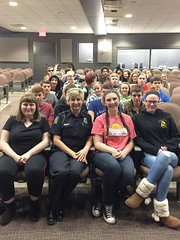 Gretchen also listens and communicates with the community through the Paducah Police Department's social media accounts. "People look to social media for information," she says. "We use it to post important information about scams or someone we're looking for. It's helped us solve crimes. We were looking for a suspect not too long ago, and within four hours of posting, we caught him through information we got from social media. But it's also a way to let people see who we are. On Halloween, for example, I posted photos of trick-or-treaters interacting with officers. They may look at an officer different after that and see him or her as a human being, not just a police officer. Sometimes people forget we're people, too. We don't always wear the badge and gun. We go trick-or-treating with our families."

One of the most viral social media posts from last year came from an idea an officer had for Chief Barnhill. "We went to the Noble Park pool," says Gretchen. "There were lots of kids, and they had no idea we were coming. They were asking, 'Why are you guys here?'" The officers started a cannonball contest, which they judged. "And then we got the kids to start egging the Chief on to jump off the diving board," adds Gretchen. And jump off the diving board he did—in full uniform. The kids were more than delighted as were scores of people who saw images of a soaked Chief online.

Gretchen's work culminates in efforts that are pushed out through every officer in the department. "It's easy to stay inside your cruiser and do your job and answer your calls and work your area," she says. "But we need to get out there and know our people. Recently, my second shift guys took it upon themselves to go to Elmwood Court and do a huge cookout. That was all them. I was like, 'Aaah! It's working!' I try to remind them to get out, go walk through the neighborhoods, and talk to people. And we're moving in the right direction." 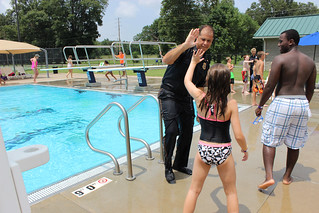 The efforts of outreach have increased lines of communication between the Paducah Police Department and Paducah's neighborhoods. It has proved valuable in fostering an ongoing relationship to jointly improve our city. When times are tough for citizens or police officers, support is in place for service to reach forward in either direction. And, perhaps years from now, new officers will come on board and say it all started with a simple act of a Paducah Police Officer.