Paducahan Cory Roof isn't completely accustomed to his newfound notoriety and fame. But he's gleefully learning to adjust. The 27 year-old lived a mostly quiet life out of the public eye; that is until he embarked on a mission and became well-known for a single activity: eating.

As a Paducah food critic, Cory makes his rounds to local restaurants, offering up unfiltered reactions to some of our area's best creations. "I've gotten autograph requests!" laughs Cory. "Restaurants may find out in advance that I'm coming, and I often get a free meal out of it, too. I don't complain."

We first encountered Cory at a local establishment. Patrons whispered among themselves as he enjoyed a burger. "That's the food critic guy," one man murmured. "I wonder what he's going to say about it," another remarked. Cory simply munched away, deflecting the pressure of the critic with another bite of the food he loves.

You won't find Cory reviewing five-star restaurants, either. He is an everyman, sampling the culinary goods of everyday eateries. "If I see or hear of something that I think would be good, I'll give it a try and review it. I get a lot of requests, too." 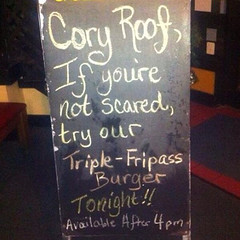 He was once called out publicly by Gold Rush Cafe to try their Triple-Fripass Burger. "It was huge!" he says. "I gave it a great review, but it was like a meal for a whole family. I sometimes need to think ahead and go with a group so I can demolish it that way."

From new sandwiches at chains like McDonald's and Arby's to local hotspots like Bob's Drive-In and Dairyette and even booths at Barbecue on the River, Cory's reviews are simple. "I do have a rough five-point system" he says. "Tops is pretty-awesome, four star would be pretty-good, and three would be just ok. I don't know what the bottom two would be called. I haven't had any of those yet!"

If you are a follower of Cory on Instagram (cory_roof), you are probably familiar with his rating system with the hashtags #prettyawesome and #prettygood. Instagram is where Cory first started publishing his opinions.

"Really, I was just kind of bored," he recalls. "I watched some reviews by a critic on Youtube, and I thought that if he could do it, I could too! I did it on Instagram, and then I started on Youtube."

We accompany Cory on his first review of Marco's pizza. He scans the menu board, eager with anticipation. "Ooooh. Take a look at that BBQ chicken pizza. Does that sound awesome or what?"

Upon receiving his order, Cory quickly whisks his aromatic treasure home to his basement studio to capture his first response for the awaiting throngs of hungry fans. He opens the box like a child with the first gift of Christmas. "Whoa!" he exclaims. The solitary word says it all. "I gotta get a picture of this."

Within moments, Cory is in front of the camera, pizza slice in hand and ready to chow down. "We're about to get in it!" he says before claiming his first bite. "Man, that is really good! Oh yeah. It's really tasty. I can really taste the barbecue sauce. I give this one a five out of five. It's pretty awesome!"

With that, the review is complete. Therein is the beauty of Cory's work. Viewers experience that first reaction, the magic moment when the taste buds spring to life and an instant impression is made.

"I do look at food differently" says Cory. "And I know a lot more about all there is to eat around Paducah!"