Day Trippin’ – Out of the Way Day Trips
Add comment

Day Trippin’ – Out of the Way Day Trips

Paducah is the greatest town on earth. Ask anyone. There's no denying that fact.

But even the greatest town on earth can't contain every feature a person desires (i.e. zoo, roller coaster, Indian food). Sometimes you have to travel, and sometimes you wake on a Saturday morning with such an urge to be somewhere else and see something so different that the wanderlust is instantaneous and undeniable.

You require a day trip, a place you can get to by lunchtime, and even return home from on the same day, if you choose.

But where to go?

Might I suggest one consideration for future plans: McMinnville, TN. Located in Warren County, just a 3.5 hour drive from Paducah, McMinnville is home to Cumberland Caverns and the second longest cave in Tennessee.

But why, you may ask, would I travel to Tennessee to visit a cave when we have some mighty impressive caves here in Kentucky that are a tad closer?

That's right, a bluegrass concert in a cave,…333 feet below the surface of the earth! And I can tell you, the experience is just flat out cool (and not just because the cave maintains a constant temperature of 56 degrees).

Imagine yourself walking down a narrow, dimly lit path, surrounded on all sides by sheer rock and the sound of dripping water, when all of a sudden the path opens up into the Caverns' massive Volcano Room, capable of seating hundreds and boasting ethereal pink and purple lighting, a chandelier, and the best acoustics anyone can imagine.

The Volcano Room contains bathrooms, and even a concession stand, though the hot dogs were a little lackluster and alcohol is a no-no, presumably with the liability of being in a cave. The hike down is hardly strenuous, and the temperature is certainly bearable, if not downright pleasant.

The standard amenities are certainly present which makes the venue's non-standard amenities—the sound, the natural beauty, the intimacy of the surroundings—seem even more special, making the whole experience almost other-worldly.

Not to mention that the trip is quite affordable. The Volcano Room boasts some big names and a PBS series which costs more to attend, but for its regular concerts, which are held about once a month, general admission is only $20.

In a day's time, for twenty bucks and a tank of gas, you can attend a bluegrass concert like none you've ever seen before.

My travel companions and I drove to McMinnville blindly, on a rumor and a hope that we would have a great adventure. We weren't even familiar with the day's performers. But after hearing the brilliant music of Ashleigh Caudill and Missy Raines in the setting of an underground room, we became instant fans, of both the musicians and of Cumberland Caverns.

Adventure achieved, and likely I'll be going back.

Which reminds me…Bradford Lee Folk and the Bluegrass Playboys will be in the cave in April. 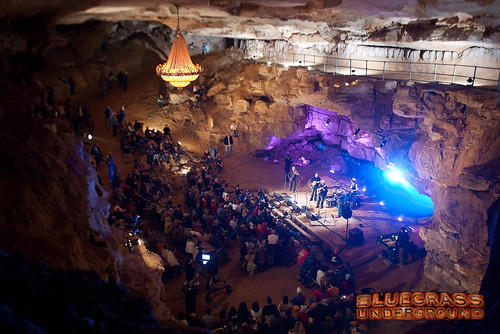