Dough for Dough: The Donut Hole is No Half-Baked Idea
Add comment

Dough for Dough: The Donut Hole is No Half-Baked Idea

Some teenagers think of nothing but coasting through life with the help of someone else. Others crash on the couch and play video games for an unpredictable amount of time.  But some have that mature ingenuity, the type (normally) fashioned from hard work and old-fashioned experience, and put it to good use.

Kenny Poloski of Bandana is one such young man.  At the ripe old age of 18 he decided to open and operate his very own business—Kenny’s Donut Hole—located at 3561 Metropolis Lake Road in West Paducah.  His idea for a donut shop came last August when Kenny sat in class as a senior at Ballard Memorial High School.  While his friends discussed trucks and shotguns, Kenny’s mind focused on donuts—and the possibilities of profit.  This past APril, still a month from graduating, his thoughts and planning came to fruition with the opening of Kenny’s Donut Hole.

The idea to make donuts came from a group of Amish contractors recently hired to build the home of Kenny’s parents, Junior and Crystal Poloski.  The family discovered the time-honored culinary traditions of the Amish culture, most notably their complex system of pastries and baking techniques.  Kenny noticed the donuts.  He later synthesized the methods of the Amish with his palate’s preferences, creating what gastronomes call a fusion.  His style became his own, and he now prepares and serves his creation with the heart of a pastry chef. 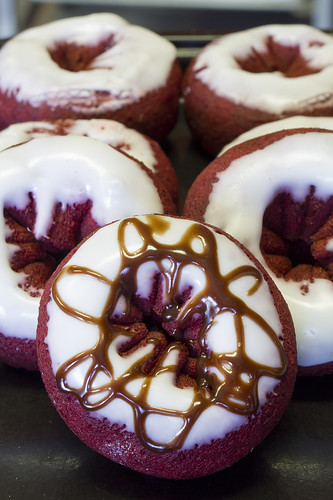 One will not find ordinary donuts at Kenny’s.  If you favor the traditional, grease-soaked variety, then look elsewhere—he doesn’t have them.  You’ll find baked—not deep-fried—ones at Kenny’s, a technique that not only produces a delicious donut, but also a healthier one.  “I wanted to stay on par with the health community,” Kenny explains, “and serve a product that folks could really enjoy eating.” And Kenny sells more than plain old donuts:  apple turnovers and freshly baked bagels can be found there every morning.  He also hopes to soon experiment with cakes and various pastries.  When I ask him what customers like most so far, he answers, “The red velvet donut and original glazed have a hard time staying on the shelf.”  After tasting his baked red velvet variety, I can understand why.  ‘Delicious’ just fails to describe the delectable little wonder.

And like most people involved in food, Kenny loves people, and understands the importance of taste in creating lasting human relationships.  “Food is the one thing that makes all people happy,” he tells me, “and everyone deserves a good treat.”

Kenny’s Donut Hole opens at 5 am every morning, seven days a week—just about the time he finishes glazing the day’s first batch.  When does he close shop?  Logically, he answers, “Whenever I run out of donuts.”