“I give props to anyone who doesn’t consider themselves creative but attempts to create anyway,” says former costume designer Alex Scibetta Quigley who looks more the part of a glamorous leading lady than the seamstress working magic behind the scenes.

The petite brunette radiates a positive energy capable of igniting a creative spark in even the most unimaginative. Educated at the prestigious Kansas City Institute of Art where Walt Disney took Saturday morning drawing lessons as a child, she received her Bachelor of Fine Arts degree with an emphasis in fibers. Alex’s original interest in pursuing higher learning in the 2D art of illustration took on another dimension as she explored fiber art. She delved into weaving and papermaking. Although she knew very little about sewing, her experimental art began to take the form of sculpture that hinted at clothing.

The world, or St. Louis at least, was to be her stage when the newly wedded fabric artist moved to St. Louis with her high school sweetheart turned husband, Nick. With over 40 professional theater companies in St. Louis, the area proved to be fertile ground for a young lady interested in exploring avenues for her skills.

So from interest and inquiries, a costume designer emerged. Still with limited sewing experience and much required of her, Alex had to learn quickly and says it was really fun.

To a trained, artistic eye such as Alex’s, clothes are basically a three dimensional puzzle that have to be functional with costumes often requiring more serviceability, especially those for musical productions with strenuous dance routines.

Dress rehearsals are critical because a designer never knows how a costume will hold up until worn on stage. This was a lesson taken to heart by Alex in a dress rehearsal for “Taming of the Shrew,” when the shrew lost her skirt in a wild display of anger and finished the scene in her petticoat. On opening night when the lights dimmed and the curtains opened, one could be assured the shrew’s skirt was sufficiently reinforced to stay snuggly about her waist even in the wildest display of anger. 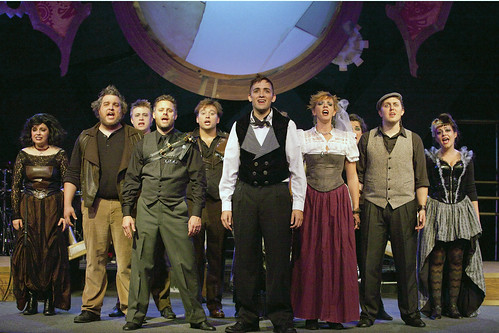 Of the wide variety of productions to her costuming credit, Alex considers the rock opera, “Tommy,” her favorite. Unlike productions where the audience demands accurate portrayals of historic periods like in productions of Shakespeare’s plays or even in modern classics like Disney’s “Beauty and the Beast” where it would be considered a sacrilege if Belle’s dress was any color but blue; a production like “Tommy” lends itself to a healthy dose of creativity. Inventiveness abounded when Alex made numerous trips to the local hardware store to seek PVC and other industrial supplies to adorn costumes influenced by the science fiction sub-genre, steampunk where Victorian era clothing took on a unique modern, industrial twist.

Asked how she dealt with the legendary actor’s ego, Alex said, “The theater community is a tight knit community. 99% of actors and actresses are pretty great people. Besides, in theater there is an old saying, ‘Never make the seamstress mad!’ ”

Life in St. Louis was grand for Alex and Nick. Then came a career opportunity for Nick requiring relocation to Paducah.

Friends, family, and colleagues had never heard of Paducah. They didn’t know how to pronounce it and certainly didn’t know why anyone would want to leave a thriving, vibrant theater community and a beautiful old home in downtown St. Louis to move to such a place. What were those Quigley’s thinking?

Alex says without hesitation, “It was a huge culture shock but a welcome one and a really nice change. The people are friendlier and have a different mentality. We made a great group of friends soon after we moved here.”

Alex appreciates Paducah’s music scene and great arts community with its galleries and talented artists. She was becoming burned out on theater and feels the move was a wake-up call to take pencils and brushes in hand and start painting and sketching again. Her goal is to have a gallery show someday.

As for St. Louis friends and family who have visited Paducah, they can be counted among the believers that Paducah is a great place to live. No doubt St. Louis offers more options of activities and entertainment but the choices can be overwhelming. Paducah gets credit for offering great amenities with small city charm and none of the big city hassles. Just maybe Alex and Nick have happened upon a city sweet spot.

Alex’s creative energy and positive attitude are infectious and her philosophy on relocating is simple, “If you go into it with the mindset that there are things to do, I will guarantee you will meet cool people and have a good time!” It worked for Alex and Nick!

Alexandra can be reached at alexandra@alexandrascibetta.com.

Photo from the musical Tommy by John Lamb.