In a small workshop filled with tree limbs, Justin Roberts bends, hammers and pieces together chairs made from willow wood. He has been fascinated with willow furniture since his childhood, but little did he know that George Beard, the man whose willow furniture shop he often passed, would one day be teaching him the trade. 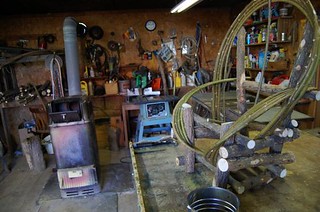 “I remember whenever I was kid, driving by 94 because I’m from Murray, and I would always see his stuff on the side of the road,” he says. “And I never put two and two together until later on down the line.”

Since then, Beard has moved his shop, and it took two years for Roberts as an adult to find the master craftsman. After one four hour conversation and several months time, Roberts decided to move into Beard’s home with his wife and young daughter and learn the trade full time as an apprentice.

“They were skeptical at first,” he says. “But once I got out here, you know, started doing it, they became quite some supporters. We’re very, very happy.”

But the apprentice relationship hasn’t been helpful for just Roberts. 84-year-old Beard sits in a worn leather recliner in his living room recovering from quadruple bypass surgery.He’s thankful to have the Roberts family around to help him with housework and cooking.

“The kids, I can’t say enough for them. They’ve helped me an awful lot,” he says. “My wife passed away three years ago this past October. It’s been pretty tough here but with their help I’ve been making it fine, feeling good.”

It’s easy to see that the two men are more than just master and apprentice. Before going out to the workshop, Roberts checks with Beard to see if he needs anything. Beard says no just that he needs to rest.

Out in Beard’s backyard workshop, Roberts is learning how to make willow furniture much the same way that his teacher did. They both admired the chairs as children, then as an adult sought out a friend to teach them how to build the pieces. For Roberts, his inspiration unknowingly was Beard’s old shop that sat on Highway 94. But Beard’s inspiration came walking up to his house. As a young boy during the Depression Beard saw a group of gypsies carrying willow furniture on his street, which made him call out to his mother.

“They got furniture on their head,” he says. “I remember that just like it was yesterday.”

When the gypsies passed his house the second time they stopped and Beard, along with his mother and father, looked at the furniture. 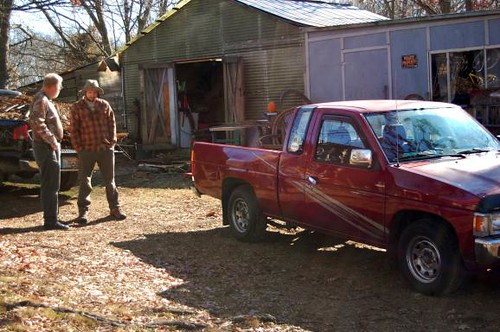 He couldn’t help but tug on his mother’s apron and beg her to purchase the piece. After some negotiating, Beard’s father bought all the items the gypsies were carrying including the child-size chair for only $15. Gypsies carrying willow furniture were actually quite normal during that era. Many people in Appalachia also passed these skills down through their families. Some like Beard and Roberts relied on friends to teach them their skills. Beard learned the basics in just a week after he finished serving in the military in 1960 from a friend in Arkansas.

“He showed me how to cut it, where to look for it and all,” he says. “We got what we needed, went back and he finished it up. And I thought it was the most beautiful thing I’d ever seen.”

There aren’t many willow furniture makers, but Beard modestly credits himself with the craft’s reemergence.

“I think I more or less reintroduced it. I always felt that way,” he says. “Maybe a couple years after I started building it, it started popping up here and there, different places, magazines and whatever.”

One of his pieces has even made it to the Smithsonian. Museum curators came down in the late 1970s and picked out a chair from the items Beard had in his shop.

Many might think the labor of making a chair would be most toiling part of the job. But the toughest part is often finding the willow wood for the pieces. Roberts says about half of his and Beard’s time is spent finding the wood. They actually don’t use wood from the most popular willow tree, the weeping willow. They harvest wood from plants that look more like shrubs. In the 11 months since he has been working with Beard, Roberts has found two farmers who will allow him to plant willow on their land. But until then, the two furniture makers have to search for material the old-fashioned way – foraging.

“We get a lot of it on the highways out on the secondary roads where there’s not a lot of traffic,” he says. “We find it a lot of times in ditches, and the highway department, they’re generally happy for you to cut it off. It’ll save them the trouble. And then we get it around farms.”

Making willow furniture is a sustainable practice because the wood grows back quickly when it’s cut. Roberts says he could easily harvest twice in one year from the same spot. Before becoming Beard’s apprentice, Roberts was a cook and was even accepted into the Culinary Arts Institute where iron chefs train. He hopes to eventually blend his two career paths together and create a sustainable tourist spot where people could come eat a meal he grew and cooked while sitting in a chair he made. Visitors might even be able to take home a little willow souvenir. But until those dreams come to fruition, Roberts will keep bending the pliable branches on his knee to make chairs just like Beard taught him.