For the Love of National Parks
Add comment
Travel

Amelia Beames guided her rented Chevy Malibu down the center of a long dirt road, the dust flying and rising in a swirling cloud behind her. Ten miles from her departure from asphalt, she reached her destination—an old school bus surrounded by cows. The converted bus would be her lodging for the night. The next day, she would see the Grand Canyon. From there, she’d head farther west, up the coast, and across our nation’s northern border. She and friend Hannah Mabry were on a mission to see as many U.S. National Parks and Monuments as they could in a month. Staying in a bus in a cow field would be just one of many fond memories of the trip.

Amelia and Hannah’s goal was to gather photos and information on national parks out west for a new children’s book. It all started with a grant program called Engaged Learning Initiative, which offers students and faculty at Freed-Hardeman University funding for independent projects.

“I’ve always loved national parks,” says Amelia. “I love nature. And just the day before I heard about the grant program, I saw a tweet that gave the best route to see all the national parks out west. So I joked with my friends about getting the funding to do that. I was like yeah, that’ll never happen. But I talked to my photography professor, and he encouraged me to write a proposal. So my friend Hannah and I (not the Hannah who ultimately accompanied Amelia on her trip) proposed we visit 13 parks, take photos, and because she was an education major, write a children’s book about it.” To Amelia’s surprise, her proposal was accepted, and she received funding. “We were floored.”

Before they left, however, Hannah had to drop out. Amelia turned to another friend (also named Hannah) to become her traveling companion. “I asked her what she was doing for the month of June,” laughs Amelia. “I told her she was going to national parks with me.”

The duo flew to their first location and rented a car. “We were gone from June 5 until the 4th of July,” says Amelia. “We went in a giant loop. We’d go to a park and spend a few days and then move on. We stayed in Airbnbs. It was fantastic. And we found out that stuff out west is really far apart. So we spent a lot of time in the car.”

Amelia and Hannah made their way through the southwest before heading up the coast and then back east. “Our last stop was Mount Rushmore. It was a little out of the way. But we did that on the 4th of July.  There was nothing better than that.”

Amelia credits her dad for her love of our national parks. She explains, “He just loves nature. For family vacations, we would do historical tours or go to a national park. So I had already been to Glacier and Yellowstone before my trip.”

In total, they visited 17 national parks and monuments. Amelia and Hannah split the writing duties, pulling from 82 sources. The resulting book, The West U.S.: A Tour of Seventeen National Parks and Monuments, which Amelia compiled and designed, documents their trip. “We divided our research into two parts. We looked at ecological facts of each park as well as their histories. We interviewed a lot of rangers along the way.”

One of the more fascinating parts for Amelia, from a historical standpoint, was Mesa Verde which contains the Ancestral Puebloan cliff dwellings. “We went on several history tours there. And in some parks, we didn’t expect to go so in-depth into culture, but we found a lot of information. That was a bonus.” They also kept a journal of the various wildlife they encountered. For some parks, they could have used more time. “We were at Yellowstone for about a week. That’s just gets the tip of the iceberg. There are some we will go back to.”

Amelia found herself energized by the sense of adventure. Even with a great deal of planning, there were plenty of unknowns and surprises. “It was hard to pack,” says Amelia, who saw everything from deserts to snow. “The first day, I fell in a snow drift that was about five feet high. We were heading down to a frozen lake. The next day, we were hiking through the desert, and it was 80 degrees.”

Documenting her sense of discovery and astonishment provided the fodder for the book. “I want to inspire kids to love the national parks.” Amelia now wants to expand the book’s printing in order to be available for widespread sale. 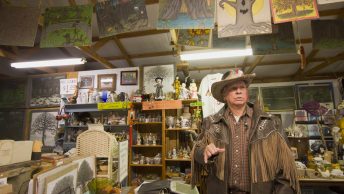