Ginny Hutson sits in a rusty, red, iron chair beneath the soft glow of a flashbulb perched atop a vintage camera. The light falls above her soft brown curls forming a sort of halo around the head of this antique collector and owner of Paducah’s new Frenchtown Station. Given some of the comments from locals we’ve talked to, we’re not the only ones who see Ginny and her husband, Chris, as guardian angels of this “grand little building,” a description the couple have given this 1930s former gas station turned antique shop.

The building was constructed for Three Rivers Oil Corporation at the initiative of its president, local oil “baron” and former Gulf Oil executive Richard Gordon. Several Paducah notables served on the board, including Luther arson. Richard Gordon built some of the earliest gas statsions in the community. The building was designed and constructed by a young Ray Black, who chose the English cottage stye for the Shell gas station at 11th and Jefferson.

“Chris and I have done some research on 1930s filling stations,” explains Ginny. “It was the early days of vehicles in the country and many people were not terribly happy about filling stations popping up in their neighborhoods. So apparently there was an effort by the oil companies to design the stations in a way that more easily assimilated them into residential areas.”

Chris Black, Ray Black’s grandson, and the current president of Ray Black and Son, was the construction adviser for the Frenchtown renovation. He has been both physically and emotionally connected to this legacy project created by his revered grandfather. “It was fun working with Chris and Ginny on this project,” says Black. “They were great partners, researching, restoring, and recreating missing pieces of the station that gave it new life.”

Ginny Hutson has had her eye on this quaint little building for quite some time. “A few years ago I actually stopped and peeped in the windows,” Ginny admits. “And despite the condition of the interior, I thought to myself, ‘One day, when the kids are grown, I just might think about putting an antique store here.’” That day arrived in July when Ginny opened Frenchtown Station.

This comes as no surprise to the people who know Ginny (or ones who read our PADUCAH LIFE feature on the Hutson home several years go). She has antiquing in her veins. Ginny grew up amid relics and ruins as her parents were the purveyors of Park Antiques in Reidland. “In my opinion,” says Ginny, “my dad was the original American picker. Even at his current age of 86, he could give Frank and Mike a run for their money! My mom was a savvy businesswoman and had a wonderful eye for design. And my sister is honestly one of the finest pickers in the south.”

In addition to acquisitions from their travels, Ginny and Chris look to family, friends, and a growing network of colleagues to locate “finds” that will continually “fill” the station in the days and years to come. “The people we work with know what we like and often identify unique pieces that we want to have in our shop.” Ginny loves antique garden, architectural and industrial pieces, so when these talented treasure hunters locate something that falls into the “Ginny genre,” they come a-calling.

“A shopkeeper friend of mine told me, “If you love what you’re selling, then it will sell,’” Ginny adds. If that’s the case, the two delightfully diminutive rooms at Frenchtown Station will be empty posthaste.

Ginny and Chris met their antique acquisition last summer. When they opened the door to the future Frenchtown Station, the layers of the past were apparent and at once appreciated. “The red and yellow stripes of the Shell station could still be faintly seen at the bottom of the exterior of the building,” Ginny explains. “The ceiling of the service bay had fallen into the room so we could see the beautiful bones of the building on that side. It looked like a little cathedral. So we decided to open up the ceiling of the office as well.”

In the newly-exposed attic, the Hutsons found many remnants of the building’s early life. “There were lots of boxes stored in the attic,” she said. “It would appear that perhaps they moved a lot of paperwork to that level before the flood arrived.” Several whiskey boxes whisked from the long abandoned space are now framed and on display. A page from a crumbling ledger recounts the purchases of members of many old Paducah families. To add to the artful ambience, Ginny found a gas station sign in Boston offering eight gallons of gas for $1. And a perfect accoutrement for the entryway into the bay side of the building is a sign reading Engine Tune-Up.

“One of the things we became most enamored with was our continual ‘discovery’ of bricks,” Ginny commented. “We just kept finding these interesting pieces of the building’s origins. One brick in particular led to some Internet digging, which revealed the Station’s very walls were built from bricks hand made by a Swiss immigrant family in Ohio.

Ginny plans to add in a few local luxuries at Frenchtown Station like some candles, coffee, and soaps from Paducah purveyors. “We love Paducah and we love the people who are working, like us, to add ever more interest to an already interesting place,” said Ginny. “We want to bring everyone along with us.”

We think everyone will be more than happy to come along for the ride. 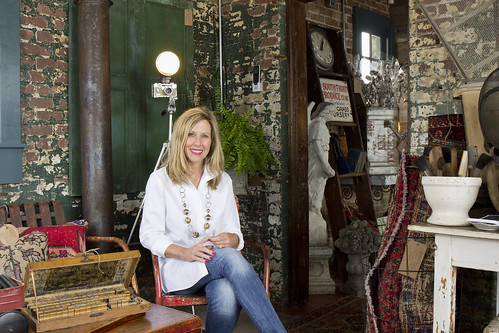 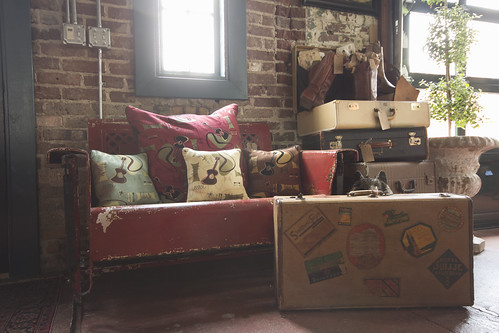 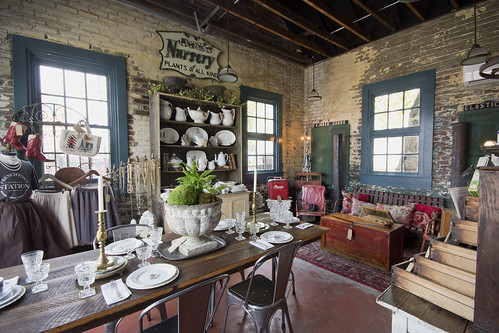 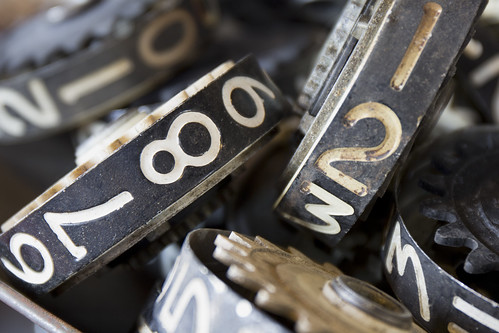 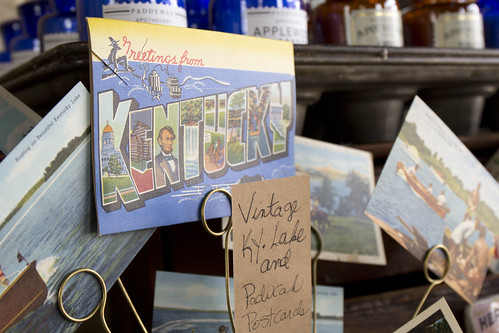 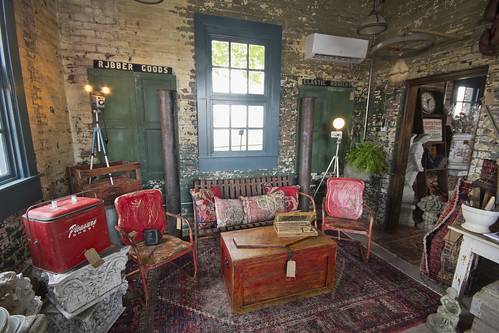