From Eclipse To Quilt To Mural

It’s one of the most iconic quilts to ever grace the annual American Quilter’s Society show in Paducah. Corona 2: Solar Eclipse by Caryl Bryer Fallert took the 1989 Best of Show award and remains one of the most recognizable and well-known quilts in the world. Quilter's Newsletter Magazine named it one of the 100 best quilts of the 20th century, and PBS featured it in their documentary film A Century of Quilts: America in Cloth.

At the time, no one considered the total eclipse that would take place in Paducah 28 years later. Yet the quilt’s theme stood to foreshadow the event that would occur.

When the idea to paint a series of quilt murals on the floodwall adjacent to the Carroll Convention Center came to fruition, there was no doubt that Corona 2 would be included and that it would be ready by the eclipse on August 21.

The idea, born from the mind of Bill Schroeder as he’d look out at the panels on the floodwall from the lobby of the convention center, finally germinated in 2016. “A group got together with Gayle Kaler,” says Char Downs, lead artist for the project, “and decided to do this project—take these nineteen panels that are between the convention center and the new hotel and put award-winning, historical quilts on that wall. They wanted artists from this area that could participate.”

Char was chosen as the lead artist with husband Jay as program manager. Artists who wanted to participate submitted sample paintings that were juried by PSAD Dean, Paul Aho and AQS Executive Show Director, Bonnie Browning. The paintings were segments of the Corona 2 quilt, and the goal was to make them as realistic as possible.

“When Bill had the idea,” says Char, “he didn’t want people to look out and see the hard-edge, flat-painted, barn quilt idea. He wanted them to think there’s really a quilt there.” The style is trompe l'oeil where subjects are painted with realistic detail. “In this particular quilt, there are all hand-dyed colors. So there are no pigments in a bottle. You have to mix and mix and remix to match those colors as close as possible.” 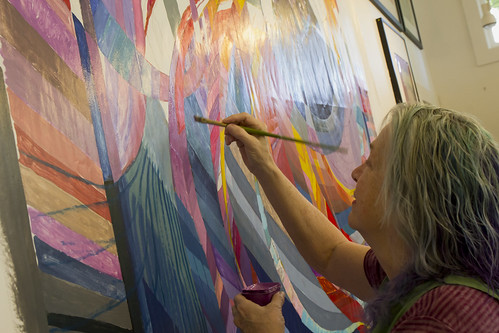 Char is pleased to be the artist behind Corona 2 as it will appear on the flood wall. “I had seen it the first time I went to the National Quilt Museum and was blown away by it,” says Char. “I love this quilt. It’s so unique, and I thought having that as our kick off quilt would get everyone excited. And Carol was excited about it too because of the connection between the eclipse and her quilt. It seemed like it was meant to be.”

Corona 2: Solar Eclipse the mural will be unveiled on August 21, the day of the eclipse. 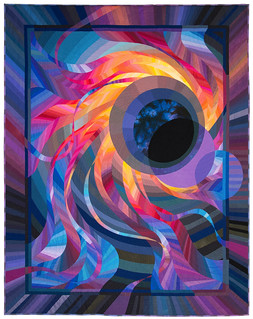 Since the time I was a young child in a grade school science class, I have been fascinated by the dramatic storms on the surface of the sun, which can flair out into the sky for hundreds of miles. The few minutes during a solar eclipse are the time when astronomers are actually able to observe the solar storms in the corona of the sun.

This is my second quilt portraying the solar eclipse (when the moon comes between the earth and the sun, so that the disk of the sun is covered.) The corona is the envelope of ionized gasses, surrounding the chromasphere of the sun, which is visible during a solar eclipse. Corona 2: Solar Eclipse, is more a portrayal of my feelings about the power of the sun than an exact representation of what a scientist might see through a telescope.

I am very excited about the eclipse coming to Paducah this summer. Unfortunately, we will be flying home from Copenhagen that day and will miss the chance to see it. I’ve never seen an eclipse in person, but I was fascinated when I learned about it in school as a young child. I’m wishing everyone in Paducah clear skies that day. Can’t wait to see some of the pictures that will come out of it!