From Foals to Farming

If you’ve watched the steady growth of the Paducah Farmers’ Market over the past decade or so, you have noticed the vendors who have been mainstays for quite some time—the ones who helped build the market into what it is today. One such farmer is Danny Garrett with Garrett Farms. You may have spotted him there, donning his straw hat and worn, denim overalls. He’s a western Kentucky boy through and through. While he’s been around the area for much of his life, his journey to become a local producer provider wound its path around the country and through the middle east before landing him back on Kentucky soil.

“I’ve been raising produce for 15 years,” says Danny. “I row-cropped when I was younger, but for a long while, I got into training horses. That took me away for about twenty years.”

It was during a bit of downtime when Danny row-cropped that he started raising horses. “Bluegrass Downs was open, and people were looking for Arabian horses. I was always looking at farm magazines, and I saw an ad in the back for Arabians. I found a guy who had some in Indiana, so I connected with him and got started. I ran a while in Paducah and was successful, so I got my trainer’s license. It eventually got to where I had to quit farming or quit the horses. So I took up with the horses, and it took off. I was the leading trainer 6 years in a row at a track in California. I also ran up in Delaware, down in Texas, and in Florida.”

Eventually, Danny caught the attention of Sheikh Zayed, the then President of the United Arab Emirates. “One of my horses had been there and won a race, and he wanted babies from that stallion. I worked through the Royal Stables in Abu Dhabi. We’d ship horses to England, where they were raised, then back to the Sheikh.” Danny realized that if he was working for the Sheikh, he could do that just as easily from back home as he could anywhere else.

Danny struck a deal and came back home to Fremont, Kentucky, just south of Paducah. “My daughter was about 7 years old, and I didn’t want to drag her all over the place, so we moved it back,” says Danny. “It looked like it was going to work out.” But not long after Danny struck the deal, the Sheikh passed away. “His boys wanted to do something different with the stable property. So here I was, back home with a little bit of land—so I started fooling around with growing produce.”

Danny’s mother had been working for Bennett’s Farms who raised produce. The possibilities piqued Danny’s interest. “Bill Bennet helped me with telling me what I needed to do. I would have liked to have gone back in row-cropping right away, but it was so expensive to get into. With produce, it didn’t take a lot of equipment to do it. My brother had a little bit of property on John Puryear Drive, and we thought that would be a good place for a stand. My wife liked doing it, and we stuck with it. Once we got established, it did pretty good.” 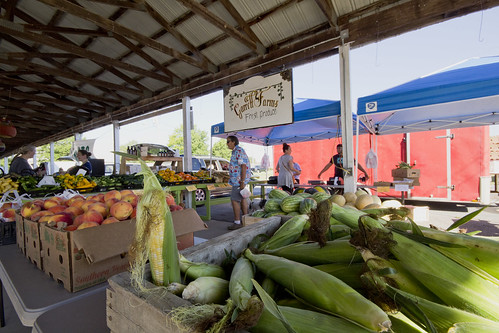 Early on, Danny did hear a few gripes about more and more people getting into the produce business, but he says there’s nothing to complain about. “More and more, people are wanting to eat locally grown food,” he says. “I felt like the more people got into the produce business, the more the public would get interested in buying it. And it has happened that way. It’s really taken off in the past few years.”

On the farm, Danny built some greenhouses in order to get about a month’s head start on the growing season. He also took note of what customers wanted, tweaking his crops according to demand. He also found new markets such as a buyer in Chicago who prefer to get heirloom tomatoes from Danny. “They’re going crazy for those up there,” says Danny. He’s also been taking his goods to produce auctions and various vendors, always looking for new markets.

Produce has caused Danny to be a very busy man. He no longer wrangling horses. He’s wrangling tomatoes, melons, beans, and more. But he loves it just the same. “It’s a good life, and a person can make a living at it if they learn to live pretty plain,” says Danny. “But I do it a lot just because I enjoy it.”