How Much is that Santa in the Window?
Add comment

How Much is that Santa in the Window?

“How Much is that Santa in the Window… The One that Waves Year after Year?”

Beginning in the 1950’s, everyone in Paducah knew the Christmas season was upon them when the cherub-cheeked Santa was in place and waving to passers-by from Hugg the Druggist’s window.

Located at 1903 Bridge Street, the drug store was in business from the 1940s until the mid 1980s, according to Robin Grubbs, who still displays the beautiful Santa in her Paducah home today.
“It was a Rexall store and I was the soda jerk growing up. I mixed water and syrup to make the Coca-Cola. Coke floats and milk shakes were our biggest sellers at the soda fountain inside the store,” she added.
“John Hugg was Hugg the Druggist, and my grandparents, Anna Mae and Cecil Holman, owned the store. My grandmother always put Santa out for Christmas until she closed the store around 1985,” Robin recalled.
Robin said the famous Santa was ordered from Bennett’s Blue Book in Kansas City, MO, and was made by Braymer’s Stuffed Toys. “I remember how he used to sit on a box and wave!” Robin said.
The life-size Santa is in near-perfect condition with a soft white beard and fluffy eyebrows framing a beautifully hand-painted face. His blue eyes twinkle, while his ruby red lips are pursed for a ho-ho-ho! Even his antique black boots appear shiny and new. Sometimes Christmas memories are wrapped in such timeless, beautiful “packages” they can never be thrown away…like Hugg the Druggist’s Santa Claus. 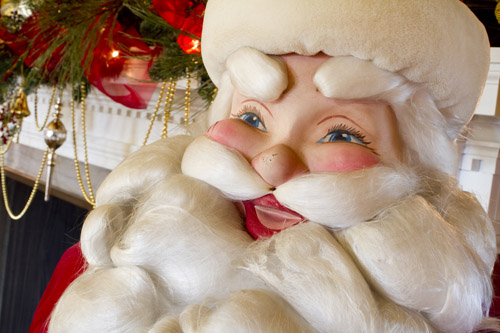