I Didn’t Go To Woodstock In The 60s, So I Decided To Go To Bonnaroo In My 60s.
Add comment

Confessions of a Roo Newbie**

Woodstock 1969 was a four-day music festival on a farm in Bethel, New York that attracted half a million campers and became very political. Bonnaroo 2015 was a four-day music and arts festival on a farm in Manchester, Tennessee that attracted 80,000 campers and was decidedly unpolitical. When a friend recently offered me a free VIP ticket to Bonnaroo, I decided it was an experience that I just couldn’t pass up and was long overdue.

Manchester is an hour south of Nashville, so we decided not to join the other 80,000 happy campers in the heat, but to drive back to her home in Nashville every night. This decision had both good and bad consequences.

Good: We avoided the horrible porta-potties for at least half of the day. I cannot emphasize this benefit enough!

Bad: The music didn’t end until at least 1 a.m. – something we hadn’t calculated. That meant we didn’t arrive back in Nashville until at least 2 a.m. Then we had to get back in the car and drive back after sleeping until noon!

At Woodstock, attendees dressed like hippies because they were hippies. At Bonnaroo, you can pretend to be a hippie and if you don’t have tie-dyed tank tops or flowers in your hair, you can buy them at the many booths offering hippie clothing, fake flower chains, and peace sign necklaces. Some people dressed very minimally – we saw girls who wore a bikini bottom and two strategically placed flowers on top or the well-toned guy who wore nothing but a sunflower. There are plenty of attendees in costumes like superheroes or the Bozo clown guy with the "Go Toward Jesus" sign. We wore non-daring shorts and loose tops (and I wore my 15-year-old Birkenstocks – we walked a lot), but we were more concerned about finding the perfect portable chair to put into our small backpacks. The Bonnaroo Website (Woodstock lacked this convenience) said that large folding chairs were not allowed and we didn’t want to carry around anything heavy. But I insisted on having a chair and we finally found a 2 lb. small chair at REI (and it cost as much as five Woodstock Festival tickets!).

Food and drink were two other pre-Bonnaroo concerns, but they turned out to be easy. Water is abundant and everywhere (unlike Woodstock where the lack of water was a major issue). Much beer is sold and consumed, but being wine-drinkers, we were worried that water was all we would have. Because you cannot bring anything through security that is glass (i.e. a wine or beer bottle), Roof Brothers here in Paducah solved this problem by selling me Wine-in-a-Can (a marvelous invention!). And Food was a great pleasant surprise! There are many food vendors and we had nothing that was bad – quesadillas, crawfish, red beans and rice, gyros, pizza, and teriyaki bowls. 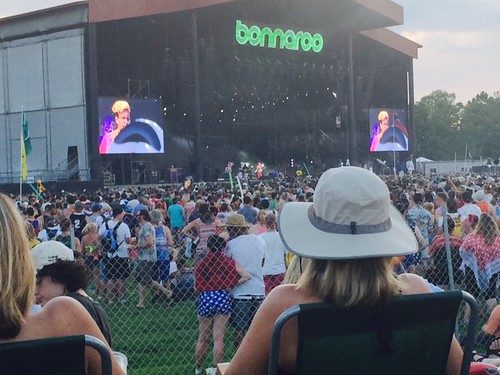 Things that were wonderful about Bonnaroo:

• The Music! I discovered new young music that I really liked: Mumford & Sons, Hozier, and Dawes and other music that I already liked: Alabama Shakes, Earth, Wind & Fire, Ben Harper, Ben Folds. Of course there were some that I really didn’t like: My Morning Jacket, but because the sound systems and stages are so good, I still listened to them. Some of the groups jam together for a few numbers and then there are the guest actors who suddenly appear. Ed Helms of The Office fame played with Mumford and Sons and Jon Hamm and Zach Galifianakis sang questionably with Belle and Sebastian. And there are at least seven stages of music all afternoon and night – you can sometimes hear several stages at once. But everything generally starts right on time and only the last group of the night is allowed to run over.

• The People! What a fun place to people watch! Yes, most everyone is under 35, but they were all happy and having a great time. There are yoga classes, a huge ferris wheel, a large fountain for cooling off, movies, comedians, art, and The Silent Disco—an impossible to describe tent with a DJ and all dancers with headphones silently all dancing and singing to music that as an observer you don’t hear! Bonnaroovians call it silly, sweaty fun. And yes, especially after nightfall, sometimes an interesting aroma fills the air.

• The unexpected things! Uber helicopters flew overhead frequently shuttling rich patrons and artists back and forth from Nashville. Officers on horseback policed the camping areas – we met Clydesdale Clyde and Quarterhorse Gentry (and their officer-riders) who could see over the tent campers (I don’t think Woodstock even thought about hiring police). The flags and totems that the general admission crowd enthusiastically display during performances (primarily I think these are to keep a group together when 60,000 are standing for a musical set) – these included country flags, college flags, sports teams, a balloon shaped like a carp, Hogwart signs, and a light-up Justin Beiber. And every stage has giant screens broadcasting the event live.

• The Bonnaroo Website and phone App and radio Roo as well as a satellite radio station called Spectrum that plays music from the festival! I listen to this station now because it generally plays some of my Bonnaroo music as well as Woodstock era music and some in-between. The website and phone App were essential to us preparing and keeping up with times and stages of music. The website also taught me the Bonnaroo vocabulary: A Bonnaroovian is “a person that has had their mind blown by the full Bonnaroo whammy and has a great passion for finding and celebrating good stuff” and a Roo Newbie was basically me.

• The Wristband with a microchip that gets you into specified areas! Most of the 80,000 attendees have a “general admission” wristband that lets them go to all the music venues and stand with their friends and flags. We thought we had “VIP” wristbands that would get us into closer raised areas to see over the sea of standers and included MUCH nicer bathrooms. We did manage to get into some of these areas, but were told that ours were really “guest” wristbands that still included raised seating in the main venue, but did not include the nice bathrooms.

Things that were not wonderful about Bonnaroo:

Would I go again? Yes, but I would get a hotel room nearby or rent one of the nice RVs right next to the entrance. And I would definitely buy the VIP package – just for the bathrooms – it’s worth it. But I would still bring toilet paper just in case.

And maybe my status could go from Roo Newbie to true Bonnaroovian.