Inch By Inch, Row By Row, They’re Going To Make Their Gardens Grow

If you have ever set your hand to gardening as a novice, you know it is not as simple as putting seeds in the ground and waiting for them to grow. Gardening is equal parts science and art. It is a learned skill. And these Master Gardeners have studied, worked the soil, and enjoyed the fruits of their labors.

If you suffer from garden envy, then it is best advised to not take a peek behind Doug Wilson's house. There, you'll find row after row of vegetable and fruit plants, the size of which would boggle the mind of P. Allen Smith.

Doug's success did not come overnight, however. It is a culmination of a lifetime of learning.

"This is a way of life for us," he says as walks around the garden with his wife Paulette. "We both grew up out here, and if you were living in the country back then and didn't have a garden, you were considered lazy! 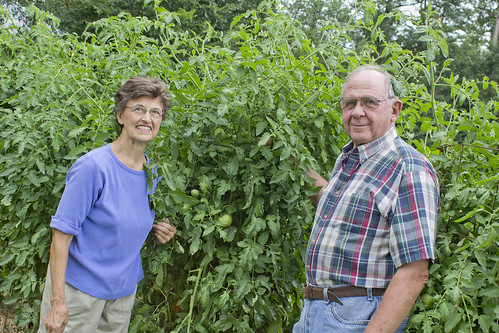 "I remember seeing my grandmother use a hoe. She was an artist. She could work the grass and weeds out and pull that dirt around. It was truly an art form."

Doug's love of agriculture led to his profession as an Ag Agent with the UK Extension office in Paducah. There, he honed his skills, helping farmers across the region as well as growing his expertise in his own, backyard endeavors.

He sees gardening as simple, but it does take work to keep out the weeds. It also takes planning and monitoring to keep the moisture, air levels, and fertilization optimal in the soil. But Doug is still learning, keeping up with gardening techniques and doing his own trials on new varieties of plants.

Like most local gardens, one of Doug's mainstays is tomatoes. Some of his plants are taller than the average man, and their output is prolific. Paulette doesn't let anything go to waste, and come July, she is in the canning business nearly full time.

Paulette cans so much from the summer garden that the couple had a special pantry built in their home. "When the cabinet maker finished, he said, 'That's one hoss of a pantry!'" recalls Paulette. "Then we filled it!"

A lot of the canned garden goods are given away and taken to potlucks. "She'll give a newly married couple a basket as a gift, and she'll say, 'If you bring the jars back, I'll refill them!'" says Doug.

Canning also becomes a larger community event with friends and family coming over to help Paulette. "We have older ladies from the church who will ask us to help do things like shell peas," says Doug. "It is something they grew up with, and they say they just enjoy doing it."

Therein lies one of the main reasons Doug and Paulette love to garden. "I would go to the Paducah market with my mom to buy peas," she says. "We'd sit and shell peas, and later do that with the grandkids. We saved some of the seed from her peas, and for sixteen years we've had Gran's peas in our garden. We've made memories with our own grandchildren with gardening and canning. It is a shared tradition."

"And there is a satisfaction in knowing that they are doing something their ancestors did," adds Doug. "Most everyone can trace their heritage back to a farmer. My parents were supplementing their food supply with at least a small garden at all times. It saves money, and you know where it came from!"

Unlike Doug, Dave Brown did not have an extensive background in gardening. He had friends who were farmers, however, and his curiosity of their skills caused him to ask questions.

"If you ask ten farmers a question, you'll probably get ten different answers," laughs Dave. "But I kept talking to people who are successful growers, and I started to learn. And I guess, in many ways, it's probably just in my blood." 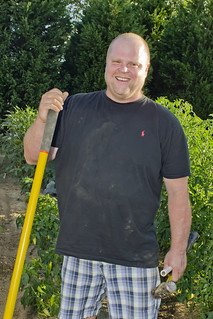 Dave enrolled in a Master Gardener training course through the UK Cooperative Extension office in McCracken County, learning everything from soil management to fertilizing to pest control. He then set his hands to a patch of ground behind his home, creating a space that is equal parts garden and scientific study.

"I do a lot of experimenting out here," he says. "Recently, I have been running an experiment on squash plants. I've raised the pH in the soil to see what happens. I'd like to find out about their susceptibility to fungal infections.

"I've been using different pest control methods and watering with drip lines. I also have added soil tensiometers. They measure the tension that a plant's root has to exert to extract water from the soil. That gives me a better idea on how to approach my watering. I can control a lot of things out here, although I always have the variable of the weather!"

Dave's scientific work seems to have paid off. "I had a tomato last year that was a little over two pounds. I took it into work, and everyone asked how I did it. I just said it was a little TLC!"

It takes a lot of work, but Dave's always satisfied with the fruits of his labor. "It helps me eat a little healthier," he says. "And if you've ever had a garden tomato as opposed to store bought, you know the difference!"