Locally known as JD Wilkes and The Dirt Daubers, JD and Jessica Wilkes have talent that reaches far beyond their musical endeavors. Before touring the globe for performances in a multitude of venues, they both started their scholastic careers in the field of art. It began at an early age for both of them and now they are ready to introduce their creative and handy skills to the fine people of Paducah.

Locally known as JD Wilkes and The Dirt Daubers, JD and Jessica Wilkes have talent that reaches far beyond their musical endeavors. Before touring the globe for performances in a multitude of venues, they both started their scholastic careers in the field of art. It began at an early age for both of them and now they are ready to introduce their creative and handy skills to the fine people of Paducah.

> Click here to see the official video for The Dirt Daubers' "Get Outta My Way."

As you might expect to hear from any man who dares to reminisce of his creative beginnings, JD says, “I started drawing cartoons when I was two years old. Batman & Robin and Bert & Ernie were my first drawings, I believe.” The idea of cartoons and comic books never left JD’s bag of tricks. Recently he was able to fund the production of a comic book, Grim Hymns: Tunes and Tales from the Hills of Hell, with funding from a successful Kickstarter campaign.

It references some tales and myths of Paducah past as well as some alternative takes on music as a means to narrate the amazing imagery. After drawing cartoon characters grew into comics and zines, JD found that both his parents and teachers were very supportive. 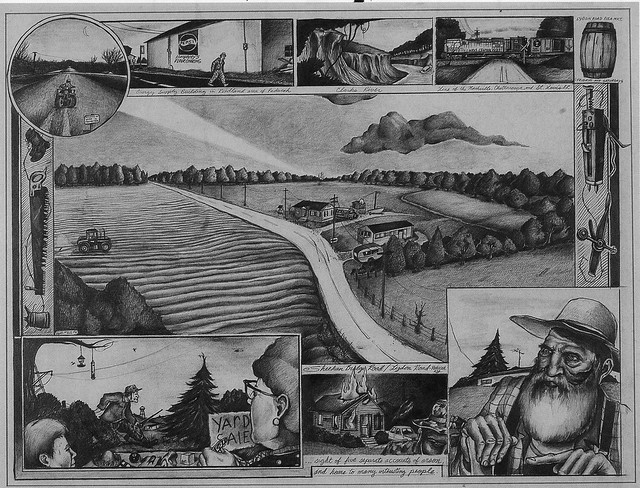 His wife Jessica has a similar story to tell. “Ever since I was little I’ve been drawing. I used to sit at a desk in the basement at my childhood home and draw comics while everyone else was outside playing. I was a very pale kid. In high school, I dodged gym class and hid out in the art room all day.” This love of art and comics (among many other things over the years) became the catalyst for their matrimonial marriage, which later gave way to a marriage of musical talent on the stage.

JD went to Paducah Community College and Murray State University majoring in art. During his time there he was a contributor to the school paper through writing and cartooning. Since graduation, JD has sold hundreds of drawings, paintings, and self-published comic books. Chances are you’ve come across some of JD’s work as it can be found in unexpected places. He has even illustrated a book of Kentucky ghost stories for the University Press of Kentucky, Spookiest Stories Ever.

Jessica’s scholarly pursuits had taken a different route as she and JD had yet to cross paths. Spending three years at the Art Institute of Chicago gave her many opportunities to hone her artistic skills. A very notable opportunity and privilege was awarded Jessica when she became an intern in Los Angeles for renowned Disney animator Eric Goldberg. The Princess and the Frog became a project on which Jessica was able to work, creating some drawings that made their way into the film. During her time in Chicago she met JD at a Legendary Shack Shakers show. It was on a whim that she even attended that show, but ended up talking for hours with this mystery front man about a mutual love of comics. After marrying, the dynamic duo made Paducah their home. 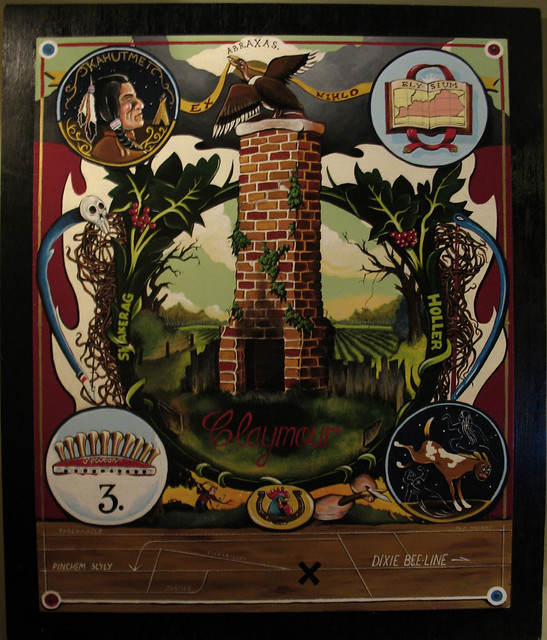 In order to establish oneself as an artist there are many definitions to which many subscribe. These two definitely blaze their own trails. JD is modest, but he absolutely has a worldwide following for his comics, music, and films. Jack White, of The White Stripes, even requested a drawing from the man! Jessica was recently commissioned to create a mural in the Frank Lloyd Wright house in her hometown of Rochester, NY.

After living in Nashville for a time, JD decided to come home to Paducah once again, and even though he and Jessica are traveling quite a bit with their newly re-formed band, JD Wilkes and The Dirt Daubers, you can still catch them around town every now and again. And they are adding yet another venture to their creative portfolio. Wanting to get back into the outsider and folk art realm, they are offering their services to do window lettering, murals, and signage for anyone needing a unique take on the traditional. “The local color is what brought me back to Kentucky and I love to let the same influences seep into my drawings and paintings,” explains JD.

You can see more work by JD on his website at www.jdwilkes.com.