It's 11 a.m., and already there's a slight traffic jam on Jackson Street in Paducah. Hungry hamburger lovers are piling into the parking lot of Just Hamburgers. The lobby is packed, and every available space on the grill is covered with sizzling burgers. Owner Robert Waller smiles as he mans the register, bags burgers and fries, and fills drink cups. "Just wait until it gets busy!" he laughs.

Robert knows hamburgers. Seeing as he's been frying them up since he was a child, it was only natural that he, along with wife Jenny, would be third generation owners of a Just Hamburgers.

"I bought Just Hamburgers three years ago from my parents," says Robert. "Our goal has always been to offer inexpensive and awesome food with excellent, personal service. We want to be something that Paducah can be proud of for years to come."

And Paducah couldn't be more pleased. Just Hamburgers has built a large, loyal following largely through word of mouth. The staff is passionate about their mission to craft the best sandwiches possible with a lively, youthful mindset.

"The atmosphere exudes enthusiasm and energy because we are working tenaciously toward a common goal in a spirit of friendship and fun. Chemistry in the restaurant holds the same level of importance for me as it would for a basketball coach with his team. Our kitchen is like a family. Or maybe it's like a rock group. Or better yet, a supergroup."

Such enthusiasm equates directly to some of the best burgers in town. It also spawns creativity. The weekly specials create a buzz in the burger world, and many wait with eager anticipation for the Monday announcement on social media.

"I come up with most of the specials, but some ideas have come from employees and customers. There are infinite possibilities, so I feel like we can't stop until we've tried everything. At first, people were skeptical about the unusual burgers, but now, many will order the special without even asking what's on it. They trust us now, and that's very gratifying."

Some examples of the specials include the Codie Wodie (created by Codie Franklin), a double burger topped with homemade potato salad, homemade baked beans, bacon, and BBQ sauce. There's the Victorian (created by Victoria Hill), a double burger topped with provolone cheese, grilled onions, BBQ sauce, and banana peppers. And then there's the ever popular chicken sandwich, The Dokkenator (created by Dean Dokken), with a seasoned grilled chicken breast, bacon, swiss, ranch, and Louisiana hot sauce.

Recently, the crew featured The Big Apple, a burger topped with honey cured bacon, fried apples, sweet sauce, and an onion ring. One patron described it as a burger at the "Picasso level."

"This is such a cool town full of people wanting to try new things," adds Robert. "Our customers are loyal and treat us like family. It is truly special. Our customers' enthusiasm and excitement for what's next keeps me motivated. I wouldn't want to do this anywhere else."

So what's the future hold for Just Hamburgers? "We try to improve on something every day," says Robert. "I want to be the best we can be, but I never look too far out into the future. It helps me to visualize Just Hamburgers as a lump of coal that will someday evolve into a diamond. Complacency is not in our vocabulary."

Just Hamburgers is located at 2532 Jackson Street in Paducah, and weekly specials are announced on their Facebook page. 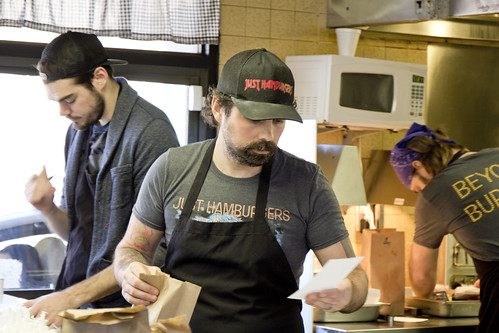