Sitting along one side of a table at Paducah Beer Werks is 80% of the music group, Leonard the Band. They are nearly giddy about the possibilities that lay before them—the possibilities of dinner. They each order a pizza, each one different but equally excited over the choices of their bandmates. At the end of the table, guitarist Luke Taylor places the final order, asking for an extra topping of goat cheese on his. “Oh, wow, that sounds good!” the rest of the band says nearly in unison, all of them asking to add the topping to their own orders.

The scene is the perfect metaphor for the personality of Leonard the Band. Each member an individual with their own tastes, likes, and styles—yet melding together into a cohesive unit that overflows with simple excitement and joy.

The band consists of Luke (guitar/vocals), Zach Winding (keyboards/organ), Taylor Rader (drums), Adam Rader (bass), and Brian Rader (guitar/vocals). “It began when me, Zach, and Taylor started jamming together,” says Adam. “Taylor and I were really good friends. We weren’t even dating yet. I did have a crush on her, though. I decided to teach her to play drums so we could jam together. So it was the three of us. And then my brother Brian said, ‘Let me in!’ And he had the songs, really. He’s been writing songs for a long time.”

From there, they hit the ground running, and Leonard the Band was born. “We put together some songs and booked a show and didn’t even have a name,” laughs Adam.

“Zach and Brian were goofing around, playing off established band names like the Beatles and stuff like that,” says Adam. In the wordplay, they married the names of The Band and Lynyrd Skynyrd to form Leonard the Band. “It was just weird enough to describe us,” says Adam.

That first show was nearly eight years ago. In 2015, as they continued to grow, they added guitarist Luke Taylor. “I was already a huge fan,” says Luke. “I’d already been to nearly every show, standing in the front.”

Under Brian’s songwriting leadership, the band built a catalog of tunes that defied categorization. “That’s been one of the hard parts,” says Zach, “trying to describe what we sound like. It’s little bits of what we all listen to.”

“I’ve been reading up on sending your music to record labels,” says Adam, “and one major piece of advice is to not say that you don’t know what genre you are. And we’ve been pulling that for a long time. It sounds pretentious to say some sort of indie, alternative, rock band. People want to know what you are so they have some sort of starting point. But simply, it’s rock and roll at the core of it. And the beauty of it is that it is really up to the listener. We like to hear what others hear in our music.”

The driving sounds behind Leonard the band are guitar and organ, each trading off in prominence. Those sounds are then overlaid with Brian’s unique vocals. At times, it sounds jangly and poppy, much like Vampire Weekend. But you don’t have to wait long for things to bend, the sounds moving from pop to rock, the mood shifting gears. To describe the music depends on the song, and, sometimes, what part of what song. It’s not uncommon for time signatures and keys to suddenly take new paths, revealing songs that are multi-layered, complex, yet accessible. On the surface, they can be appreciated as fun, highly-listenable pop. They can also be appreciated over and over, each listen revealing something new. If you had to pin it on something familiar, think of the shift of the Beatles from teen-pop to musical innovators all rolled into one. And their influences are varied, from Elvis Costello to The Roots to Burt Bacharach to Herb Alpert and the Tijuana Brass.

Generally, Brian will bring a song idea to the group. Then as they explore possibilities, each member layers in their own talents and influence. “It’s fun to play, for sure,” says Adam. “I know in the back of his head that Brian knows what he wants. And we all have things to put to that to make it a Leonard the Band song and make it ours. Being in a band humbles you. It’s different than being a solo artist. It is a unit. It’s everyone working together, the sum of all the parts.”

“And you see how important each little piece is,” adds Zach. “Instead of one person feeling like they have to write the songs and figure out all the instrumentation, all the pieces are there. They just have to be put together.”

As the band sits, excitedly talking about music and the creation thereof, their pizzas arrive along with de facto leader Brian. He differs slightly from the others, being a little more reserved and introspective. He chimes in with his musical likes and what he respects about other musicians. We ask him about the upcoming Leonard the Band release. “It’s called Growing Pains, Revisited,” he says. “I wrote a song, and I thought I was ripping off the theme song from Growing Pains the TV show. But I guess it doesn’t really. It sort of is but is sort of backwards. I don’t know why I thought that, really. It’s so weird, and I don’t think anyone will probably catch it like I did. I usually get a melody in my mind, and it goes from there. I do a lot of driving, so I’ll hum ideas into my phone. My voice recorder has some of the most ridiculous stuff on it. You might hear me humming and then some random dog barking.”

We sit and talk, the conversation less an interview as it is an overflow of excitement about music and the possibilities of the future. “You’ll be tired of Leonard the Band by the time this album comes out,” jokes Luke.

“We’re gonna have a Leonard the Beer collaboration with Dry Ground, a Leonard the Burger with Just Hamburgers, and something with Piper’s Tea and Coffee,” says Zach. “And in the album with the lyrics, we’ll an original piece of art from a local artist with each song. This town has been so supportive of us and believed in us, and we believe in the people here as well.” 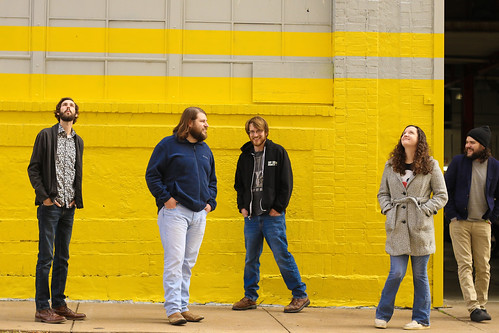