Paducah Public Schools Tackle the Problem of Homelessness, Putting Students and Families on the Path to Success

Eighteen-year-old Brianna stood stoically just inside Paducah Tilghman High School’s office. Outwardly, she was motionless—frozen in place. Inwardly, her thoughts and emotions swirled about in a dizzying array of fear and confusion. Life had not gone according to plan. As of that moment, Brianna had no home, no place to stay. She knew something had to change. And she knew that started with finishing high school.

“I went to get registered for classes,” says Brianna. “I had just left a place where it was a bad situation. I had another place I could stay, I guess, but it wasn’t going to work out.”

“It was a situation where she would have more or less been a ‘guest,’” says Heather Anderson, Transitional Students Services Coordinator at Paducah Public Schools. “She wouldn’t have had her own key or access to the home when she needed. It’s stressful when home really isn’t home.”

Brianna felt alone as she held still in the Tilghman office. But in no time, Heather was by her side—and there she would remain throughout Brianna’s journey.

When students are subject to impermanence and the stress of not having a home of their own, educational priorities are low. “We want to make sure every student is on a level playing field for success,” says Heather. “The most at-risk students need a real chance at education. And education is what will change that student’s situation in the long term. But first, we have work on the immediate problems.”

Those needs keep Heather busy on a daily basis. “I connect students and families with resources. I check on grades, attendance, and behavior. I make sure they have the things they need, all the way down to their clothes and food. I’m a mom. In any given day, I guess it’s a combination of firefighter and fairy godmother.

“We also have an after-school program where we can work on homework and any gaps in education. And we get to have fun. Play is really important. They can just let go for a while. We also work with the entire family, helping parents with employment and connecting them with housing.”

The results are evident, says Heather. “We’ve seen kids go from bad grades and pretty yucky behavior, thinking only about how they were going to live life after school every day, to kids who are engaged and doing well, looking forward to what’s in the future. They finally have long-term goals.”

The Students in Transition program is a priority for Paducah Public Schools. While schools must have certain policies in place due to the federal McKinney-Vento Act, the system takes the mission of helping transitional students to heart as their vision statement is to know each and every student by name and need. Even after losing a key grant that supported their efforts, the school system found a way to keep Heather in place. And the mission is one for every employee. Many times, Heather is called into action on a student’s behalf after a staff member notices changes and discovers that the student is in a transitional situation. Additionally, there are community members who donate resources to help meet needs. In the 2017-18 school year, Heather assisted over 200 students. As of mid-January of this year, Heather worked with over 160.

Back at Tilghman High School, Brianna found housing and has since been completing credit recovery. “It’s meant everything,” says Brianna. “And Heather—gosh, I want to cry. She’s helped me so much. I’ve made so much progress. I just wasn’t getting anywhere before that. I knew I had to do this for myself.”

Quran Dunbar’s Facebook status said it all: “I finally made it. I got knocked down and put myself in a place of darkness, but now I shine with success and hope that I thought I never had.”

Quran had just received his diploma, an accomplishment he’d never imagined when he first met Heather via Paducah Public Schools.

“He’d been kicked out of some places and even had slept on park benches some nights,” says Heather. “We got him connected to Job Corps. He got his high school diploma, got a certification in welding, and is continuing to get his certification in electrical work. Just to see him go from a sad kid to what he is now is amazing. He’ll text me and say thank you for getting me here. I let him know that I just connected him with a resource. He did the rest. He did the hard work. And now, he’s this sparkling person.” 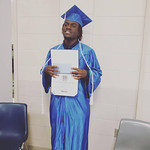 “I had a lot of issues going on,” says Quran. “I was staying on the streets a lot and wasn’t committed to school. I isolated myself and blocked everybody out. But my teachers and people at the school knew something was up. They could tell. Mrs. Heather talked to me, and knew I needed to change. She cared a lot and wanted to see me succeed. She said I had something good inside me that I couldn’t see myself.”

Quran pauses to think about his path to this moment. “I’m shocked at how far I’ve come,” he says. “If it wasn’t for Mrs. Heather, I’d be dead or in jail, I’m sure. I hope she’s helped to change other people’s minds like she changed mine. There’s a lot of people on the streets who need to be saved.”