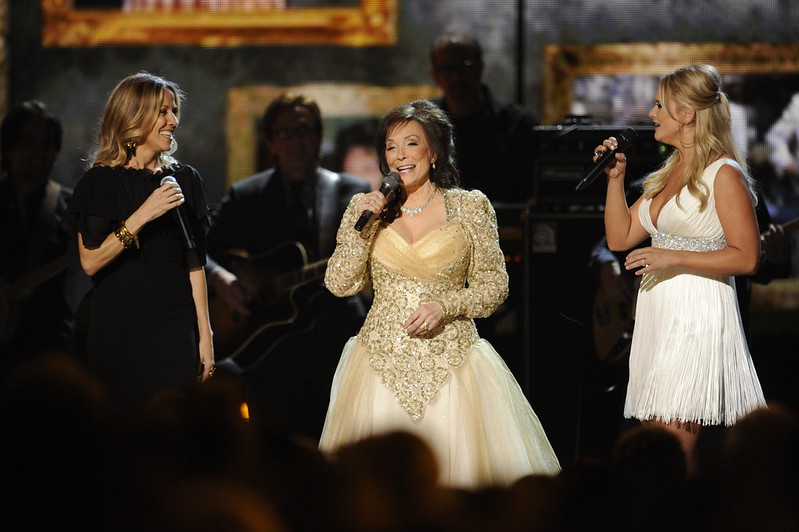 It was easy to feel trapped. No matter which way little Loretta Webb looked, she saw walls. Hemmed in by the mountains of eastern Kentucky, the barriers were more than geographic—they were hewn from abject poverty.

The oldest of eight siblings, Loretta could only help by caring for the other children as her family barely scraped by. Her father started as a sharecropper, etching out just enough to barely maintain a ramshackle shack. Life was beyond arduous, and those living in Butcher Hollow sought escape any way they could.

“There was one person in that holler that had one of these tiny radios,” Loretta says in the Ken Burns documentary Country Music. “And on Saturday night, everybody would end up at that one house and would listen to the Grand Ole Opry. Daddy, when he got his job in the coal mine, got a Philco radio. That was the greatest thing that ever happened to us. I’d go to sleep every night with that radio with a blanket over the top of me. Sometimes I’d be froze to death, but I’d listen to that radio.”

The music gave Loretta wings, transporting her soul over the mountain ridges to the world beyond. She tucked each song into her heart, singing them to her siblings as they went about their daily chores. She recalls her mother listening to the bluegrass of Bill Monroe on the radio and dancing around the house. Country music gave the Webb family an escape.

At the end of 1947, at the age of 15, Loretta met “Doolittle” Lynn. Within a month, the two were married. Doolittle took Loretta to Washington state where he worked in the logging industry. She had four children in quick succession. Doolittle, knowing her love for music and her talent, bought her a guitar and encouraged her to perform. Loretta worked diligently to improve her playing and master songwriting. She’d often line up her children, singing her songs for them. Loretta formed a band and performed regularly in a couple of different taverns.

Norm Burley, who’d heard Loretta sing on a local television show, sent Loretta to L.A. to record her song “I’m a Honkey Tonk Girl” in 1960. Doolittle mailed thousands of copies to radio stations across the United States. Then, he and Loretta struck out on a road trip to visit as many stations as possible. They slept in their car, eating sandwiches along the months-long journey. Loretta would slip into a dress, go into a station, and relentlessly request that her song be played. She’d then head back to the car where she’d change back into jeans and head to the next stop. By the time they arrived in Nashville three months later, the song was number 14 on the country charts.

Loretta became a part of Nashville’s country music scene. In 1961, just after Patsy Cline was involved in a serious automobile accident, Loretta sang “I Fall to Pieces” live on Ernest Tubb’s radio program. Patsy heard it in her hospital room and sent her husband to fetch Loretta. The pair met in Patsy’s room shortly thereafter and became close friends. Patsy mentored Loretta in the music business. Once, while on a tour together, Loretta ran out of clean underwear. Patsy gave her some of her own. The underwear is now in Loretta’s museum on her ranch.

Doolittle had been Loretta’s biggest fan, encouraging her to share her talent with the world. He also gave her the fodder she needed to write some of the most memorable songs ever penned. While Loretta inexplicably loved him, their relationship was marred with Doolittle’s alcoholism and adultery. Loretta pushed back, displaying the fiery spirit she’d become known for. Moreover, she poured her life into her songs. And it resonated with women.

Loretta recalls how one of her first major hits came after meeting a concertgoer. “This little girl comes backstage at a show,” she says. “She had her hair up in curlers and no makeup on, and she was telling me about how her husband wouldn’t bring her to a show. She says, ‘I want you to look—he’s sitting out there on the third row with this gal he’s been going on with.’ And I looked out there, and I seen this gal all painted up. And I said, ‘Honey, she ain’t woman enough to take your man.’ And I went to the dressing room and wrote it right away.”

The song, “You Ain’t Woman Enough (To Take My Man)” was released in 1966 and propelled Loretta into a new realm. She followed it up with the autobiographical “Don’t Come Home A’Drinkin’ (With Lovin’ on Your Mind.”  In reflecting on her popularity, especially among female listeners, she says, “They were going through the same thing. And they knew I was going through the same thing, too. They just bought the record and would see their husband coming and put it on and turned it up!”

Later, Loretta released “The Pill,” a song advocating for women’s rights in reproductive choices by taking birth control pills. Not surprisingly, it was controversial. Her label shelved the song for a few years, and, even when it was released, many radio stations refused to play it. Its message could not be ignored, however. The song rose in the country music charts and even crossed over to the pop charts.

Loretta released hit after hit both as a solo artist and as a duet partner with Conway Twitty. Her life story became a major motion picture with the release of Coal Miner’s Daughter in 1980. The film was nominated for Academy Awards in 8 categories including Best Picture. Sissy Spacek won the award for Best Actress with her portrayal of Loretta. It cemented Loretta as a legend.

At the beginning of April last year, Loretta Lynn finally got one of her wishes—she had a birthday party. “I’d just never had one,” she said. It only took 87 years. But only a party for Loretta would require Nashville’s Bridgestone Arena and a guest list that included Garth Brooks, Trisha Yearwood, Keith Urban, Kacey Musgraves, Alan Jackson, Jack White (with whom she won a Grammy), and many more. “I love her because she bleeds her heart out of her songs,” said Daris Rucker before performing “The Pill” that night. “Like, you feel that’s real. She felt that. And she knows that. And she’s telling you that. You can believe that or not. But it’s real.”

Over the course of her career, Loretta’s won multiple CMA awards and Grammys. She’s on the Nashville Walk of Fame and the Hollywood Walk of Fame. She’s been inducted into the Country Music Hall of Fame, the Songwriter’s Hall of Fame, the Nashville Songwriter’s Hall of Fame, and the Grammy Hall of Fame. She received the Kennedy Center Honors in 2003, and, in 2013, President Obama graced her with the Presidential Medal of Freedom. President Obama said of Loretta “…this coal miner’s daughter gave voice to a generation, singing what no one wanted to talk about…”

Loretta’s the most awarded female country artist of all time. She’s given voice to thousands of women, helping usher in radical social changes in the 1960s and beyond. Yet, as she would say, she remains a simple country girl from Kentucky. She didn’t think about starting movements. She simply brought her experiences together with her musical talents. “The songs are just life,” she says. “I seen it or I lived it.” And thankfully, for the rest of the world, this songbird from Kentucky was given wings to fly beyond the valley of Butcher Hollow. She spread her anthem to a world waiting desperately for the empowerment of truth.

The Wild World of Patience