Many Are Happy That Happy’s Is Back!
Add comment

Many Are Happy That Happy’s Is Back!

On a pristine, early spring day in Paducah, there emerges a sound that has been noticeably absent in recent years on North 12th Street. Lively conversation and laughter swirl about a group of friends, some old, some new. Their merriment lingers for just a moment before racing through the propped-open door and across the sidewalk to the street in front of Happy's Chili Parlor.

For many years, it seemed as if the Paducah institution was gone for good. On October 27, 1998, Eugene "Happy" Thomas walked the short distance from his restaurant to his home on Martin Luther King Jr. Drive, a walk he'd taken hundreds of times before. On that night, Happy was robbed of his day's earnings and shot in the process. A little over two and a half months later, Happy was gone. So was the historic restaurant.

Nearly two decades later, the door to Happy's suddenly re-opened with son Eugene Jr. at the helm. Many thought Happy's would never return, but Eugene had made a promise to his dad that he would continue the family business. And in doing so, he followed the same path his father forged over fifty years ago.

"My grandmother, Beulah Perkins, was a cook in the cafeteria at Garfield High School here in Paducah," says Eugene. "When she retired, she opened this restaurant in 1927. She really was the best cook in the world. There wasn't nothing she couldn't do! She served pot roast, meatloaf, cobblers and pastries. She even cooked up some turtle!"

For over twenty years after her retirement, Beulah served the residents of Paducah from her humble eatery on North Twelfth. Her son, "Happy," had long since left Paducah with a group of friends to find work. They had settled in the Chicago area, working at a steel mill.

"Dad had really gotten tired of the mill," says Eugene. "He had the opportunity to take over the restaurant, so he decided to come back home. Beulah didn't just give it to him, however. She made him pay for it!"

Happy added his own twist, cooking hot dogs, burgers, and fries. "And chili was his specialty," adds Eugene. "He kind of took it to a whole new level." Happy's famous chili eventually gave rise a restaurant name change.

Eugene never imagined life would be much different within the walls of Happy's Chili Parlor. "I was raised here until I was 17," he says. "After I graduated from Tilghman, I joined the Navy. I became a barber aboard a ship. That turned into my career. I went to barbering schools in San Diego and Long Beach and ended up settling in Los Angeles.

"I rushed home in 1998 when dad was shot. I never really got a chance to mourn. I had to take care of the business and keep things floating. It was a tragedy. And his murder has still not been solved."

Eugene had just been home a couple of months before Happy was killed and, in looking back, had a conversation with his father that seemed guided by a higher power.

"We talked about Happy's," he recalls, "and how it was a family tradition. I then gave him my word that I wouldn't let it fade away." Little did Eugene know how apropos his heart-to-heart would be.

He also didn't realize how much life was preparing him for the restaurant business. "I learned how to barbecue in Compton," he says. "I was going to barbering school in the day and working for a couple of ladies who barbecued at night. They started out doing lunches for McDonnell Douglas employees on Saturdays. It kept growing until they cooked full time. So I learned! I learned how to season and how to deal with the meat and cooking."

After the loss of his father, Eugene couldn't immediately take on Happy's full time. The doors closed, and most of the community assumed it was gone for good. But Eugene made a yearly trek to Paducah to cook during Barbecue on the River. "I just wanted everyone to know that Happy's would come back."

And come back it did. "I still own a hair salon in L.A.," says Eugene, "but I was finally able to return and open the doors to Happy's again. Since I've been back, it's been like it never closed. It makes the community proud that there is a place they can relate to. Many people have been coming here their whole lives, shooting pool and playing pinball and hanging out. I couldn't see that go away."

Eugene keeps most of the culinary traditions alive such as beef tripe and pig's feet. He's still doing chili and chili dogs, and he's added his signature barbecue, slow cooking pork shoulder, ribs, beef brisket, and rib tips. "It's all so moist and tender," says Eugene. "Our motto is 'You don't need teeth to eat Happy's BBQ!'

"I also added the Big Happy Burger. It's a biggie! And if anyone can eat three of them, they get $75. We've had challengers, but they went down defeated." The beef patty is so large, it has to be nestled within four hamburger buns.

"It's the king of the burgers, don't you think so?" Eugene asks a loyal patron.

"Oh, I know so," the loyal Happy's customer exclaims. "It took me three days to eat one!" 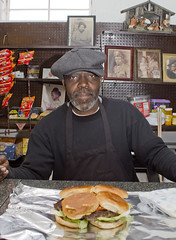 Happy's customers filter in and out throughout the day. Many are old friends. Those who aren't quickly become so. Eugene greets a customer as he comes through the door. "You wan't ribs?" he asks. "Now if you want ribs on a sandwich, I can work with ya here. And if you wan't cornbread, I can do some up for you."

Eugene takes a moment to introduce his customer. "I've known this guy since kindergarten," he says. "He's been coming in here as long as I have!"

Sure, the food is good under Eugene's watch. But it is the sense of community and tradition that overwhelmingly warms the soul. Eugene knows how important it is to those who became Happy's friends throughout the years. And, through his dedication and promise, he carries on a Paducah tradition that many find it hard to live without.