Wes Houser often takes short strolls during work breaks. He moves along at a steady pace, finding solace among the sights and sounds of downtown Paducah. But one building usually makes him stop in his tracks.

He pauses before the facade of the Columbia Theatre. Gazing at the ornate tiles, columns, and busts of Greek goddesses, his eyes come to rest on an empty frame that once proudly displayed all the movie posters that called this theater home.

"I loved this building as a kid," he says. "Just to go in was something. It was the old-time experience of going to a movie. There was the plush carpeting, the art deco; it was an event. I miss that."

Wes loves cinema. He worked at the first multiplex in Paducah and managed several theaters in other cities. As he stares at the empty frame, he imagines the movies that once graced the Columbia screen.

Wes remembers many of the movies he saw at the Columbia, and he recalls other movies from the theater's heyday. He often wonders about certain films, curious if they were shown here.

His curiosity ultimately drove him to the microfiche files at the McCracken County Public Library and an ambitious project that will tell the story of the Columbia Theatre at it's heart: a comprehensive list of the movies and events that took place there.

"We know that It with Clara Bow was the first movie. But who knows the second or the third? Right of the bat, the story gets interesting. Affair at the Follies was supposed to play the second weekend, but there was a train delay, and the film didn't arrive on time. So they screened See You in Jail instead."

Wes goes through the files, looking at every newspaper from every day. He finds information on each week's movies as well as other events and general history on the theater.

"It can get a bit tedious at times," he admits, "but it is fascinating. I can go through about six months of history in a few hours. I am looking forward to movies that I remember, like when I went to see Empire Strikes Back. That was huge! The line stretched around the block."

For Wes, it truly is a labor of love. "Many of these movies can't be found," he says. "Look at this," he says, as he pauses on another page at the library. "It's Hoot Gibson in The Silent Rider. Film preservation in the early days wasn't so good, so things like this may never be seen again. And that line of movies helps tell the story of the Columbia." 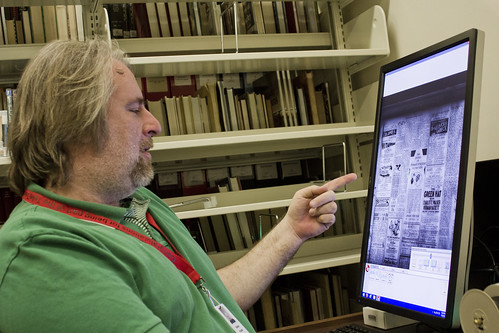