Sara Bradley has come home to her roots.

And we mean that in every sense of the word. She has gradually ventured back to where she grew up, and she has plans to really dig into a philosophy that is founded in lifting seasonal foods right from the earth in which they grow. There are many ways to express this cultural culinary construction but the language locals have been using since Sara started toting her fares around town is “fabulous.” 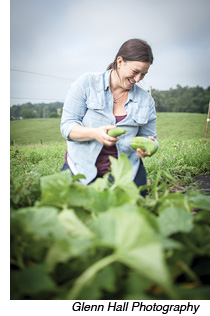 From the classroom for cooks at Johnson and Wales University in Charlotte, NC, to the Country Club of Birmingham, AL, to the Dovetail in New York City, to the Blackbird in Chicago, IL, Sara has honed her kitchen chops in some of the best beef and bourbon backrooms east of the Mississippi.

And now Sara has made her biggest move yet—to a kitchen she has personally designed and equipped to meet the demands of the delicacies that will soon be artfully crafted in our very own city of arts and crafts. Soon Chef Sara will join a growing line-up of young professionals (see Jan/Feb PADUCAH LIFE Magazine) who are choosing to play out their passions in a place that honors their energy and entrepreneurism.

In a building that has seen tons of fruits and vegetables pass through it’s brick walls and vaulted ceilings during the past century, comes a 21st century reincarnation of its early origins. Sara Bradley’s freight house restaurant will be housed in what was once the Paducah Freight Depot on Third Street. Sara and her architectural associates are putting a new face on a familiar façade—one that served as a pass-through from farms and gardens around the country to the store shelves and tables of past Paducahans.

Soon the tables beneath its heavy wooden beams will be laden with the labors of Chef Sara and her team of food fabricators. The look will be fresh and the veggies and meats will be as well. Sara plans to partner with local growers and sources from around the region to harvest the bounty of the seasons and then have it delivered to discerning diners with a flare that only Paducah’s newest chef can conspire.

Q. What brought you to this concept of seasonal cooking?

I don’t know if I chose the farm to table concept or if I just tagged it as that because it has become an easily recognizable term. When I decided to move home I made a conscious decision to use the ingredients around me to help support my community and my passion. I believe that eating is an ethical act. By supporting the people and lands around my home, I honestly feel like I’m doing the right thing. When there is an honest exchange between the producer and consumer, everyone benefits.

Q. Are you a gardener?

As a child the extent of my gardening was mowing the lawn on Saturday! And for the last 10 years I’ve lived in large cities in apartments, which meant porch tomatoes and potted herbs. Since I’ve moved home, my mother, Beverly {who will be the freight house baker by the way} have put up tomatoes, peppers, lettuces, at least 15 types of herbs, and edible flowers. I visit Little Texas Farms often and get farm updates from the owner every Monday and Friday.

Q. How did you educate yourself on seasonal farm-fresh cooking?

There is no better way to educate yourself about seasonal cooking than to put your hands in the dirt. Talk to the people that are butchering the meat. Go the market and ask what is coming next. If I think back on what my grandmother and mother served me, I realize I have been eating this way all my life. My mother made strawberry pie in the late spring, pecan pie in the fall, then coconut cream in the winter when there were no fresh fruits. My grandmother always had apple butter to handout in the fall and winter. She would process bushels of apples with her sisters at the peak of ripeness. A friend once told me her grandmother said, “We didn’t call it organic, we just called it food.”

Q. What inspires your menu selections?

There is a basic way to think about flavors. You picture them as a spider web. Pork is delicious with apples and smoke. Apples pair well with almonds and smoky things love to be paired with fat. So it just makes sense that a smoke almond yogurt would be delicious with pork. I’ve also learned that if it grows in the same season or region it will most likely taste wonderful together.

Q. Who would you like to have dine at your table?

I would really like to have my maternal grandmother eat at my table. Rose Silverman is the only one of my grandparents that I don’t share any food memories with. I would love to have all my grandparents to join in. My Grandpa Bradley grew a garden so large he supported several families. He would be proud of me and the way I treat my products. My Gimper (what we called my paternal grandmother) was one of the best cooks I’ve ever met. She never wasted anything by picking and canning everything before it had a chance to go bad! And Bill Clinton. I don’t know why, just Bill Clinton.

Q. What foods do you most like to prepare?

I love using fruits in savory dishes. When you cook seasonally, certain items have a short period of availability, so you use it when you have it. I love radishes, but have realized not all others do! I foresee the radish making a comeback like kale and Brussels spouts! And I’m truly happy making biscuits. Something about rubbing the butter between my hands to mixing in just the right amount of super cold milk for each batch to then patting the dough out by hand and using the same cutter I’ve been using for years, makes me happy.

Q. What was your favorite restaurant experience to date?

The restaurant I’m most proud of is Dovetail in New York City. They thought they were getting a sweet country girl that liked to cut up animals and loved veggies. They soon figured out I was an accomplished butcher with a love of seasonal cooking. I worked my way up from the bottom position in garde manage to sous chef in under three years. I learned more from working for John Fraser than from any other chef. Dovetail received its first Michelin Star while I was working there. It’s a feeling I hold dear and strive to feel again one day! 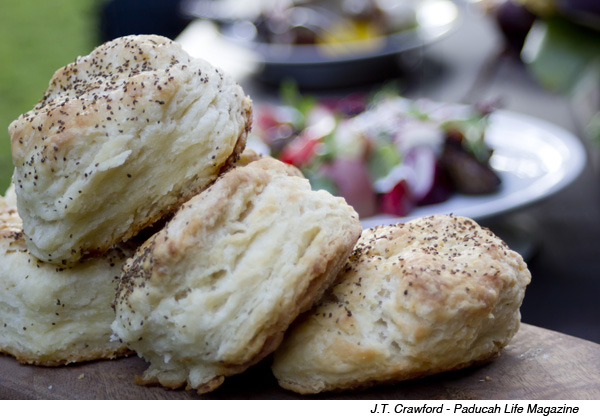