Off to the Derby

For these western Kentucky women GOING TO THE DERBY takes on a whole new meaning!

Singer/songwriter Jim Croce was known for endearing love songs. In 1973, he waxed poetic about an astonishingly uncommon woman for whom it was love at first sight.

She was five foot six and two fifteen, a bleached-blonde mama with a streak of mean. She knew how to knuckle, and she knew how to scuffle and fight; and the roller derby program said that she was built like a 'fridgerator with a head. Her fans call her fluffy, but all her buddies call her spike.

By the time Croce penned those lyrics about his Roller Derby Queen, the derby was nearly forty years old and contained little sport. It was mostly a pre-scripted, choreographed melee akin to professional wrestling.

The allure was undeniable: we always find interest in the bad girl; and these girls were bad. They were brusque. They fought like men. And they exuded a sexuality that our culture found irresistibly forbidden.

Fast forward another forty years to a typical Monday morning in Western Kentucky. A mom in Paducah wakes up to her early-rising three- and four-year- old children. She prepares their breakfast, does her hair and make up, and heads out to her job as a speech therapist in a Metropolis nursing home. Nearly 30 miles away, a customer service rep at Mayfield Electric & Water barely gets through her office door and turns on the lights before the phone starts ringing and she fields calls from customers. And on I-24 in McCracken County, a young nursing student heads toward a big exam at WKCTC, nervously rehearsing the knowledge she jammed into her brain the night before.

> Click here to learn a bit of background about the sport of roller derby.

Meet Teri, Jenny, and Allie. On Monday morning, they are like any other mom, employee, or college student. Come Saturday night, however, they will transform into roller derby queens. They represent the re-emergence of the derby as a true sport. And while their on-track personas may seem light years from their lives outside the derby, there is a place deep within each of them that lives wholly in both worlds. Meet Bebe Tango, J-Ploww, and Ginger Slice, some of the toughest competitors with the West Kentucky Rockin' Rollers.

"We're all mean, scary women with violent streaks. That's what some think," says Teri, aka BeBe. "But some of the sweetest girls I've ever met have been here." BeBe herself is far from scary. Her appearance is delicate. Her long, dark hair contrasts her fair, doll-like complexion. She exudes a quiet, yet confident beauty and describes herself as naturally shy. "I am not normally an aggressor…definitely not the type-a personality." While that may seem like a disqualifier for the roller derby, it was an attraction for BeBe. "It's really helped me break out of the mold us women sometimes get stuck in. Yes, I am a mom; yes I have a career; but there is something in the derby that is just for me. I can come out of my comfort zone and do something I wouldn't normally do. I am more outgoing now overall. Everyone needs that outlet. It keeps us level-headed and balanced."

The same is true for Jenny, aka J-Ploww. "I am from Livingston County, I work about 50 hours a week, I'm married, I have a twelve-year-old son and two cats. And when I started doing this, people thought I was crazy." At the age of 34, she is the oldest member of the WKRR squad; but skating has always been in her blood.

"I've been on skates almost my whole life," she says. "I remember skating in pre-school. I was at Kingsway every time the doors were open. I sort of felt like rink royalty by my teen years because I was there all the time.

"When I was 31, I got a flyer for the roller derby. I'd never heard of it and had to see it. I am an awesome skater, no doubt, and I thought that there's no way they could be better than me. When I saw it, however, I really thought that the girls were intimidating. I was recruited, and I quickly found out that because you can skate doesn't mean you can do derby. I am by far not the best. But one day, when I'm 80, my grandkids will look at old pics of me, and they'll say, 'My grandmother was in the roller derby!' It will be cool."

One of the youngest WKRR members, Allie, aka Ginger Slice, found a much larger world than she'd ever imagined in the roller derby. "I had played softball and loved being involved with sports. When I heard about the derby, I had to check it out. I went to a practice and found out I couldn't skate for nothing. I looked like a baby deer! Everyone kept asking, 'Are you sure you want to do this?' And I wondered if I really wanted to. But I decided I was going to do it." What Ginger discovered was more than sport; she found community.

"It’s good exercise, and it does relieve stress; but I also have a new family. There's no preconceived expectations, no judgment. I am a student, and I'm high strung about school. Sometimes I can't make it to derby practice. There is still a ton of communication, however. They are checking on me, helping me, giving me so much support in my life. When I do get to practice, I get that stress out and just feel like I am with my family again." 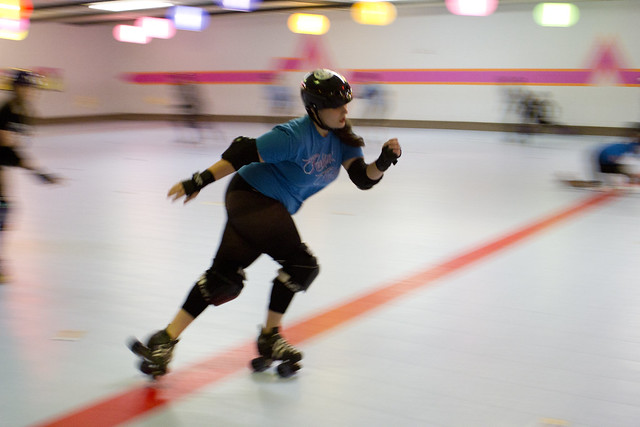 It's a sense of community and family that the girls of WKRR hopes extends to everyone they come in contact with. "Because of its theatrical past, the derby sometimes carries bad connotations," says BeBe who is the co-president of the league. "Sometimes we have to convince people that this isn't the derby of the past. It is community oriented, and it is family friendly. The majority of our skaters have kids, and we want this to be part of their lives as well. There's not a practice where kids aren't involved. And through this, we want to teach them teamwork and community."

The team takes their role in the community seriously. At every home bout, the profits go to local charities. "We've helped Tent City Missions, local food banks, Project Hope and others. As a group we are a monthly sponsor to St. Jude and participate in the Alzheimer's walk. We took our earnings last November, went to Toys R Us, and just went crazy helping a family provide Christmas for their children. It's not just a part of what we do but a major reason why we are here," she adds. The group has also applied to become an official not-for-profit organization, allowing all their sponsorships to be tax-deductible.

"It's great being part of something that is organized and helping others," adds J-Ploww. "These are things we couldn't do on our own. It takes a group effort."

And even though benefits such as community service, a supportive and loving community, and an outlet for exploring untapped personality traits are a major draw, that doesn't mean the derby girls are any less dedicated to their sport. BeBe, like many of the WKRR girls, is an advocate of the derby. "The falls are real, the hits are real, the emotions are real." And if they tell you they work hard, they mean it.

"It's about practice, practice, practice," says J-Ploww. "Before we practiced at Kingsway, we met in an old warehouse that didn't have air. It had to be about 120 degrees in there some days. We sweated our butts off! There was just a few of us, but we knew others would want to be a part of it eventually and that it was worth it. So we kept pushing."

She explains the sport as being mostly mental. "That's about 75% of it," she adds. "We aren't just skating in circles. We are a team, and we're listening, catching signals, and looking at hand signs. We're always trying to anticipate what will happen next and make good moves. And it's a workout. We do timed laps for practice. As many as 100 laps. It's very physical, and you have to be able to take hits. But you also have to develop the ability to analyze your surroundings and learn."

The team is working toward being a part of the WFDA, the Women's Flat Track Derby Association. "They are the governing body for this sport," says BeBe. "They set the rules and have tests that must be passed in order to be a part of the derby. Our readiness is not quite there yet, but we are competing against WFDA leagues and learning from them. Together, we are working to get the roller derby in as an event in the 2020 Olympics." The potential inclusion has already been announced by the International Olympic Committee and will be up for a vote this year.

"Sometimes it's just hard to convince people of the genuineness of the sport," adds BeBe. "But I really see a big movement coming in the next decade. It's already hitting the mainstream. It was featured as one of the tests on The Bachelor. A Dr. Pepper commercial portrayed a derby girl who was a mom and skater. It's coming up, and we're seeing it in more and more places."

"It's just really addicting," adds J-Ploww. "It can be overwhelming sometimes when you consider everything that makes up your life. But once you're in, and it comes down to derby time, you have to go!"

So if you happen to bump into a shy, unassuming young lady, and you receive an unexpected body check in return accompanied with a demure little smile, you may have just run into a West Kentucky Rockin' Roller. And don't let her unassuming aura fool you. She's a roller derby queen through and through.