Chris Black may be a musician, but first and foremost, he's a music fan. He can usually be found in his small apartment, working out a tune on the guitar or the organ in the living room or maybe even on the piano in the kitchen. A Jimi Hendrix throw hangs over his bed. A photo of Chuck Berry is tucked into the corner of a mirror on another wall. A heavily shellacked image of the BeeGees hangs just over Chris's shoulder. He bought it for $20 just because once he saw it, he couldn't imagine living without it. A row of vinyl albums tells the story of his musical influences.

"I'm just really big on American music," he says. "I like things from blues in the 1920s to Elvis and Eddie Cochran. I even like jazz, although I may need a little more intelligence to really get it! But every generation and every decade in America has produced something that I like. If it is genuine, it's good. I'm a fan of music that isn't trying to sell itself to you."

Once Chris started making music of his own, he moved from his hometown of Salem, IL to Music City USA (aka Nashville) in 2006. "I went down there to learn. I didn't want to be Travis Tritt or anything, but I needed to be around people better than me so I could get better. I needed that education. A couple of friends kept coming up to Paducah and playing from time to time, so eventually I came back up this way and settled here."

Chris eventually established the band Oh Yeah Dakota! and admits the beginnings were a bit rocky. "Being in a band and making music is fun, but it also takes a lot of work and dedication. You have to find that right mix, I suppose, and it took a while for that to come together for us. I think pretty much everyone in Paducah has been in this band!"

The current lineup includes Randon Gardner on drums and Josh Cornelius on bass. Josh's education in music includes lessons from some of Paducah's best. "I learned from guys like Herb Chapman and Daniel Morrow. I started playing live around here in some of the little punk clubs. When I was in the army in Colorado, I got into the folk scene, playing mandolin and banjo."

"Josh is one of those guys that if it has strings, he can play it!" laughs Randon. "Yeah, I'm his number one fan."

Randon, like Josh and Chris, credits his musical interests to influences early in his life. "I grew up listening to every kind of music possible. My dad was in the radio business. Even to this day, I've not even heard all of his music library. I got my first drum set at Christmas when I was thirteen and learned by simply being in bands. I was in a band with Josh, and he had started playing with Chris, so I guess that's how I got roped into this."

"Whoa, whoa, whoa," interjects Chris, smiling. "You mean, that's how you got this opportunity!"

It didn't take long for the trio to get to work and tighten up the Oh Yeah Dakota! sound and begin work on a new album. "We started on December 27, 2012, and it has been a community process all the way," says Randon.

"A lot of people who have helped with this project are active in the music and art communities," adds Chris. "They've been so giving. That is what I love about Paducah. There are so many talented people here, and they help one another. It is right between my hometown of Salem, IL and Nasvhille both physically and philosophically."

The group also amassed a loyal fan base through local, live performances. "We like playing live, but that can be tough. It takes a little more to get a crowd interested in original music and not just cover songs. It takes more of their attention when they are out having a good time, having drinks with friends. We have to entertain, not just play 25 songs that sound alike."

And entertain they do. When Oh Yeah Dakota! plays, the crowds are a bit larger and the energy in the air is a bit higher. "We really owe a lot to JP's," says Chris. "They let us play there when we really sucked. We'd wrap up a night, they would ask us to come back, and I'd ask, 'Really?'".

"And people started showing up to hear us!" says Josh. "We'd turn up and be like, 'Whoa, there's people here!" "You know that saying, you don't know what you've got 'til it's gone?" asks Chris. "Well, we didn't know what we didn't have 'til we had it."

By the end of the summer of 2013, Oh Yeah Dakota wrapped up recording and mixing on their new album and released Gas Station Girl, the first single from You Must Be Quick. The track is decidedly American rock with an air of John Mellencamp. It is, however, purely Oh Yeah Dakota! True to the band's style, each track on the album has its own personality.

The title track reminisces about the old days in the American West, mixing western and cowboy themes with easy-going rock. The result is a completely unique and refreshing track that sounds like no other.

"This album is very melody driven," adds Chris. "It is more of a production than anything else we've ever done. We've been super busy with it and put a lot of work into it… so busy that I grew this beard on accident! And if I could convey one message to everyone, it would be this: buy this album! It does come with a money back guarantee, but be sure to read the fine print really, really hard!"

You can keep up with Oh Yeah Dakota! on their Facebook page, facebook.com/ohyeahdakota. Their album You Must Be Quick is available at Etcetera for $7. 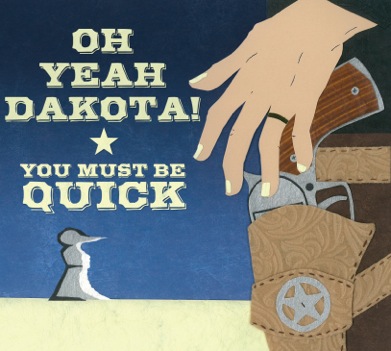