Once More, With Feeling

Michele Len Venable doesn’t remember her father singing much but she loved it when he called out “Pennsylvania 6-500” with the rest of the boys in the band when they performed the swing era classic. Dropping the “O” in Olen and eliminating his surname, Martin, Olen Foster Martin, Jr. adopted the stage name Len Foster and became bandleader and the “boss” of the Len Foster Orchestra.

The Len Foster Orchestra was the official dance band for Murray State Teachers College from 1942-1943 before World War II and post-war 1946-1949. It was considered one of the best in the university’s history and many believed its sound rivaled the era’s famous big bands led by Glen Miller and Duke Ellington.

Originally from Lorain, OH, where in high school he had a 13-piece band, Len was encouraged to attend the college in Murray by his school’s band director who was a Murray graduate. With a strong musical tradition and long line of dance bands to their credit, administrators at the school were recruiting musicians with the enticement of financing their educations by doing what they loved best.

Martin fronted and played trumpet in the band and was also the business head of the group, negotiating and managing bookings and keeping “the book” which was the compilation of the band’s music and arrangements. 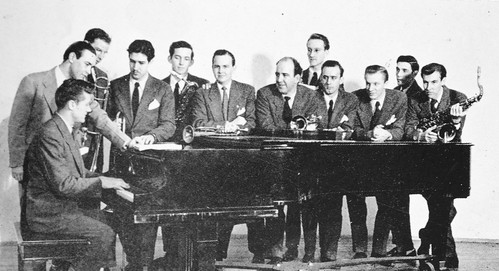 The group disbanded for the war and Martin served in the Army in a special service unit performing in “jeep shows” for soldiers who longed for sounds of home and thirsted for the music left behind. To bolster the morale of the troops, the bands would play as far forward as the command posts with their instruments competing with the sounds of artillery fire and exploding bombs.

“My father told me about stopping the music to ask if battles were getting too close for safety. Assured the action was further away than it sounded, the band played on without missing a beat as bombs dropped and artillery fired,” Michele recalled.

During the war years, letters home were written from dark, dank castles where Martin and other band members stayed. His buddies included celebrities Red Buttons and Mickey Rooney who were also called to serve their country.

Like so many WWII veterans, Martin didn’t talk about the war a lot but Michele remembers one story distinctly. “The band showed up to play one night and a highly decorated and extremely agitated officer yelled, “You’re late!” The guys in the band were trying to figure out who he was when they were told he was none other than “Old Blood and Guts” himself, the intemperate General George S. Patton.”

From another page in history, he performed at the Potsdam Conference for historical figures Stalin, Truman, and Churchill. 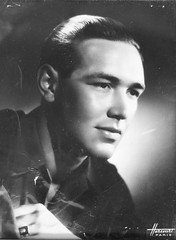 While in the Army, Martin attended the University of Paris Conservatory of Music and returned a more accomplished musician for having learned the intricacies of arranging music.

As indicated in a yellowed newspaper clipping in Michele’s scrapbooks, the band picked up where they left off when the war ended, “After a four-year absence, Len Foster and his Orchestra have returned to the Murray campus…Playing sweet styled music for 50,000 dancing feet in nine months in six states. The new Foster signature is, “You Go to My Head.”

When Martin returned to Murray, he met Jeane Van Hooser, daughter of Metropolis mayor and notable Illinois politician Arthur Van Hooser, who was also the owner and pharmacist of Van Hooser Drugs. The beautiful music major performed with Len in the campus musical, “Campus Lights” and would go on to sing with his orchestra. Most importantly he married the talented young lady and Jeane Van Hooser would become Mrs. Olen Foster Martin, Jr. and Michele’s mother.

To be expected, Michele, a Livingston Central High School Spanish teacher, is musically inclined and a member of the Immanuel Baptist Church Sanctuary Choir and the Paducah Symphony Chorus. Michele and her husband, Jay, live in Paducah.

Ending the trip down memory lane and remembering one of his signature songs, Len Foster’s loving daughter and biggest fan, Michele, sums up wistfully, “What I would give to hear him play ‘One More Once’ again.”