A few years ago, we experienced a truly magical moment. It happened on Broadway in front of the Irvin Cobb Hotel. For a time, it was 1952 again as three friends gathered for an impromptu reunion.

In our July/August 2012 issue, we took a look back to 1952 when LIFE magazine visited Paducah and profiled the emerging atomic city. The LIFE photographer took his camera downtown one night just in time to see a large number of high school students in formal attire exiting the Irvin Cobb Hotel.

He saw the potential for the perfect shot and asked four of the young ladies to congregate in the foreground. The photo garnered a full page.

“We didn’t know what he was doing or who he was with,” says Sue Chappell, one of the young ladies. “We didn’t know until it came out in LIFE magazine. People were just ecstatic about it.”

Sixty years later, when Paducah Life posted the same photo on Facebook, the people of Paducah lit up with a renewed excitement over this vintage photograph. It was shared, viewed, and commented on more than any other Facebook post we’ve ever had.

Through the course of the discussion, we discovered that the four ladies who were serendipitously chosen for the photo remain friends to this day. Betty Wallace, Sue Chappell, Jean Peyton, and Joyce Champion (who now resides in California), have often reminisced about the days surrounding that iconic photo.

“It was a Lone Oak Junior/Senior banquet in the ballroom of the Irvin Cobb,” says Sue. “Some of the girls, like Betty, were from Tilghman. “The ballroom was a gorgeous, gorgeous place. And we could dance. Dancing wasn’t allowed anywhere in Lone Oak at the time. The Baptist minister wouldn’t allow it, period.”

“There was one exception,” laughs Joe Wallace who was at the 1952 banquet but is not in the photograph. “We danced at Carter’s Restaurant late at night after it closed. I guess we’d figured the preacher had gone to bed!”

“It was a wonderful time,” says Sue. “Movies were very, very popular. There were always New Year’s Eve midnight movies, and the lines would stretch out from the theater and around the block. Not many of us had cars, but one of our friends did. We’d all pile in and drag the gut. There was also a drive-in theater in Lone Oak.”

“Yeah,” laughs Joe. “We’d hide in the cemetery next to it and then sneak over to see the show after dark.”

“The atomic plant going up really didn’t mean that much to us at the time,” says Betty. “It did the next year when we got married, however, and we couldn’t find a place to live!”

“The worst thing you could do back then was drink a beer or smoke a cigarette,” adds Sue as she looks across the LIFE magazine spread. “This photo really takes you back to the good old days.”

And now, 60 years later, as we stood in front of the Irvin Cobb for a few photos, we watched as three longtime friends laughed and carried on as if it were 1952 all over again. A photograph captures but one moment in time; but who’s to say that a single moment cannot last a lifetime in our hearts? 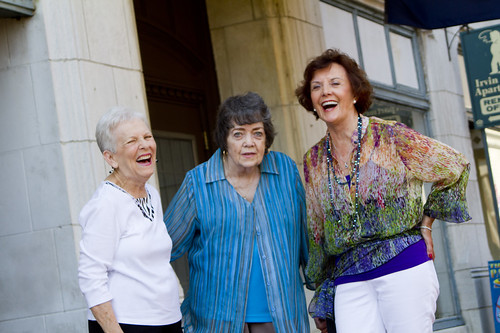 So what else was going on in the summer of ’52 around Paducah?

Singing in the Rain premiered at the Columbia theatre.

A drought caused the rationing of water for uses such as watering lawns.