The internet gives rise to voice. Anyone, anywhere, is a potential mass communicator. And with ease, one's voice can be heard around the world through a podcast.

Several in Paducah are taking to the virtual airwaves, reaching out to audiences both near and far.

The landscape of political podcasts is fraught with stereotypical viewpoints, vitriol, and more shouting than listening.

Sarah Stewart Holland has always loved talking politics, but isn't a fan of the tone of the typical conversation. When her sorority sister Beth Silvers proposed they start a podcast, she saw the chance to bring a fresh perspective to the news without the traditional, bipartisan bickering. 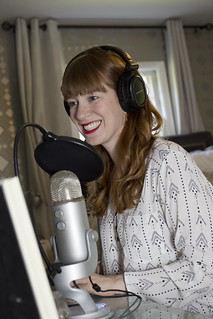 "We have good chemistry," says Sarah. "And we're not trying to be neutral; we're trying to be transparent. People don't want you to pretend you don't have a viewpoint, they just want you to be honest about what it is.

"And we remember that we are really on the same team. We are not trying to win. It's not a fight. This is not a game. We step back and look at what we are trying to accomplish, what our perspectives are on how to get there, what our common goals are, and where we agree. People have gotten too hyper-polarized. There's too much at stake for that. And we found that people are thirsty wanderers in the desert, looking for polite, political discussion."

And thirsty they are. Pansuit Politics went from about 200 listeners to almost 12,000 in two weeks after iTunes tweeted about the podcast in their New and Notable section. Then bustle.com listed them as one of five informative political podcasts to listen to. They joined the likes of NPR's politics podcast as well as Meet the Press who were also on the list.

"We couldn't believe it!," says Sarah. "It was surreal to see our podcast listed among such power players. I think we came along at just the right moment. We've had so many people thank us for disagreeing and debating without insults or name calling. It doesn't seem like something that should earn so much praise, but it does!"

"You do know what we do, right?" asked Todd Holloman when we approached him about doing a story on the Basterds. The question was appropriate. The Basterds are oft offensive, sometimes finding humor in the darkest of places. In their defense, however, they are equal opportunity offenders. And it's funny even if sometimes uncomfortably so.

The Basterds are Todd Holloman, Cory Greene, and Kyle Davis. The trio gather on Sunday evenings around glasses of beer, shots of bourbon, and a microphone in order to talk about pop culture, a smattering of news, and anything else that comes to mind.

They met one another through Paducah Improv. "The original plan was to do a Paducah Improv podcast," says Kyle. "Then the other members of the group heard the first episode and said, 'No, that is horrible!' And rightly so. We didn't want to stop doing it because we liked the drinking, so we started Ingenious Basterds."

"The drinking, from the beginning, was always an important part of the experience," adds Todd.

"There was no editing done," adds Todd. "We'd have two hour episodes of us drunken screaming."

"About Lord of the Rings," laughs Kyle. "It was basically a fraternity party."

With a little more organization and focus, the podcast introduced regular segments. "We tried to bring more order to the alcoholism," says Cory.

One of the recurring segments is Thunderdorm, a bracketed battle that takes something relevant to movies or pop culture and pits characters/people/animals/objects against one another in fights to the death. 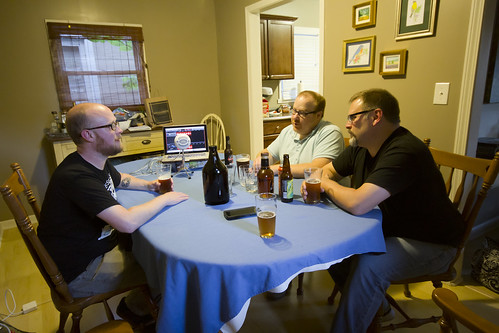 Over the summer, the Basterds did one related to the Olympics. "It was all fictional athletes," says Cory. "So one match was Ernie McCracken from Kingpin vs. Seabiscuit. And we each wrote made-up olympic events and randomly drew and debated."

"And the drunker we get, the more offensive it becomes," says Kyle. "We have some episodes we should probably delete. They are offensive to all humans."

"I think most people who listen are in on the joke," adds Todd. "They know we're being funny. It's comedy. We do love the human race for the most part.

"Satire is a style of comedy we're all attracted to," says Cory. "Saying these things is somewhat cathartic."

After sitting in with the guys during the recording of a show in Kyle's dining room, we get the feeling that this is exactly what they'd be doing even if it wasn't being recorded. "That's what it is," says Todd, "just hanging out. Sometimes by the end of a show, we've been talking and having fun, and I've completely forgotten that we're recording!"

To experience Ingenious Basterds, look them up on iTunes or go to soundcloud.com/ingeniousbasterds.