Raise a Glass For The Beauty Of Bourbon!
Add comment

Raise a Glass For The Beauty Of Bourbon!

Brian Shemwell pours a small taste of a deep ambered bourbon into a snifter. He holds it up, briefly inspecting its hue before he senses its smoky fragrance. He tilts the glass back to his mouth, savoring that first splash of flavor, mentally noting his first reaction and how the taste shifts and comes to fruition. This moment has been a decade in the making. The bourbon's aging is perfect.

He jots down a few notes: big oak, vanilla, and smoky charcoal. This is a good find, and Brian thinks his friends will agree as he jots down notes for the next meeting of the Paducah Bourbon Society.

When Brian took an interest in bourbon about a decade ago, he decided to learn as much as possible. He met Tom "Fish" Adams at a charity fundraiser, and the pair struck up a friendship over their love of bourbon.

"Fish had formed a society in Princeton–The Black Patch Bourbon Society," says Brian. "I went to some meetings and thought it would work in Paducah. I spent some time planning, working on a logo, and in April of this year, I put it out there. Our first meeting was in June."

Brian had no doubts of the Society's success. "The way people support local initiatives in Paducah is second to none," he says, "so I thought about thirty or so people sounded reasonable for our first meeting." Brian was shocked when 85 showed up. "I was blown away!"

His goal to have 100 members by the end of year was surpassed in just a couple of months. And just as the descriptions of bourbon flavors are diverse and varied, so are the Society's members.

"We have people from 22 years old all the way up to those in their 80s," says Brian. "There are doctors and sales people and those in the restaurant business. The demographics are wide. That shows the appeal that bourbon has. And we should be excited about it. It's our national spirit, and it's made right here in our backyard. It is economically and culturally Kentucky. We produce 98% of the world's bourbon. That's cool!"

And if being part of the Paducah Bourbon Society sounds a little intimidating, Brian simply says, "Don't be intimidated! Everyone is at different levels of experience. And at one time, everyone here didn't know a thing. We are always learning, and I know a lot more now than I did this time last year. So you don't have to be an aficionado. If you like bourbon in the least little bit, this is the place to be."

The meetings are educational, but Brian stresses that they are not classes. "This isn't night school," he laughs. "Kane Roberts at Roof Brothers has a huge part in selecting our bourbon of the month. He derives some tasting notes, I introduce it, and he talks about. Best yet, we all get samples.

"And there's no wrong answer when it comes to bourbon. There are bottles from $9 up to $300 and more. But expensive doesn't always mean better. As the saying goes, 'There's no bad bourbons, only better ones.' And it is very subjective. It's simply a matter of what you like. The Society simply allows members to try bourbons they haven't experienced before."

As members gather, taste, and talk, it become obvious that bourbon, shared socially, has an incredibly powerful side effect.

"Yes, we are learning and increasing our knowledge, but we're also meeting with people who have a shared interest," says Brian. "The conversations are wonderful. It is simply a good time with good people and a lot of good laughs. It is people from all walks of life. That's what bourbon is all about: people and sharing. That kind of feeling is infectious!"

For more information on The Paducah Bourbon Society, visit their Facebook page. 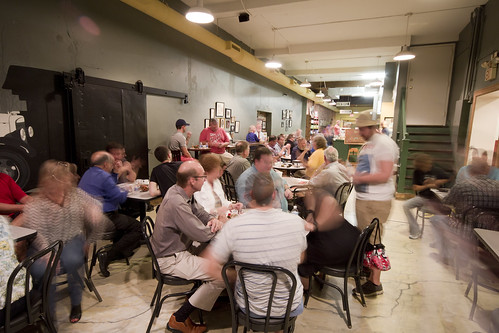 Thoughts From A Member

"It's the king of liquor," says Tim Hart, Paducah Bourbon Society Member. "Call me old-school (or Old Fashioned, my favorite cocktail, by the way), but I really enjoy a bourbon at 6 p.m. and dinner at 7 p.m. It just helps finish off the day. I don't have one every night, but I try to have this experience once a week."

Tim, who was looking for an alternative to heavier drinks, had a penchant for mixing drinks. So he educated himself first about Scotch. "I wanted to experience some of the classic drinks and liquors. So I learned the technique of proper sipping, breathing, and the use of some good water to help open the flavors. I tried the same techniques with bourbon, and it really opened my eyes. The taste and flavor appealed to me. I found that bourbon has a much more consistent experience than Scotch. I've never had a bourbon I didn't like!"

Through The Paducah Bourbon Society, Tim has learned even more. "I've been exposed to some new aspects of the distillers and their processes. That makes the tasting more memorable…

"And the fellowship is just fun!"