The unexpected revelation of historical, advertisement artwork has created quite a stir in downtown Paducah.

The demolition of the Ethan Allen Carriage House building on North Third uncovered a large mural on the neighboring building. The painting, featuring the face of a stately, grandmotherly figure, advertised Dr. Bell's Pine Tar Honey and is a grand example of a painted ad once common on most of our downtown businesses.

The building at 126 North Third once housed the E.E. Sutherland Medicine Company. Founded in 1894 by Sutherland and Dr. Bell, the firm manufactured, patented, and sold medications worldwide, reaching all of the United States, Mexico, Cuba, South Africa, and more.

One of the firm's best-selling products was Dr. Bell's Pine Tar Honey, a cough syrup. Ads boasted that it gave "quick relief and permanent relief in grippe as well as coughs and colds." A satisfied customer once wrote that "My mother had a cough for five years, and some nights she would have to sit up all night. She has taken six, twenty-five cent bottles of Dr. Bell's Pine Tar Honey, and it has cured her!" 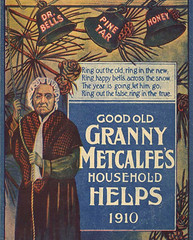 Dr. Bell's spokesperson was "Good Old Granny" Metcalfe, a Woodford County native who moved to Paducah at the age of 83. She lived to be 89, maybe because of or in spite of Dr. Bell's elixir.

She became the face of the medicine, and her visage continued to be associated with E.E. Sutherland after her death. She appeared on the cover of a small book in 1910 which was titled Good Old Granny Metcalfe's Household Helps.

The revelation of the artwork is once again a reminder that we, as a city, are stewards of a rich tapestry of history. And simple things such as this artwork highlight Paducah's uniqueness, generating a great deal of interest in areas such as downtown.

J.D. Wilkes, in his Instagram post about the uncovered artwork, aptly encouraged "Paducah to preserve this ghost sign. Our flood wall murals are cool because they tell our history, but this mural IS our history! It is therefore all the more relevant & fascinating for Paducahans and charming for tourists (who will really love this, by the way). It's something you can't recreate. And it's something younger tourists of the Instagram generation will love. Tourists flock to towns with charm, not Wal Marts. They already have those at home." 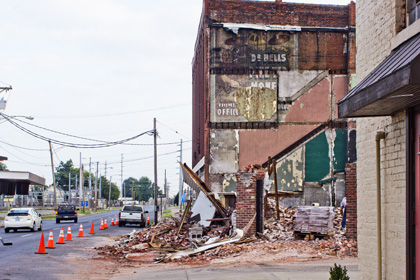