Reverend W.G. Harvey: One Man’s Journey on the Road to Civil Rights

The Emancipation Proclamation, Abraham Lincoln’s executive order freeing slaves in the United States, went into effect January 1, 1863. Yet over a century later, full freedom for black Americans was not yet realized.

Segregation was fully entrenched in the hearts and minds of many Americans, and even though all were declared free by law, black Americans were denied the use of many public facilities, businesses, and accommodations. By the mid-1950s, the tension between freedom and imposed oppression began to boil. And by the early 1960s, the South looked as if it would implode under the weight of coming change.

Paducah was not much different from most southern cities. Blacks were not allowed to eat in restaurants. They could not go to many of the local theaters and were restricted to the balcony that had a separate outside entrance at the Columbia. Restrooms in public buildings were segregated, and even a cold drink machine, which was literally painted half black and half white and had dispensers on both ends, was installed at a city maintenance facility.

Law would soon make such discrimination illegal, but it would also take some brave men and women to be the first to cross the barriers and ensure freedom was being upheld. Paducah had many heroes in the fight for civil rights. At the helm of the movement was a young man from Boonville, Indiana, a town of about 5500 people just eleven miles from Evansville. Wardelle Harvey did not know much about segregation as a young man.

“We did have separate elementary schools in Boonville, but the high school was always fully integrated. My mother went there and so did I. I worked at the finest restaurant in town washing dishes, and the owner eventually made me the cashier. So I didn’t know about segregated restaurants and businesses.”

When he went to work at Chrysler Corporation in Evansville, he began to see the problem first hand. “It was a much bigger issue there. Swimming pools were segregated, the bus station was segregated.” After accepting a call to preach, W.G. Harvey attended Tri-State Baptist College in Evansville.

In 1956, he traveled to Denver, Colorado where he met, for the first time, a fellow preacher by the name of Martin Luther King, Jr. “I knew his father, and we ended up staying in the same hotel there in Denver. He was really just starting his rise at that time. I was still a young fellow at the time, and it was just great.” Rev. Harvey later met with Dr. King in 1959 in his Atlanta home. “He was completely down to earth, the common man’s common man.”

Harvey returned to Evansville and went to work. “We had some successes there, meeting with business owners and city leaders. But there was a great deal of resistance.” He worked with the Evansville Ministerial alliance and the Baptist Ministerial Alliance to help fight discrimination, and from the beginning accepted Dr. King’s view that non-violent protest as the way to go. “It was the way that was most like Jesus. He loved people and was not violent.”

In 1962, Rev. Harvey was asked to come to Paducah and lead Harrison Street Baptist Church. “Paducah was different than Evansville. Both were fully segregated, but the segregationists were more die hard in Evansville. Paducah seemed ready by ’62, and the door was ready to be opened. I became friends with W.C. Young. He had the same heart I had, and because he was born and raised here, he had more credibility with the community.” 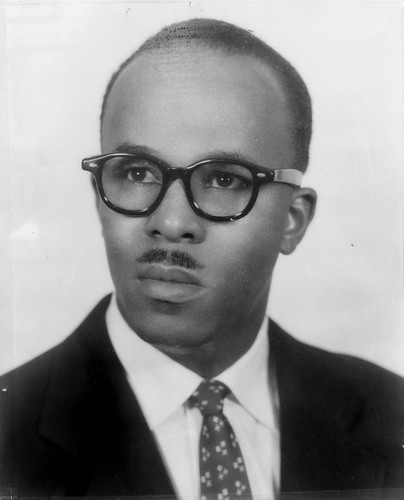 The pair formed the Non-Partisan League of Paducah in order to break down the race barriers in Paducah. One of their first victories was the desegregating of Paducah theaters. “I met often with Mr. Keiler, the owner of most of the theaters in town, and by 1963 he had agreed to fully segregate all of his theaters. He did it in phases between July and October of that year. There was never really an issue, but it did take some talking and coming to an understanding with one another before it could be accomplished.”

In 1964, Harvey and Young traveled to Washington D.C. to meet with Kentucky Senators John Sherman Cooper and Thurston B. Morton to ask them to vote for closure on the Civil Rights Bill. It was immediately following the meeting that Morton first publically committed himself to vote in favor of the bill. Cooper would later support it as well.

A march of Frankfort, KY was also coordinated in 1964 with Martin Luther King, Jr. leading the charge. Harvey and Young along with others from Paducah attended the demonstration at the capitol. Also there were Jackie Robinson, Ike and Tina Turner, and Peter, Paul, and Mary.

“Paducah had already come a long way by then. Once again, I think everyone was ready for the change. We met with business owners and civic leaders, and many were agreeable. But it took someone to go in and cross that line in order for it to be a reality for everyone.” One example of that was Boswell's restaurant.

Boswell's was a Paducah landmark. "That was one of the best restaurants in that day," recalls Rev. Harvey. "I came from a place where I was the head cashier in a restaurant, but in Paducah, I couldn't go and sit down in any of the restaurants. One day in 1963, me and my church secretary decided we were going to eat lunch at Boswell's. We walked in, got some stares, but were served by the waitress. Albert Karnes, who was commissioner at the time, walked over and let us know this was the right thing. I think Paducah was ready for it. Ten years earlier, it may have been a different story."

The Non-Partisan League also formed its own employment office at Harrison Street Baptist Church. "We found many places would just toss out the applications of black people without any consideration. So we kept up with info on people looking for jobs. When one came open, we'd go to the employer with some candidates and let them know that we had folks who were qualified." The group also informed black citizens about their voting rights and helped many get registered and to the polls on election days.

In 1964, Harvey and W.C. Young travelled to Washington D.C. to meet with Kentucky Senators John Sherman Cooper and Thurston B. Morton to ask them to vote for closure on the Civil Rights Bill. It was immediately following the meeting that Morton first committed himself to vote in favor of the bill. Cooper would later support it as well.

A march on Frankfort was also coordinated in 1964 with Martin Luther King, Jr. Harvey and Young, along with others from Paducah, attended the demonstration at the capitol. Also there were Jackie Robinson and Ike and Tina Turner. Two years later, the Kentucky Civil Rights Act was passed. Dr. King called it "the strongest and most comprehensive civil rights bill passed by a Southern state."

In 1967, Rev. Harvey ran for Paducah City Commissioner. "I didn't just go to the black community, I went to all voters. I felt I needed to represent everyone." Rev. Harvey remembers knocking on one door where a black maid answered. "I told her why I was there and that I wanted to talk to the homeowners about my candidacy. She told me I'd have to go around back, I went to the back door and met with the lady of the house. We talked for a while, and before long, she'd brought out coffee and sweet rolls. As I was leaving, she told me I had her vote. Then she led me to the front door. She said that if I ever visited her home again, I was to use the front door." 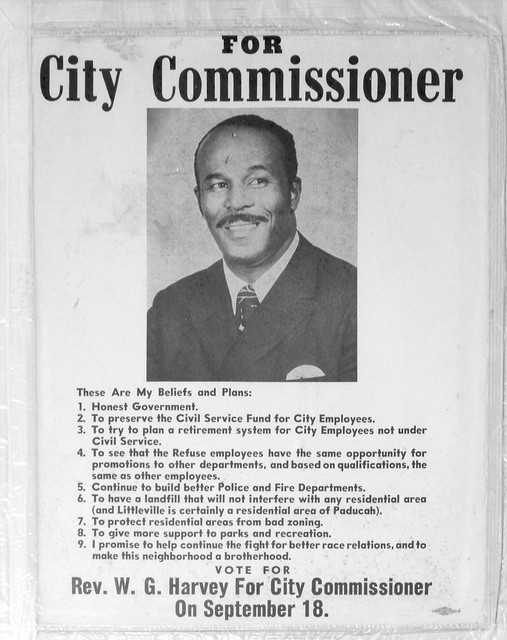 Rev. Harvey became the first black commissioner in Paducah as well as the first black American to be elected to any public office in all of West Kentucky. By 1974, Rev. Harvey decided not to seek re-election in order to focus on church work, Much progress had been made by that time, but it was in the summer of 1975 that he encountered one of the most unique situations of his life.

"The Ku Klux Klan decided to hold a rally in Paducah. They'd gotten a permit to meet at the Civic Center on Park Ave. Because it was held there, the city rules stated that it had to be open to the public. It was on a Sunday, and when I got done preaching that morning, I asked if anyone in the congregation wanted to go to the Klan rally with me, They all thought I was joking, but I wasn't. When I got there, there were two black men being loaded into an ambulance. They had been beaten. But I decided that if it was a public meeting by city rules, I was going in. I went up to the door, opened it, and walked right in. A robed man told me I couldn't come in, but I told him I was going to and walked right on past. There was about 200 people in there. David Duke was the Grand Dragon at the time, and I sat about 15 feet in front of him. I heard people talking about me and calling me nigger. I sat next to the editor of the Paducah Sun. He leaned over, smiled, and said, 'You know you're crazy, right?'

"A lot has been done in Paducah. Our community has been very progressive and strong," says Rev. Harvey. "All men are created equal. Consequently, everyone ought to be respected simply because he or she is a fellow human being."