Rhythms of the River

The weighted air held the world still on a sweltering August day in 1895. The Paducah harbor, lined with steamboats and packet boats, remained relatively lifeless with the exception of the roustabouts. These local men, hired to load freight, packages, mail, and passenger cargo, rushed about their labor, broiling in the afternoon sun.

In the midst of the oppressive work, one could hear an unexpected sound. Voices rang out in song.

"Ohio River, she's so deep and wide. Lord, I can't see my poor gal from the other side. I'm going to river, take my seat and sit down. If the blues overtake me, I'll jump into the river and drown. I've got the blues… I ain't got the heart to cry"

The rich tapestry of the roustabout harmony swirled about and cooled the summer air, encircling the boats and wafting across the water to the banks of Illinois. From there, they drifted and darted up and down the waterways, slowly dissipating into the humid air.

Nearby, three-year-old Mary Wheeler sat with her family on the front porch of their Paducah home. The songs of the roustabouts journeyed their way to Mary's ears, sparking a love and curiosity about folk music that would guide the rest of her life.

"Mary Wheeler was way ahead of her time, that's for sure," says Nathan Lynn as he reflects on the life and work of the famed musicologist and Paducah native.

Nathan, a Special Collections Assistant at the McCracken County Public Library, probably knows Mary better than just about anyone else, even though the two never met. He's been intimately involved in her work for a couple of years now, and the results of his research are now available for the public to see, read, and hear.

"She was born in 1892 did a lot of traveling early on," he says. "She studied music and lived and sang in places like Chicago, New York, and Washington D.C. She even served in Europe during WWI."

Not only was Mary well-traveled by early twentieth century standards, she was highly educated, earning a bachelor's degree in voice and a master's in musicology. In 1926, she taught music at the Hindman Settlement School in Eastern Kentucky. While there, she interviewed locals, learning about the mountain music traditions. In 1937 she published Kentucky's Mountain Songs, a collection of music gleaned from her time at Hindman.

She returned to Paducah to teach at the Paducah Junior College and learn about another form of Kentucky music that she'd known about since she was a child.

"She was fascinated by the roustabouts," says Nathan. "They were men who worked along the river, loading and unloading cargo from packet boats. They were usually black men who would sing while they worked in order to lighten the load. She was familiar with their style of music. She grew up here near the river, and her nanny had worked on a boat. She heard a lot of these songs growing up. When she came back to Paducah, she started visiting these shanties and cabins up and down the Ohio, talking to the men and women who had worked on the boats. They'd sing the songs they knew, and she'd take down the lyrics and hand write the music.

"This was really one of the last, untouched genres of true American folk music. Here in Kentucky, you had Appalachian, Bluegrass, and jug band traditions. And here in Western Kentucky, guys were riding all the way down to New Orleans, mixing what they knew with the Delta Blues. Roustabout music is working class music and it is a distinct class of music.

"There are work songs, songs about boats, soundings, spirituals, songs of meditation, love songs, dance songs, and one of my favorite categories, songs of lawlessness!" 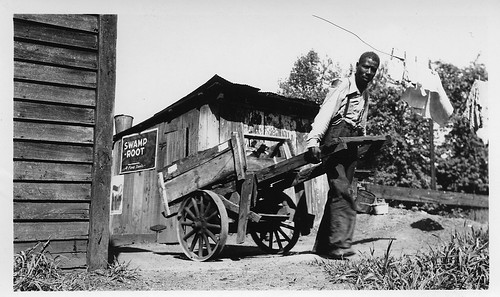 As Mary travelled the Ohio River basin, she collected as much information as she could including bios of those who shared songs, photos of the roustabouts and the boats they worked on as well as the photos of areas where they spent most of their time.

In 1939, Mary published Roustabout Songs: A Collection of Ohio River Valley Songs. "She had all these photos of Paducah and the roustabouts as well as handwritten and typed notes about them and their songs. It was an amazing collection."

Bertha Wenzel, Mary's niece and vocalist, kept Mary's discoveries alive by performing the roustabout songs across the country. Hunter S. Thompson once saw Bertha sing, mentioning it briefly in one of his articles.

Before her death in 2011, Bertha donated Mary's work and many of her personal items to the library. Nathan, along with Zach Underwood, Aaron Williams and Matt Jaeger, immersed themselves into the life of Mary, digitizing documents and photos.

"We are pulling all of this together onto our digital site, making it available to everyone. I am at a point now where I can link a song to a name and a name to a photo of a roustabout and a boat. And we can really bring these roustabouts into the forefront of this genre of music. We can go to the census records and find out where they lived and who they were."

Nathan will also be taking the roustabout story on the road to the centennial Festival of Riverboats this fall where he will have a display detailing Mary's work.

"She dedicated so much of her life to this. If she hadn't, these songs would be gone. The library is very excited to put this collection together. She once lived in a home on the block where the library sits. Now we can preserve her work on the same property she called home."

Nathan's interest in Mary's work goes beyond the academic. As a folk musician, Nathan treasures Mary's preservation work and he, along with Josh Coffey and Eddie Coffey formed the Wheelhouse Rousters to record and bring the roustabout songs to a new generation.

"We picked twelve songs, came up with arrangements, and decided to record them. I initially wanted to do the recording on a boat. That, of course, is easier said than done. It became obvious, however, that the River Discovery Center was a perfect choice."

The trio laid down the tracks for their first album Steamboatin', which was released in August. 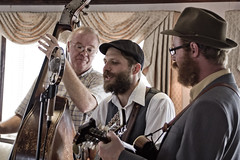 "There are some great songs on there, and we plan on working on some more. As a musician, I could probably give up writing and sing Mary Wheeler for the rest of my life!"

Some of Nathan's favorite songs include Under Dem Boilers Sleepin', Po'shine, and a song about infamous Paducah murderer George "Devil" Winston. "Now there is a genuine Paducah murder ballad!"

The songs of the roustabouts once again resonate through the streets of Paducah, wandering back and forth, carried about by the spirit of the men and women who first brought them to life and Mary Wheeler who tirelessly worked to preserve them.

The Mary Wheeler digital archive is available online at digitalcollections.mclib.net. Information on the Wheelhouse Rousters and their music is at wheelhouserousters.com.