Ten-year-old Terry Wilcutt’s feet were planted firmly in the outfield grass, his gaze targeted intently on the batter. His focus seemed unbreakable. Then he heard the roar and the boom. He dropped his baseball glove down to his side and trained his eyes upward into the azure sky. There wasn’t much that would draw the attention of he and his friends away from this game, but the sounds of the future were too much to ignore. It was the late 1950s, and the jet age was in full swing.

“They were starting to break the sound barrier publicly,” says Terry as he recalls his early interest in aviation. “We’d hear a boom and look up and see a silver jet streaking across the sky. I used to think that must be the most exciting job in the world.”

Being in Russellville, KY, halfway between Bowling Green and Hopkinsville, Terry was afforded little opportunity to explore his dreams. He’d never even been close to an airplane. The streaking jets thousands of feet above him were as close as he’d come for the time being. But he kept looking up, imagining who was in those planes and what it would be like to fly one.

Terry would later attend Southern High School in Louisville and then return to the Bowling Green area to attend Western Kentucky University. He earned a degree in mathematics in 1974, but never completely forgot the upward glances that, as a child, pulled on his imagination. He began a career teaching high school math in Louisville—but all it took was the slight opening of a door of opportunity to send him on a different and life-altering trajectory.

“I was lucky enough to have one of my younger brothers join the Marine Corps,” says Terry. “Kevin, my brother, sent me a note saying, ‘Hey, Terry, the Marines have got this guaranteed aviation program. So if you join the Marine Corps with this contract, they’ll send you to flight school. If you flunk out they’ll give you a rifle and send you to the woods. But if you make it then you’ll fly.’ That was all I needed.”

When Terry flew to Memphis for processing into the military, chasing his dreams of flight school, he boarded an airplane for the first time in his life. “That was the first time I’d been in an airplane. I used to joke that that commercial flight worked out okay, so I thought I would do well in flight school.”

And do well he did. Terry earned his wings in 1978 and trained on the F-4 Phantom. He later attended the United States Navy Strike Fighter Tactics Instructor program, otherwise known as TOPGUN. Yes, it is a real thing. In 1983, he became a F/A-18 Fighter Weapons and Air Combat Maneuvering Instructor, and in 1986 transitioned to the job of test pilot/project officer for Strike Aircraft Test Directorate (SATD) at the Naval Aircraft Test Center. Terry had more than fulfilled the dreams and wonders he had as a child. But the best was still yet to come.

Andrew Allen, a test pilot who had joined NASA, told Terry about his experience in transitioning to the space agency. Terry recalls that the conversation came at just the right time: “The Marine Corps wanted to send me for a one-year unaccompanied tour to Okinawa as the Assistant Admin Officer, because I’d done nothing but fly in the Marine Corps, and it was my turn to push paper. I disagreed with that. He talked to me and said, ‘Hey, Terry, instead of getting out of the Marine Corps, why don’t you consider putting in an application at NASA?’

“It’s interesting. In the Marines, I think you contribute to world peace and stability but in a threatening way, because if you represent a threat to us or others, a lot of times the Marines are sent in to correct that bad behavior. At NASA you contribute to the common good and world peace and stability by doing phenomenal things that inspire the world to turn their attention toward accomplishing great things instead of bad behavior. So once you think about things like that, then it became pretty easy to put in an application and choose one over the other.” Terry applied, was accepted, and was able to transfer to NASA as a Marine.

Terry worked several ground-based positions and served as Cape Crusader for a couple of Space Shuttle missions. The Cape Crusader helps process and prepare the shuttle for launch. “It’s something,” says Terry, “because when you’re sitting in there in the middle of the night setting up the cockpit, you can’t help but be filled with a sense you’re sitting in a national asset and an actual spaceship. Once you put the crew in a day later or a few hours later, they’re going to be launching in it.” 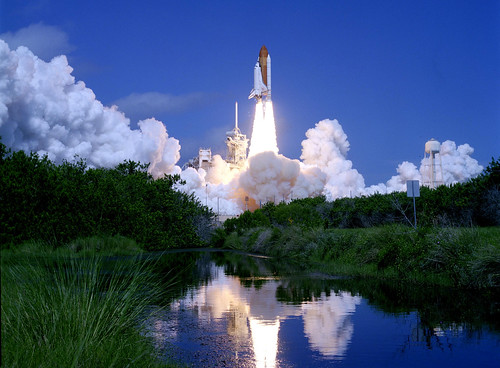 In 1994, Terry learned first hand what it felt like to launch a Space Shuttle when he was selected to pilot the Shuttle Endeavour for mission STS-68. “Of course the ride to space was pretty phenomenal,” says Terry. “That was just like you would expect it to be with over 7 million pounds of thrust. The Orbiter during solid rocket flight, the first two minutes, there was a lot of vibration, more than you would think. You’re just so happy to be there that it was just one of those ‘Wow, feel that!’” The mission was part of NASA's Mission to Planet Earth, a program dedicated to understanding the total Earth system and the effects of natural and human-induced changes on the global environment.

Terry piloted one more Shuttle mission then served as Commander on two more. All three of his last missions were joint ventures with Russia involving the space station Mir and the International Space Station. His final mission in 2000 was to prepare the International Space Station for its first residents. Terry spent time in Russia, training on docking with their station and systems. “It was really interesting to me considering I’d spent so much time in the Marine Corps with the Russians of course as the enemy, and now was going to go visit their space station. It was pretty remarkable.”

When Terry docked with the Mir space station for the first time and entered the Russian world in space, he was ready to get to work. With NASA, every moment is planned, every action pre-determined in order to maximize efficiency. “We basically said, ‘Valery [Russian Cosmonaut and Mir resident], where do you want all this stuff? Let’s get busy.’ He wouldn’t even talk to us. He just said, ‘Nyet, nyet.’ Russian for no. We had to sit around the table, and he gave us the traditional Russian salt and bread and some kind of rehydrated drink. It was quite an education in long duration spaceflight. I don’t think any of us really appreciated how much relationships matter in that kind of environment. It was great. We swapped stories, jokes, and ate Russian food. Then eventually Valery said, ‘Okay, now let’s talk about the work.’ He was certainly right about we needed to visit first and then get busy. It was a good thing. He’s an exceptional cosmonaut.”

Terry later transitioned from a member of the flight crew and now serves NASA as Director, Safety and Mission Assurance. He is often afforded the opportunity to think back on the days of his youth in Russellville, Kentucky where, as a boy, his dreams reached to the jets streaking across the clear blue of the sky. Little did he know then that he’d transcend the Earth’s atmosphere and come face to face with the stars. “One of the things that everybody enjoys when they go to space is looking out the window,” he says. “We were being paid to do that. Gosh, the Earth is so beautiful up there. It was just wonderful.” 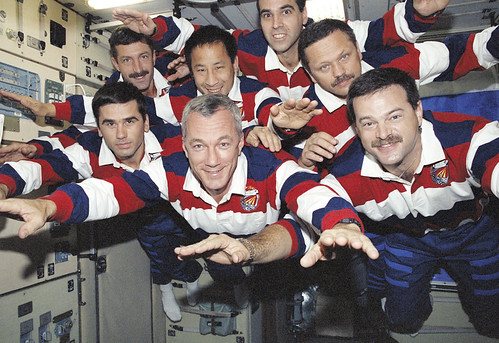