Four year old Spencer Balentine eagerly hopped into the passenger side of his daddy's coal black '49 Chevy. His feet, barely clearing the edge of deep bench seat, jutted out of the rolled up pants legs of his striped bib overalls. He rested them on the glass gallon jugs that occupied every inch of the floorboard.

Spencer looked to the driver, studying his father's face, as warm, golden beams of sunlight streamed through the window and enveloped the man he idolized.

Thomas Balentine put the Chevy in gear and gingerly lurched the car forward toward a slow roll away from the family home in Golden Pond, KY. Spencer kept his feet firmly planted on the glass jars. The car gently rocked with each bump and turn. Spencer listened to the rhythmic and melodic clanking together of many more jars in the trunk and backseat. He imagined there must have been hundreds of them.

The sun splashed across Spencer's smiling face as dust from the dirt road gently lowered back to the ground in the wake of the car, settling into childhood memory.

"Riding with my dad as he hauled moonshine that day is the very first thing I remember in life," says Spencer, now 60. "When I revived the nearly 100 year old moonshine recipe and filled my own jugs a few years ago, I heard that clunk of the jars and nearly teared up."

Spencer had no idea what moonshining meant in the mid-1950s. For him, it was just part of the family business. It went back as far as his great grandfather. By the time Spencer was four, the family business was an organization of uncles and cousins whose work reached legendary status.

"Grandmother owned Five Oaks Grocery in the Land Between the Rivers," recalls Spencer. "She was kind of a broker out of the back of the store, and we were really wholesalers. They had one main client down in Clarksville who probably distributed all over that part of Tennessee." 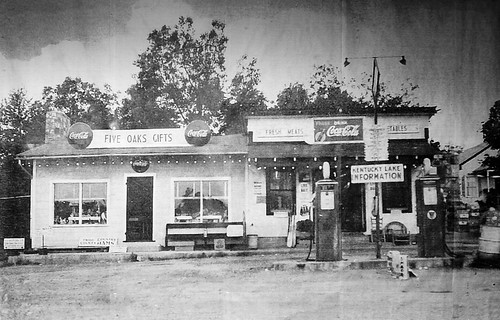 Their client's drop-off system was an elaborate drive-thru where vehicles would line up to enter an underground garage. Two men would unload the nearly 200 gallons of moonshine the Balentine's had brought. A woman would then pay the driver with cash in a paper sack just before the rear entrance of the garage was opened to allow for a quick exit. The whole process took about five minutes.

Spencer's uncle, David, who went on many of the runs to Tennessee remembers that the money was good. "I was working a forty-hour-a-week job and doing the moonshine at night," David recalls. "I could make about $100 a week from the 'shine, which would be equal to about $900 today."

The clandestine job was not without danger, however. Federal and local agents constantly searched for stills to bust. "I remember being out and cooking the mash one night," says David. "My cousin was stirring when we spotted a guy a little distance from us. He was just sitting and watching. We nearly about jumped. He spoke up and said, 'Don't worry, I'm not the law.' By then, my cousin was stirring faster and faster as he nervously replied, 'Are you sure?'

"We were constantly on the lookout. I swear Thomas could hear a twig snap for miles, and he could tell you if was an animal or a man."

Both Thomas and David Balentine ran from the law at various time, but neither were captured. Thomas encountered revenue agents on his way back from a run in 1959. After a hair-raising chase, he came upon a bridge where agents stood waiting. Thomas rolled out of the car which sped ahead and off the bridge into the Cumberland River below. He managed to get to the bottom of the bridge where he slowly made his way across, evading the officers who were in a desperate search for him. The crossing took seven hours while the Chevy sank in about six minutes time.

"Dad was always prepared," says Spencer. "He wore boating shoes so he could keep good footing on the gas and brake pedals. He'd also attached himself in the seat with his belt so he wouldn't go sliding all over in case he was chased."

One family member wasn't so lucky, however. Spencer's great uncle Casey Jones, did a stint or two in jail. For the family, however, it was like sending a company employee to gain continuing education credits. Casey, already an accomplished still craftsman, enlarged his body of moonshining knowledge from other inmates.

"He picked up a lot there," says Spencer. "He couldn't read or write, but he could do anything he set his mind to. He'd build amazing stills like no other, and the engineering behind them was amazing.

"He was the first person down there to have electricity. He'd set up a tractor motor to charge a system of batteries. A line ran down a hill to a little building that was full of lights, and he even had a jukebox. He was a brilliant man. He was kind of the architect behind the work."

The family's moonshining days came to close as the eviction process of area residents by the federal government continued into the late 1950s. Revenuers increased their efforts to bust stills as part of the clean up process, even bringing in former football players to run down moonshiners.

The family decided to leave the moonshine business behind in the Land Between the Rivers. Spencer became a championship motocross racer, eventually running and buying Town and Country Motorsports in Murray, bringing his father on board as an employee. Uncle David was convinced by a local lawman to become a deputy. Once running from lawmen, David busted a few stills early in his law enforcement career.

Spencer filed the moonshining memories away, never imagining that he would take up the family craft. "In 2009, I toured Maker's Mark. I remembered those smells, and it all came back to me. I decided I wanted to it."

After securing the proper licensing, Spencer distilled his first batch in a Casey Jones designed still. "I had our original recipe, which a relative had kept alive. It's customer tested for nearly a hundred years! I made 500 gallons, but here in a dry county, I couldn't even give it away!"

He founded his new distillery under the name Silver Trail, the name his family gave to the route they travelled to take moonshine into Tennessee.

>Spencer entered his LBL Moonshine in the prestigious SIP awards, winning a gold medal on his first try. From there, his life has been a whirlwind of activity as the distilled spirits nation took notice. 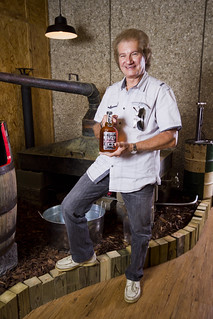 Distributors lined up to compete for the honor of carrying Spencer's products. Spencer attended a star-studded event honoring the memory of George Jones, singer of "White Lightning", where many country artists decided their favorite place to be was with Silver Trail Distillery gang.

Shortly thereafter, his moonshine was featured as one of the red carpet gifts at the Oscars where he rubbed shoulders with Hollywood elite and even had his photo taken with one of his favorites, Mickey Rooney. "I was told later on that our photo was probably the last one he was in before he died," says Spencer.

The Discovery Channel visited with Spencer in 2012 to work on their reality program Moonshiners. The main character, moonshiner Tim Smith, visits Silver Trail in order to find out what it takes to go legal.

And, in September, Spencer revealed that shooting is to begin soon on a new reality series based around his work and family history. While he was not able to divulge much info, the feeling one gets from the announcement is that it has potential to be a national hit.

In just a few short years, Spencer's family moonshine was well-known, and Spencer earned the admiration and friendship of Kentucky's top distillers. "I never imagined being part of nationwide craze," he says. "We just got into the state of Tennessee. It really has come full circle. We take our moonshine down to Clarksville, just not in the exact same way dad did."

The Silver Trail Distillery museum is located on Hwy 68 in Aurora, KY. Tours of the museum are free, and tours of the distillery in Hardin are $7. LBL Moonshine can be found in most local liquor stores. More information at lblmoonshine.com.