Special thanks to sponsors such as Flooring America for bringing stories to LIFE!

We lost more than just physical buildings. Each of these communities contained something less tangible–neighborhoods like these are ecosystems. They incubate communities and cultures that do not and could not exist elsewhere. -Matthew Halliday

Lower Town Paducah was lost, a seemingly wayward sentiment of yesteryear. Those who had grown up there wanted nothing more than to escape. Those who remained clung to shells—ghosts of antiquity. By the 1970s, overall prosperity in Paducah had increased for many, propelling them from the city’s older homes into newer houses in subdivisions.

Paducah faced a crisis. A portion of the city was crumbling, yet just blocks away, progress loomed. The city felt an increased optimism with the coming of the convention center and the Executive Inn. The goal of the proposed downtown loop, which connected I-24 between exits 4 and 11, put downtown Paducah back on the map after the interstate bypassed the core of the city. The future and the past didn’t appear to be compatible. City leaders sought to condemn properties just north of downtown, raze them, and commercialize the area. Then came Bill Black, Jr.

Bill a Paducah resident and an avid student of history, visited Alexandria, Virginia in the late 60s when he was in the Marines. Old Town Alexandria is a preserved historic district and neighborhood with buildings dating back to the 1700s. The old structures are now full of businesses and residences and are a major tourist attraction. “He was amazed at the condition the houses were in and how restoring a whole neighborhood had an effect on their economy,” says Bill’s son, Will Black. “When he came home and saw Lower Town, he had a vision to do the same thing here. He preached that restoring the homes would bring authenticity and integrity, and that would bring value. Dad knew that empty lots would more than likely remain empty lots. And it has proven to be true. For those Lower Town houses lost, we have empty lots to this day.”

“I looked at the number of properties slated for demolition that the Lower Town Neighborhood Association formed around,” recalls Anne Gwinn, “and it would have been $1.3 million in property valuation lost for the City of Paducah. It didn’t make sense to tear it at down.”

Lower Town, at the time, was at critical mass. Some homes had already been lost. Others were facing imminent demolition. Bill and a small group of others formed Walnut North, so named after the city’s original name for North 6th Street. They purchased the houses that were in the worst shape. Some were vacant, others were not.

“People were living in places where, when you went through the door, you had to be careful where you stepped,” said Chris Black, Bill’s brother. “Some people had been down there for a long time, living in homes that had been in their families for a hundred years.” They could not afford to do the necessary work to save them. They were clinging on, desperate for hope.

“That was one of the secrets of the success,” says Nancy, Bill’s wife. “It was hope for those living in that area. And that was contagious. It changed the perception they had of themselves. They were moving toward something they could be proud of. It was a metamorphosis. All of a sudden, we were united, in it together.” Bill spearheaded the Lower Town Neighborhood Association in an effort to foster that renewed sense of community. 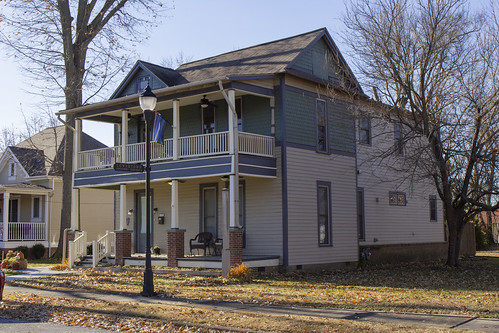 Opposition came. City leaders saw the neighborhood as unsalvageable and razing the area as “clean up.” Anne Gwinn, a member of Walnut North, plied her legal expertise on multiple occasions to protect homes from the wrecking ball. Sometimes, that came in the form of restraining orders. One such home that Anne helped save was the “cow house,” a residence at 527 North Sixth where a photographer snapped one of the most memorable photos from the ’37 flood having spotted a cow on the 2nd-floor balcony. There were occasions of Bill rushing to properties as someone started demolition that no one saw coming. Other times, it was a race against a demolition order.

“Sometimes you’d look at a letter of complaint as they were getting ready to issue a demolition order, and the cited items would be something like gutter falling off,” recalls Chris. “It wasn’t like there was a structural failure. There was a belief that the only option was demolition.” 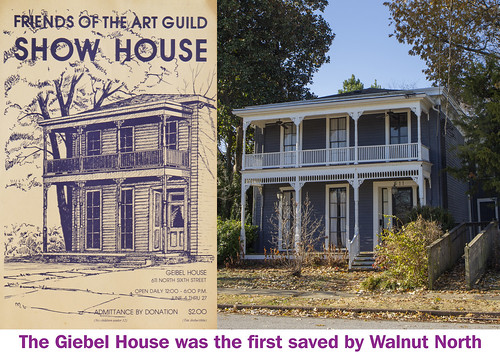 Walnut North members personally rescued many buildings which are now Lower Town icons. Their efforts also spurred others to move to the neighborhood, taking on restoration projects of their own. The streets were alive with activity. Dick Holland and others conducted walking tours. There were garden clubs. And Judy Bray filled the air with music with her song “Lower Town Shuffle.”

In addition to purchasing individual properties, Walnut North, along with Dick Holland with Growth, Inc., ushered in a historic zoning ordinance. Then, Lower Town was designated as a historic district followed by a National Register of Historic Places designation. Every step leveraged more power and potential resources in their favor. It also set the entire area up for future success.

By the early 2000s, the neighborhood had been held together, and many homes were saved. Lower Town then needed another boost to carry it into the future. The Artist Relocation Program was a successful venture that brought new residents from around the world into the neighborhood. But if it had not been for the efforts of Walnut North and people like Bill and Nancy Black, Anne Gwinn, Dick Holland, and many others, there may have been no neighborhood to save.

“Bill saw 26 square blocks of what could be a wonderful neighborhood,” says Anne. “It was a big risk. The city had other things on its plate, and not many were interested in the thought of preservation, especially with that many houses.”

“I remember regular discussions every night in the house about this property or that property,” adds Will. “And with every one lost, it seemed like it took a little piece of dad’s soul.”

“But it was so much fun to just be there,” says Nancy. “We didn’t quite know what the outcome would be. And it was risky. But we wouldn’t have turned loose for anything. It was a total mixture of every kind of person there. It was magical. It was something that didn’t seem like it should have worked—but it did. We were all working together.”

Today, Lower Town is not only a neighborhood for many Paducah residents, it is a destination, a tourist attraction on the must-see Paducah list. 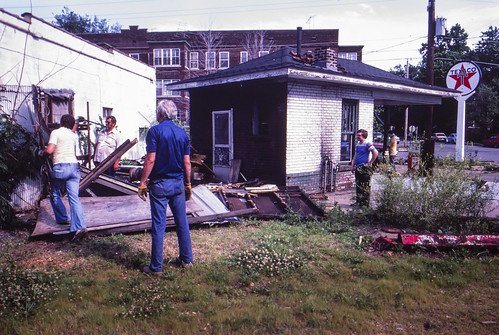 “Development through historical preservation must be done right if it is to remain a lasting source of pride in the community. If we do it right, we can integrate it with this exciting wave of new development into the great potential of existing areas of Paducah. The whole neighborhood stands a chance of being revived enough that it becomes a magnet neighborhood. We bough with the intent to set an example of what historic preservation could do to revive a declining downtown.” -Bill Black, Jr.

“There’s a period in a building’s life, usually between 50 and 70 years, when it has become less-maintained. It is very familiar to most everyone because it has been there during most everyone’s life. They’ve seen it consistently. Because of that, there is an apathy based on familiarity, its current condition, and a perception that it is out of style. If you can get across that gap, there is normally another generation coming that can look at something and think oh, that’s cool! City hall is a recent example. It suffered from that mentality but made it through.” -Chris Black 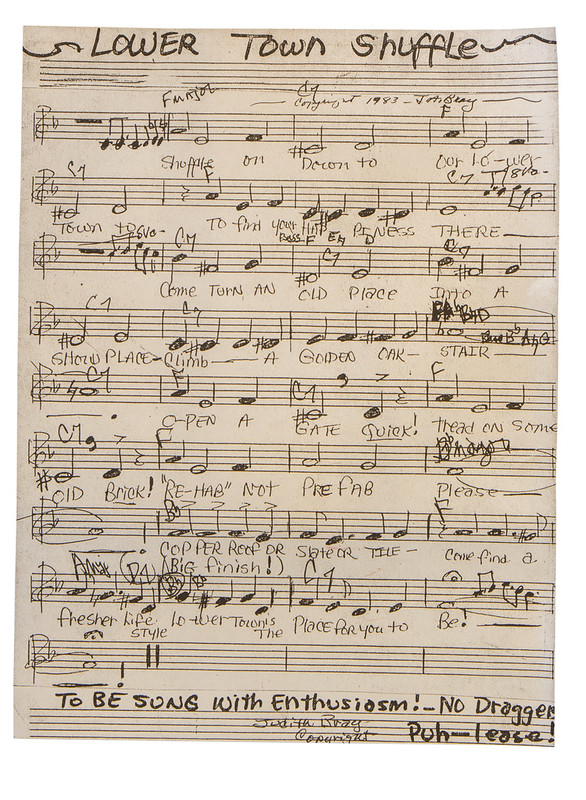