Mortal as I am, I know that I am born for a day, but when I follow the serried multitude of the stars in their circular course, my feet no longer touch the earth; I ascend to Zeus himself to feast me on ambrosia, the food of the gods. — Ptolemy

“You see photos of planets, of space—and they are amazing. But are they real to you?” asks Jim Hall as he turns his telescope to view a galaxy beyond our own. “I remember the time I looked through my first telescope and saw Saturn and its rings. Then, it was real to me. There was absolutely nothing between that planet and my eye. I saw it for myself.”

Jim, a member of the West Kentucky Amateur Astronomers, has been hooked on astronomy ever since that experience. “Saturn is a lot of people’s ‘a-ha!’ moment,” adds Jim Phfistner, Outreach Coordinator for the WKAA. The group is a collective of star-gazers who’ve had ‘a-ha!’ moments, and they want more.

“It started in the mid-eighties with the excitement of the visit of Halley’s Comet,” adds Jim Phfistner. “Astronomy became pretty popular during that time.” Since then, the group’s been combing the skies, seeking and discovering the great beyond.

The WKAA meets on a regular basis at the observatory in the Land Between the Lakes. The observatory and their clubhouse sits behind the planetarium building at Golden Pond. There are several club-owned scopes including the one mounted beneath the observatory dome. And most members set up personal scopes in the adjacent field. The location provides the club a perfect viewing spot due to the surrounding forest. The uniqueness of the LBL as a sizable, largely undeveloped plot of land means there are low levels of light pollutions which interfere with nighttime observations.

“It’s simply referred to as a dark sky,” says Jim. “There’s an International Dark Sky Association, and they’ve encouraged places like National Parks and places across the globe to lessen the light. We are losing more and more of our night sky due to light pollution.” The WKAA started a conversation with the International Dark Sky Association a couple of years ago and hopes to become an official dark sky location in the near future. 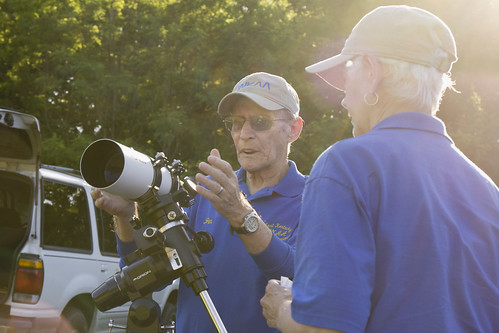 Not only do the club members have a passion for astronomy, they have a passion for sharing with the community. “We call them summer star parties,” says Jim. “The public is invited to come up and look through the scopes. We do that every other weekend, weather permitting. We also host astronomy day each year. We had over 800 people here that day. We do interpretations. One man in the club portrays Charles Messier, the Comet Man from the 18th Century. I dress in period costume as well and do Galileo. I encourage parents and children who are interested in astronomy to pursue it and talk to people in the club on how to get started.”

Jim credits his personal astronomy journey to the Navy where he was enlisted for a term in the 1960s. “I spent a lot of time at sea,” says Jim. “Those clear skies, you cannot match. You can’t see the night sky like that anywhere else. You get close on mountaintops and certain desert areas, but there was nothing like seeing the sky at sea. And now that I’m retired, I do this every day. I am committed to learning something new everyday in science in general but especially in astronomy.”

That kind of passion is repeated over and over among club members. Such thirst for learning has even led to new discoveries. “Our fame comes from club member Jay McNeil,” says Jim. “His passion is the Orion Nebula—and as he was taking photos of it using a three inch scope, he saw something he’d never seen before. The nebula is gas and dust and left over remnants from an exploded or collapsed star. He found some light coming out of that dark gas. He searched and searched but could not find any previous photographs of that patch of light he was looking at. After a good number of observations, he notified NASA, and all the big observatories around the world, and they jumped on the bandwagon. In less than six months, they verified that Jay discovered a new piece of the nebula—a new star being born. It’s a variable star. It was peaking out from behind that dust and gas. And it’s now called McNeil’s Nebula. There are billions of opportunities out there, and he found one.”

While discovering something new is certainly an exciting moment, the members of the West Kentucky Amateur Astronomers are happy observing what’s been known for a long time. Behind the observatory, on a pitch black night, there are dozens of people, all hardly visible. The show is in the sky as light from distant stars and planets rain down upon the gathered group and the optics of their scopes.

“You see this with your own eyes,” adds Jim Hall. “And I continually see the wonder and amazement on kids’ faces. That keeps me coming out here. The show also changes. You see different things at different times of the year. It’s a lifetime of learning and observation, and I don’t think you’d ever see it all!”

For more information including the club’s schedule and public viewing opportunities, visit wkaa.net. 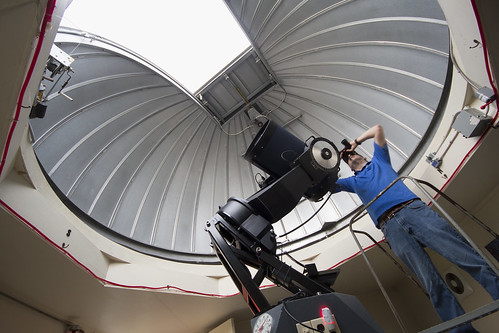 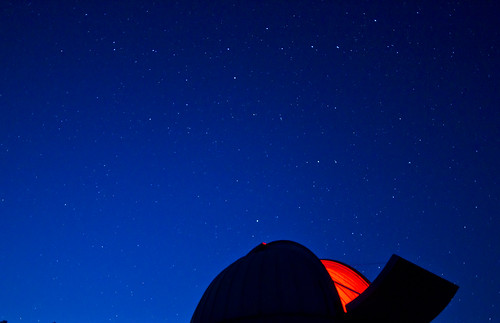