A Story About Antique Quilts

I am having SO much fun REreading these early PADUCAH LIFE Magazines and REconnecting to all these people who have been a part of our pages and a part of MY life. This article appeared in the spring (think quilting) edition of the magazine in 1992. Tracey Buchanan took a tour of Charlie and Gail Ransler’s quilt collection and put together this piece for our readers some 27 years ago. The photo is of a Roman Stripe pattern pieced quilt, circa 1930, from Holmes County, Ohio. It is mentioned in the article. This description is from the “Quilts of Illusion” by Laura Fisher. “In its vertical position, as shown, this vibrant quilt appears to contain black triangular tabs emerging form its surface, ready to be pulled to reveal an imaginary surprise. When viewed horizontally, black mountain peaks seem to progress up into a distant landscape amid a field of strips in desert sunset colors.”

A Story About Antique Quilts

(This article first appeared in the 1992 edition of PADUCAH LIFE Magazine.)

“The Atkinson quilt was handmade by my great-grandparents, Richard Hardy Atkinson, and wife, Jane Peacock Atkinson, around 1860. My great-grandfather was a wealthy landowner in eastern North Carolina having inherited 2,200 acres of and from his father, John Atkinson, who served in (the) Revolutionary War . . . Richard Atkinson helped his wife make the quilt at their residence in Goldsboro. He died in 1862 of pneumonia at age 28. His wife died in November 1905.”

So goes the story behind the Red Feather Festoon, one of the antique quilts in the collection of Charlie and Gail Ransler.

“The stories are what make these quilts so fascinating,” Gail said. “It was this quilt in particular that really got us hooked.”

The Ranslers, American antique fans, started collecting quilts about five yeas ago when they were looking for art to hang on their walls. Once they started learning the fascinating, and often personal stories, behind antique quilts they became enraptured. They now own around 20 and Gail said they’re always on the lookout for more.

The Red Feather Festoon hangs in their living room across from another prized quilt, a crib quilt that was used by the great grandchildren of Squire Boone, brother to Daniel Boone. The quilt is signed and dated, “Aunt Ruth 1834,” and contains some imported English fabrics as well as local period fabrics.

One of the most unusual quilts they own was made in the 1870s. The Log Cabin quilt is silk and wool geometric designs. It features parallelograms, pineapples, six-point stars, hexagons, pyramids and spinning tops.

Above their bed hangs a Roman Stripe pattern quilt form Holmes County. Ohio, an Amish community well known for quilts. This quilt was once in the Esprit Quilt Collection.

Another in the Ranslers’ collection came from a “house of soiled doves,” Gail said with a laugh, explaining that the term was the owner’s polite way of saying a bordello.

One of their quilts they believe was made by a family’s former slaves as a wedding gift. It is circa 1870. 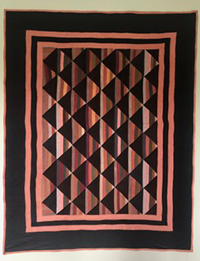 Around 1920, a lady named Nellie Markland designed and chose the fabrics for the Ransler’s Lone Star quilt. But, Gail said, after the ladies at the Hebron Lutheran Church finished quilting it, Mrs. Markland wasn’t satisfied with the results. She took it home, ripped out the stitching and did it again herself.

That quilt ended up winning a blue ribbon in 1928 at the Cincinnati Ties Star Quilt Show at Music Hall in Cincinnati. The Ranslers have the very ribbon it won. “Everyone wants to believe a good story,” Gail said, “so it’s very important to deal only with reputable dealers, or, even better, with the makers’ families, if possible. It’s also important to get any documentation, like a ribbon or a letter about the quilt. Those things help prove the quilt’s authenticity.”

Because of the history behind each quilt, they become personal treasures, she said. After they bought one of their most cherished quilts, they actually invited the former owners to “visit” it.

“To part with a piece of family history is very hard to do. But if they know it will be going to a good home where it will be loved, that makes it a little easier.”