Succulent Summer In The Depths Of Winter
Add comment

Succulent Summer In The Depths Of Winter

Nothing beats a homegrown tomato in July. The beauty of the vine-ripened fruit, bathed in the sun, is undeniable as we savor the delicate balance between sweet and tangy. Come January, we decry the lack of tomatoes as our options dwindle to imported, often flavorless varieties shipped in from hundreds of miles away.

But what if you could grow your own tomatoes and other plants year round and enjoy produce that has the delicious flavor of summer, even in the depths of winter? Paducah Hydroponics says you can!

"A lot of people are glad that they're done with those winter tomatoes from the store," says Bob Penrod, Sales Representative. "We hear that all the time from our customers. And they getting great results at home with hydroponics."

Hydroponics is a form of agriculture that involves supplying plants with light, water, and nutrients without the use of soil. Many are bringing gardening indoors, creating a controlled environment that is optimal for plants no matter the weather outside.

"Indoor gardening is taking on a whole new life," says Bob. "In traditional, outdoor gardening this past year, we battled aphids, spider mites, powdery mildew, and other problems. That's not a problem inside!"

Bob understands the difference hydroponics make. He has a lifelong history in farming. "I started as a kid," he says, "and I've been doing it in one form another ever since. I took horticulture in high school in '79, and our teacher asked if anyone was interested in doing some experiments in hydroponics. He taught about five of us how to do it. I ended up getting my first hydroponics set in the early 80s."

It wasn't a horticulture class that spawned the creation of Paducah Hydroponics, however. The seed was planted via online gaming.

"Our manager, Chris Merrill, played online games with Albert Farajian from California," says Bob. "Albert ran a website selling a variety of things." Chris, who worked in graphic design, started helping Albert with his site. One product that sold well was a hydroponic grow box. Chris decided that he could build boxes himself and expand the site's offerings.

"It started on Chris' front porch," says Bob. "From there, it moved to a garage, then into a manufacturing facility." Paducah Hydroponics now occupies a roughly 7,000 square foot building on Benton Road in Reidland, "We are a manufacturer more than anything else," adds Bob. "We do have a retail side here, but most of our business comes through the website where we now have over 5,000 products related to hydroponics."

Bob grows a handful of tomato plants, pepper plants, lettuce, and flowers in their retail space, showcasing the company's products. He also maintains several experiments, testing new products and approaches. "It's amazingly sustainable," he says. "And you can take a variety of approaches. There are simple systems where the water is gravity fed, and others that use pumps. Either way, you don't waste any water. At it's simplest, you can grow a 6 foot tomato plant in a 4-inch by 4-inch cube if you do it right."

Lighting ranges from incandescent bulbs to the latest in LED technology. Natural, nutritional additives and aeration options are available, and Bob has even branched out into cloning. "I use a cloning gel," he says. "I can take a cutting off a plant, use the gel, and within no time have another plant ready to go. It is much faster than seed. I've known people who have had plants for twenty years using cloning." 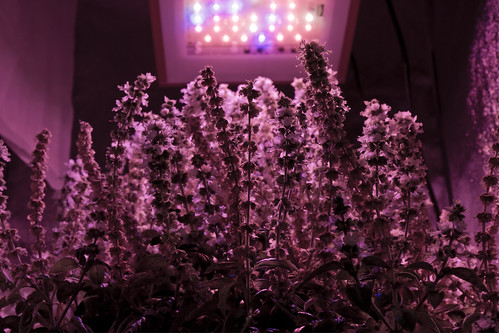 Another trend Bob sees is aquaponics, the combination of raising fish and hydroponics. "We had a customer come to us who said, 'I want to be able to put good, healthy food on my grandkids' plates.' He started doing indoor aquaponics by raising tilapia and growing his own vegetables. The plants feed the fish, the fish feed the plants, and the plants clean the water. Talk about sustainability!"

Even with all the success, Bob feels like they are only scraping the surface of the possibilities. "A group built a $56,000 greenhouse in Fulton," says Bob, "and started growing hydroponic tomatoes. The results were amazing, and they got three-times more for the tomatoes than they thought they would. Their buyer said they'd take all they could grow, and, if they'd triple their operation, they'd take those too!"

Bob relishes such stories. "The best part of this job is when someone calls and says they've outgrown their grow box, and they have tomatoes everywhere! People are having great results, they know where their food is coming from, and they are becoming more self-sufficient. This is the future of gardening. It's better, faster, and it seems that there is no stopping the possibilities."

For more information, visit Paducah Hydropnics on Benton Road, or go to dealzer.com.