The Fruits Of Their Labor: Lessons In Life, Love, & Peaches
Add comment

The Fruits Of Their Labor: Lessons In Life, Love, & Peaches

“Life is a succession of lessons which must be lived to be understood.” ― Ralph Waldo Emerson

Cozy rays of summer sun nudge their way through the leaves of the trees of the neatly-rowed, peach tree orchard. The grass is still wet as even the dew has not been aroused from its slumber. Not a single sound is heard. All appears asleep this early in the morning. 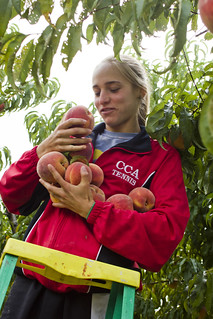 In a distant corner, however, there is much activity underneath the blankets of green. The work is silent, but diligent. Carson Brown is perched high atop a ladder. Her eyes are resolute as her hands dart back and forth, selecting only the readiest of peaches. She works with great intention, and her mind is focused on the task at hand; but she constantly carries the thought that the trees aren't the only ones bearing fruit.

Carson and older sister Shelby have been working the peach orchard for over eleven years, more than half of their lives. They aren't just harvesters, however. They are the owners and managers of Hillcrest Orchard in Cunningham, Kentucky.

The girls' parents, Craig and Lee Ann, planted the 200-tree orchard in hopes of raising more than peach trees. "When I was a kid, tobacco was my summer project to make some money," says Craig. "I wanted my girls to have the same opportunity for a summer job, so we planted the peach trees. It is an amazing way to learn. They could gain the experience of owning something and working, even with the possibility of not getting paid if there wasn't a harvest."

"They learned how to budget over a year," adds Lee Ann. "They received their entire paycheck at the end of the summer. They had to deal with record keeping, maintaining crop insurance and records, hiring and paying employees, and paying taxes."

Shelby remembers having to turn a portion of her income over to the government. "I used to get so mad that dad would tell me months after the harvest that I owed money for taxes," she says. "I was twelve and paying taxes!"

When asked about the early harvests, the memories are a bit vague for the girls. "I remember the crates left marks on my hands!" says Carson.

"And I would squeeze the peaches to see if they were ripe," adds Shelby. "It left hand marks on them!"

Craig and Lee Ann's vision for major life lessons were a little fuzzy for the girls initially. But before long, the sown seed produced fruit.

"I was frustrated at first," admits Carson. "My friends were staying up late during the summer,and I was going to bed early. But I discovered that I liked being in the orchard, and I ended up loving it. It grew on me!"

"We learned reasons why," adds Shelby. "We couldn't stay up late because we had to work early. We wanted to be ready in the morning to be out by 6am and not be cranky." 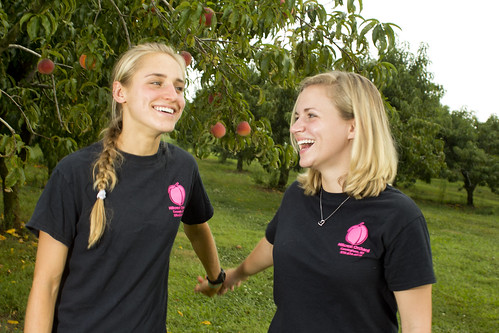 Natural talents also emerged as Carson discovered a love for agriculture, and Shelby gravitated toward sales. "I like going to the markets," says Shelby, "and talking to different people. Carson loved being with the trees. We'd harvest, and I would think I had gotten all I could out of a tree. Carson would climb up there and find more! She'd get up there so far that all you could see was the tree shaking."

Before long, the girls realized the financial rewards of their labor. "We started having bigger harvests," says Shelby, "so we could sell to farmers' markets. Bennett's Market loved them, and they are still a big customer. Midtown Market now sells them during season."

And throughout the orchard's history, one of their biggest retail locations has been the Brown family back porch. Fresh peaches are a fixture along with a simple can to collect money. The growth of harvest revenue accompanied by newfound budgeting knowledge afforded the girls the ability to purchase their first cars once they reached driving age.

"The orchard has been a huge help," says Shelby. "I can now budget and plan for a household. I was the financial director at a church camp this year, and I had the ability to do that because of the peaches. It also made me a better employee. I've hired people here who did not work very hard, and that affected the end result. So now I know that a good employee is focused, respectful, knows good time management, and is hardworking."

"The work has to be done," adds Carson. "If certain tasks aren't completed on time, there are consequences–most of them rotten peaches. The orchard goes on one way or another, even if you don't."

Lessons of the orchard abound, even beyond the financial. Shelby recalls some of her first experiences in pruning. "You have to lop off branches, and you feel like you are hurting the tree. It was difficult at first. But for the tree to produce the best fruit, some things have to go. If you don't, it will hurt it more in the end. So there has to be faith that what you are doing is good and that they'll turn out."

The entire family has also learned what it means to depend on one another. "Mom and dad helped, and I am grateful for that," says Shelby, "because they didn't have to. They were here and gave us advice. We'd be out there for hours together, so we learned to pull together and get along. It was always good; unless dad decided to chuck a peach at me!" 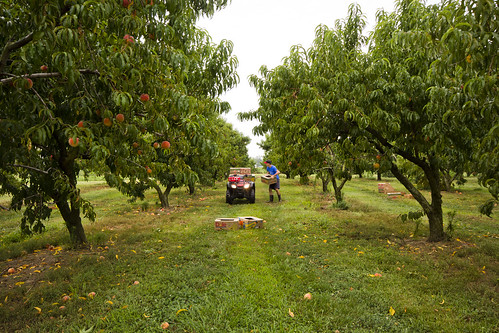 "It has accomplished what we wanted it to," says Lee Ann. "Our world is full of peaches, and everything stops moving for us when the peak hits in July. I see all the lessons they've learned, and Craig and I have been able to spend some great times with the girls."

"Just about any aspect of my life can be related to the orchard," adds Shelby. "I can point to anything and say that peaches taught me something."

Shelby and Carson are now college students but come home in the summer to work as much as possible. They still own the orchard and hire and train help to make sure the daily tasks are on track.

Craig and Lee Ann sit in their living room, looking out over the orchard and reflecting on what peaches have done for their family. They've raised more than peach crops, they've raised two outstanding young women. Lee Ann's eyes grow damp as she watches the trees sway in the breeze. "There are a million lessons out there."

Note: Due to the harsh winter, local peach trees did not produce fruit this year. This is only the second time in Hillcrest's history that this has happened. Be sure to look for Hillcrest peaches in 2016!