The History of Coke & the Future of Beer
Add comment

The History of Coke & the Future of Beer

The story goes that when Luther Carson was rescued by boat during the 1937 flood he remarked to his boat mates that when he reached dry ground that’s where he planned to build his Coca Cola bottling building. That high point turned out to be at the corner of Broadway and Lone Oak Road.

The building Carson and his team of architects envisioned became a virtual landmark at what was then a most westerly vantage point of the growing city of Paducah. The architectural marvel drew the admiration and affection of Paducah’s residents and became a local point of pride. The rippling neon Coca-Cola sign was the beacon of a business that would, even into the 21st century, provide economic vitality to a burgeoning community as well as a future generation of resources that would ultimately underscore many benevolent projects in Carson’s hometown.

The Coca-Cola plant, the building’s epithet for 75 years now, was the dream of one man to create a structure that would not only house an innovative new idea, but would also stand as a representation of imaginative design.

The dream lives on.

Very soon gleaming tanks will be installed within the vintage brick walls of Luther Carson’s architectural brainchild. Once again the innovative ideas of a master brewer will be crafted on the concrete foundation of a bottling past. History will repeat itself in a new century as Dry Ground Brewing Co gets up and running at the “Coke plant.”

And this virtual homecoming of a refreshing history is more than just a new manufacturing mechanism for the site. It’s also the return of a native son.

Brewmaster Todd Walton grew up in Paducah. Owners Ed and Christian Musselman have given him a reason to return.

“When we purchased the building,” says Ed Musselman, “there was always the prospect that this would be a perfect backdrop for a craft brewing operation. That didn’t happen overnight. We were more than willing to wait for the right person and the right fit before we made the final decision. Now we are assured that we have found the person with the authenticity and the skill set to make our dream a reality.”

Todd Walton left his hometown in 1993. And both Todd and Paducah have developed many new characteristics since then.

“I am so proud of what has happened here,” says Todd. “I’m proud of the revitalization efforts that have been made by the community and its leaders to create an environment that I think is perfectly poised for new ventures like Dry Ground Brewing Co.”

Todd has added a few experiences to his resume as well. In his time away from western Kentucky he has learned the art of craft beer brewing with stints at breweries ranging from Oregon and Washington state on the west coast to most recently Asheville, NC. Todd even created his own craft brand at Trinity Brewing Company in Colorado.

This trio of entrepreneurs quickly found common “ground” when they began the conversation of taking the Coke plant down the path of becoming a craft brewery.

“What I got from these guys,” says Todd, “was a commitment that I would have complete creative freedom with the brewery. That was paramount to my decision to move. There was so much openness and respect from Ed and Christian when it came to our plans for the operation that I was excited to have this opportunity to develop a successful business back here at home.”

That feeling is mutual. “We are really happy to have found a partner that has the knowledge, the experience, and the passion for this craft,” adds Ed. “We believe that Paducah is poised to build a community of craftsmen in this arena. And we are really looking forward to being a part of that new potential.”

Despite the fact that any business makes or breaks based on dollars and cents, Todd and the gang take the view that there’s more to success than merely the bottom line. “I’ve always joked that your success is based on how many babies and kids and dogs you have running around the place,” Todd says with a grin. “To me craft beer is more than a product. It’s a culture. It was created based on ‘community’ which means being a neighbor, making people feel comfortable, and giving back to the place you call home.”

According to the Brewers Association an American craft brewer is small, independent, and traditional.

-The hallmark of craft brewers is innovation. Craft brewers interpret historic styles with unique twists and develop new styles that have no precedent.

-Craft brewers tend to be very involved in their communities through philanthropy and volunteerism.

-Craft brewers have individualistic approaches to connecting with their customers.

-Craft brewers maintain integrity by what they brew and their general independence, free from a substantial interest by a non-craft brewer.

-The majority of Americans live within 10 miles of a craft brewer.

Thankfully that is now true of many people in Paducah! 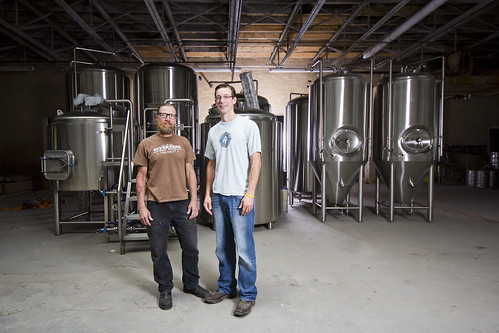